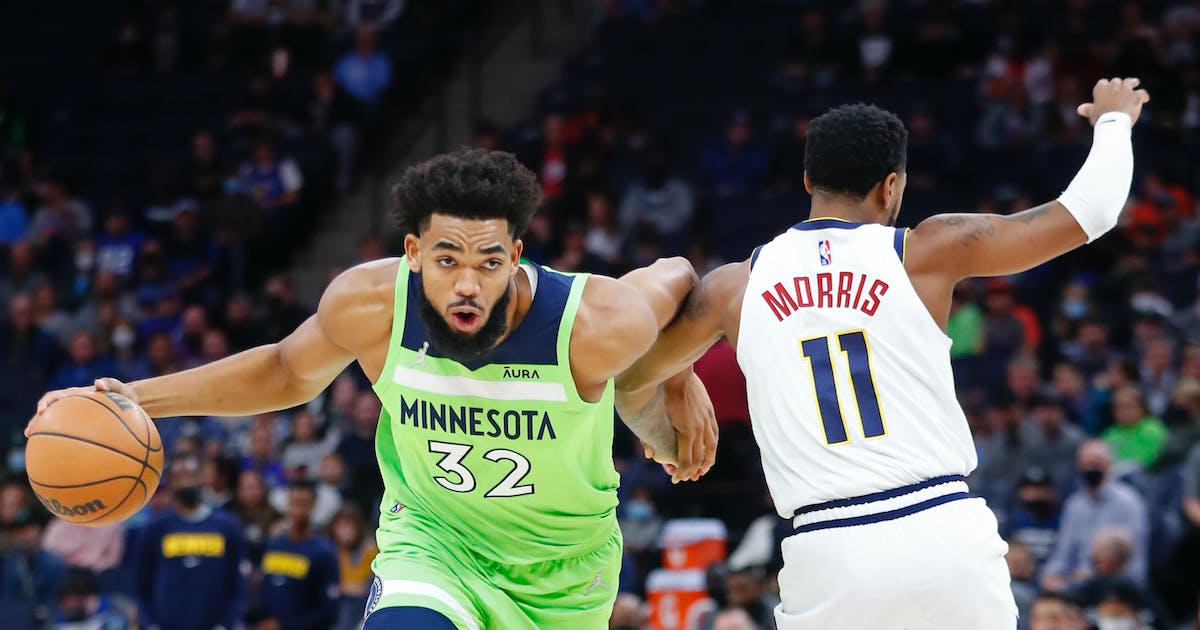 Timberwolves coach Chris Finch was an assistant in Denver when the Nuggets were coalescing from a young team with talent into a playoff team. So, before Minnesota played host to Denver on Saturday night at Target Center, Finch was asked what he took away from his time in Denver.

“That they were going to be really good,” Finch said. “I’ve said it many times, I got a lot of similar feelings when I came here with the young core as when I was there. It took a couple seasons for it to fall together, and now they’re a playoff lock. And, hopefully, we can follow that same path.”

Upseven early in the fourth quarter — the result of a 13-0 run from late third into the early fourth — the Wolves just couldn’t hold on in a 93-91 loss to Denver.

Minnesota was outscored 9-4 the rest of the way. Give most of the credit to reigning league MVP Nikola Jokic, who scored 26 points with 19 rebounds and seven assists. His two free throws with 1:21 left put the Nuggets up 93-91. Anthony Edwards scored with 31.1 seconds left. At the other end Karl-Anthony Towns forced a Jokic turnover, but the Wolves couldn’t score at the other end as time expired.

Minneosta was led by Malik Beasley’s 18 points off the bench. Towns, Edwards and D’Angelo Russell all scored 14.

Three of the first four Timberwolves possessions in the first quarter went like this: Towns driving for a dunk. Towns hitting a three. Towns getting fouled and making both free throws as Minnesota opened the game 9-4.

The rest of the quarter was back and forth. A 6-0 run gave the Nuggets their first lead. The two teams traded baskets. Naz Reed led all Wolves scorers with five points in a 16-6 end to the quarter that turned a one-point deficit into a 32-23 lead entering the second. But, in the battle of talented big men, Towns had nine points, two rebounds and two assists while Jokic had zero points.

After scoring the last five points of the first quarter, the Wolves opened the second on a 5-0 run, building a 37-23 lead on two free throws by Josh Okogie less than two minutes into the quarter.

But the rest of the quarter belonged to Jokic and the Nuggets.

With Jokic scoring five points, Denver ended the half on an 11-2 run, slicing that 13-point lead to just 47-43. The Nuggets out-scored the Wolves 20-15 in the second quarter, holding Minnesota to 6-for-21 shooting and eight turnovers.

Jokic? After being out-scored 9-0 by Towns in the first quarter, he out-scored KAT 10-0 in the second and was three rebounds away from a double-double by the time the half ended.

With both teams struggling to make shots, the back-and-forth third saw the Nuggets tie the score three times before Jokic’s three-pointer from the top of the key put the Nuggets up 67-64 with 2:44 left in the quarter.

Note: Leandro Bolmaro was recalled from the Wolves’ G League team for Saturday’s game. Finch said the depth of the team could mean Bolmaro would be making the trip down to the G League often in the coming weeks.