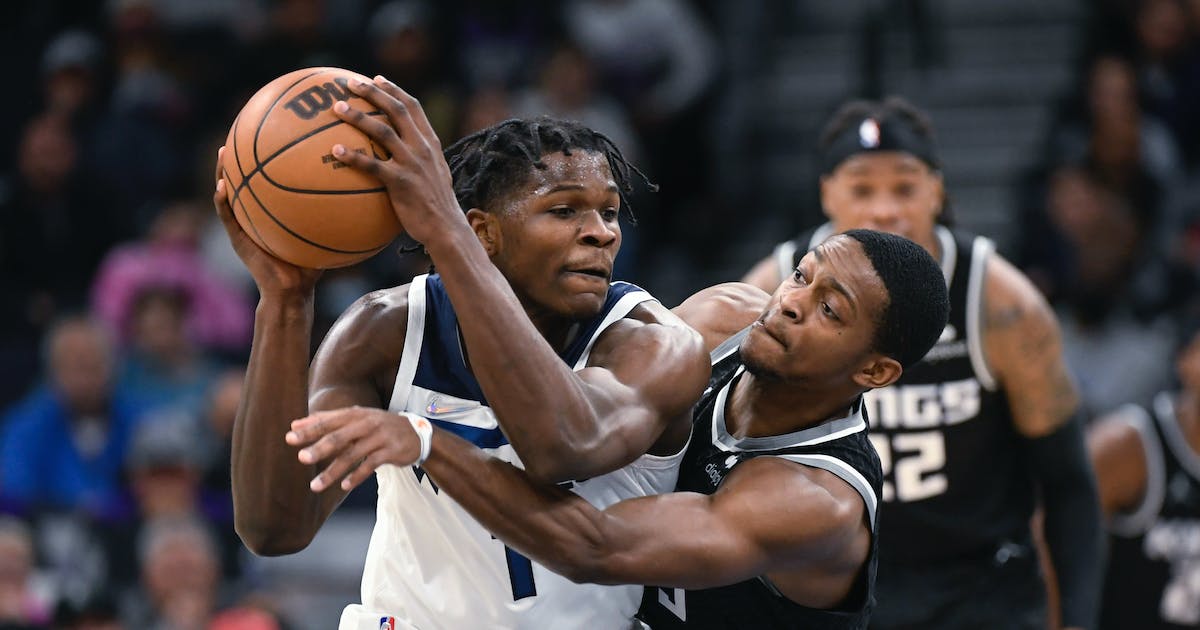 At halftime of the Timberwolves’ 107-97 victory over the Kings, the Wolves were shooting 39% and a dreadful 11% from three-point range.

That wasn’t the most pressing matter to coach Chris Finch, who opted not to show any film of the offense. Instead, he showed some clips of the Wolves’ “inexcusable” rebounding.

They weren’t going to win if they allowed Sacramento to have more offensive rebounds (13) than the Wolves had defensive boards (12) in the first half.

“If you want to win the game, you’re going to rebound,” Finch said of his message at halftime. “It’s going to come down to that.”

Only Finch let them know that in an animated way, according to Anthony Edwards.

Finch was calmer by the end of the night.

They outrebounded Sacramento in the second half 18-17 and Edwards found his shooting touch in the fourth quarter. The Wolves came to life first in a game that started as a brick-laying contest, but it was an ugly contest the Wolves needed to find a way to win against a team near them in the standings.

They shot 63% in the second half while Edwards had 16 of his 26 points in the fourth to help the Wolves throw a few more rocks in the water than the Kings did. Finch said everything got better once the rebounding improved.

“Mostly it was rebounding,” Finch said. “We rebounded better in the second half and we were able to get out in the flow of our offense a little better.”

Edwards helped with that in the fourth quarter as he hit four of six three-pointers to put the Wolves ahead for good. They never trailed in the fourth.

“What I do in the first and third quarter, it don’t even matter to me,” Edwards said. “In the fourth quarter, I feel like I’ve got a switch that turns on and I feel like I’m trying to make every shot that I take, so that’s pretty much what happened.”

Karl-Anthony Towns took his star turn in the third quarter by hitting his first three shots and scoring nine of his 22 points to get the Wolves out of their first-half funk.

Then in the fourth, Towns said the Wolves did a better job of helping set up Edwards for success.

“We put ‘Ant’ in spots where he could succeed,” Towns said. “We gave him some matchups that were favorable for him. I thought he did a great job making it work.”

Like when Edwards took Sacramento’s Chimezie Metu off the dribble and faked him out for an easy layup to make the score 89-85 with 6 minutes, 25 seconds remaining.

The challenge for the Wolves now is to follow up a win with another one, something that has been a challenge for this nucleus of players since the beginning of last season. They followed up a victory over the Lakers on Friday with a blowout loss against the Clippers on Saturday.

Edwards said Patrick Beverley passed along some advice to the team in advance of Thursday’s game against San Antonio — that it should handle this back-to-back set of games differently.

“Pat said whatever y’all did on the back-to-back in L.A., don’t do that tonight,” Edwards said. “Stay in the house, get on the game. Call a couple teammates, let’s play ‘Call of Duty’ ’til you get sleepy. You get sleepy, go to sleep.”

They will at least sleep a little more peacefully.