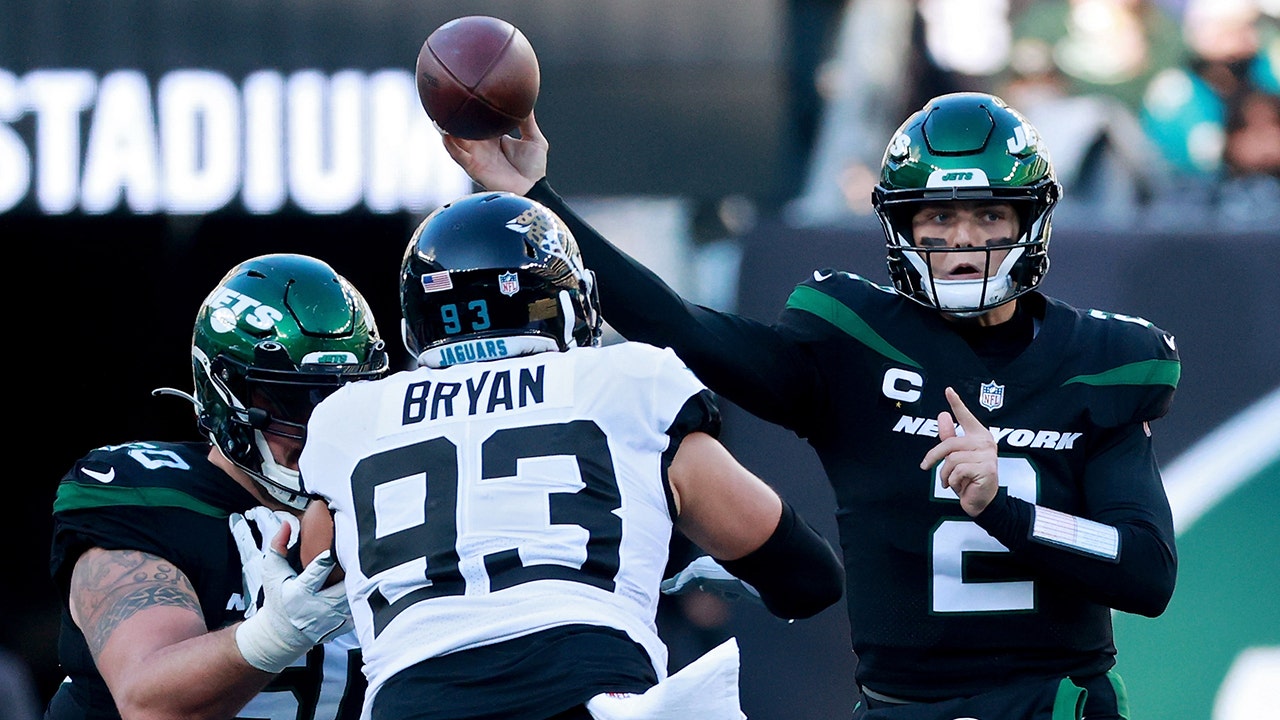 Zach Wilson threw a touchdown pass and ran for another to outduel Trevor Lawrence, and the short-handed New York Jets used a goal-line stand at the end of the game to hold on and beat the Jacksonville Jaguars 26-21 on Sunday.

It was the fourth matchup of rookie quarterbacks taken with the first two picks in the draft — and the No. 2 selection came out on top.

A 26-yard run by the No. 1 pick got the ball to the 5, and he followed with a 4-yard pass to Marvin Jones. Lawrence spiked the ball to stop the clock to make it fourth-and-the-game.

But Lawrence’s pass to Jones fell incomplete — and the Jaguars were called for an illegal shift that the Jets declined, turning the ball over on downs. The Jets had 20 players on the COVID-19 list and played without coach Robert Saleh because he didn’t clear protocols after testing positive earlier in the week.

Wilson set a Jets record for a quarterback with 91 yards rushing, highlighted by a 52-yard score — the longest run by a QB in franchise history. He was 14 of 22 for 102 yards passing, including a TD pass to offensive lineman Conor McDermott.

Braxton Berrios returned a kickoff 102 yards for a touchdown, and Michael Carter ran for 118 yards on 16 carries for New York, which was led by tight ends coach Ron Middleton in Saleh’s absence.

The silver lining for the Jaguars in defeat: They created some space between themselves and the Jets for next year’s No. 1 draft pick.

Lawrence, the top selection in April, was 26 of 39 for 280 yards for the Jaguars, who lost top running back James Robinson to a torn Achilles tendon early in the game.

With the Jets leading 16-15 in the fourth quarter, Wilson marched New York down the field with a run-heavy drive to get to the 1 after a 2-yard catch by Carter.

On fourth down, New York went for it — and Wilson found McDermott, who was a tackle eligible on the play, for a touchdown to put the Jets up 23-15 with 9:16 left. McDermott reached up and leaped — looking very much like a tight end — to come down with the ball. His teammates jumped on top of him in the end zone in celebration.

Dare Ogunbowale, in for the injured Robinson, answered with a 1-yard touchdown run with 5:25 remaining. But Lawrence’s throw on a tying 2-point try fell incomplete.

After Matthew Wright’s 21-yard field goal put Jacksonville up 3-0, Wilson put the Jets ahead with his record-setting run late in the first quarter. He rolled to his right to escape a sack, zipped down the right sideline, and stayed inbounds while doing a tightrope walk around the Jaguars 25 before finishing with a dive into the end zone.

Pineiro, in his third game with the Jets after two other kickers struggled, had his extra-point try blocked by Adam Gotsis.

Lawrence marched the Jaguars right back down the field, finding Laqon Treadwell for 20 yards on fourth-and-1 from the Jets 39. Four plays later, Lawrence ran a keeper from the 3, but had the ball knocked out of his hands by Jason Pinnock. Offensive lineman Will Richardson recovered in the end zone for a touchdown, putting Jacksonville back ahead.

The Jaguars went for 2 after a penalty by the Jets on the extra point, but Ogubowale’s run was stopped, making it 9-6.

The drive was costly for the Jaguars, though, as Robinson left with a non-contact injury on Lawrence’s handoff to Tavon Austin. After being examined in the medical tent, Robinson had a towel draped over his head as he was carted to the locker room and ruled out for the rest of the game. Robinson finished with 10 yards on three carries.

Berrios fielded the ensuing kickoff in the end zone and ran it all the way back, giving the Jets the lead again at 13-9. It was New York’s first kickoff return for a touchdown since Andre Roberts against Green Bay in 2018.

Jaguars: Other than Robinson, LB Dakota Allen left with a shoulder injury in the second quarter. … DE/OLB K’Lavon Chaisson injured an ankle in the fourth quarter.

Jaguars: Travel to New England, where they are 0-8, to face the Patriots next Sunday.