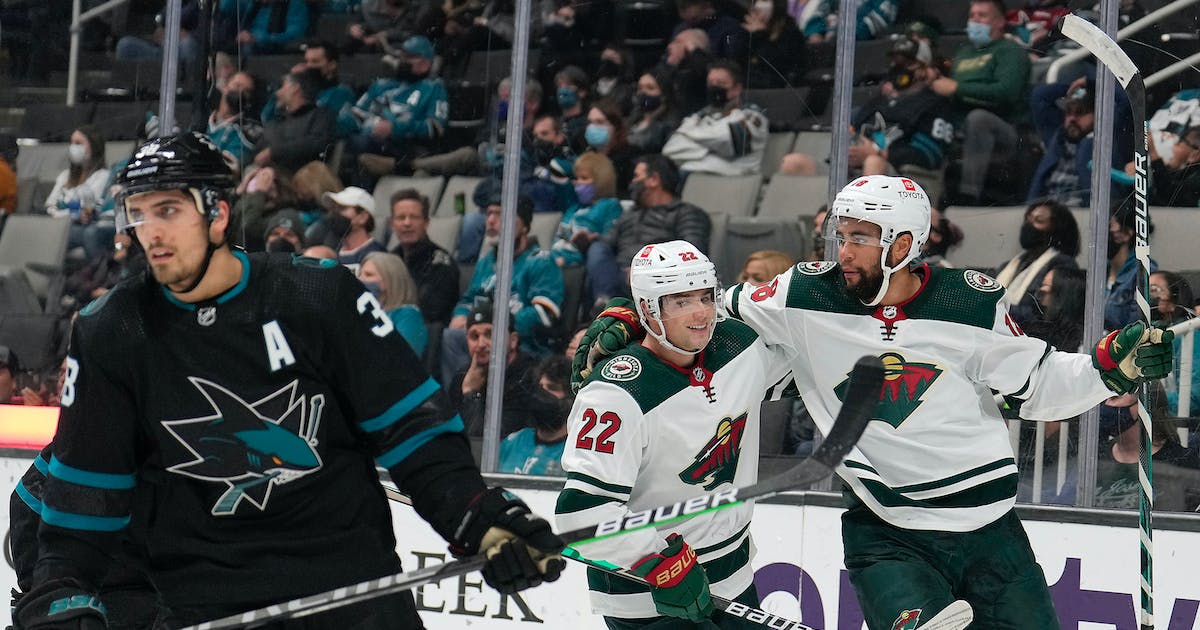 SAN JOSE, Calif. – The Wild could be bounced from the perch in a matter of hours, a reminder that the NHL leaderboard can be a game of musical chairs at any point of the season.

But even if the Wild’s relocation was only temporary, that doesn’t change the fact the Wild moved into first place in the first place.

One minute before Thursday turned into Friday back in Minnesota, the Wild seized the top spot in the NHL for the first time since Dec.18, 2011, after stymieing the Sharks 5-2 in front of 10,782 at SAP Center in its eighth straight victory.

“That’s what we signed up for,” Jordan Greenway said. “We want to be the top team. We want to stay on top. In order for us to do that, we have to continue to do the things that got us here.”

One streak, however, did come to a halt, and it was Kevin Fiala’s goalless skid.

The winger snapped out of a seven-game rut, opening the scoring and later setting up the game-winner from Greenway, who tallied two goals for the first multi-goal game of his career.

Talbot received an early lead to work with, as Fiala jumped on a rebound 6 minutes, 22 seconds into the first period to score his fourth goal of the season and 95th of his career.

In between his previous goal on Nov.21 at Tampa Bay and this one against San Jose, Fiala had an eye-popping 30 shots stopped out of 46 total shot attempts.

Although the Sharks upped the pressure after falling behind, the Wild withstood the push the rest of the period and through the second.

That period has given the Wild trouble of late, but the team flipped the script by adding to its advantage.

Mats Zuccarello found Joel Eriksson Ek in the slot for a redirection on the power play at 7:04.

This was the first time in Eriksson Ek’s career he’s capitalized on the power play in back-to-back games. His six power play goals overall are tied for third in the NHL, and Eriksson Ek has six points during a three-game point streak after assisting on one of Greenway’s goals. He also has multi-point efforts in three straight games, another first.

Then, with 4:40 left in the second, the Wild tacked on another goal – this one a shot off the rush by Greenway, the first time in his career he’s scored on the power play. All four of his goals this season have come in the past five games, with the winger tallying six points in that span.

“I haven’t been on the power play a ton, so it’s good the coaches trust me to go be out,” Greenway said.

Fiala and Alex Goligoski had the helpers on the goal, with Goligoski chipping in after he took a Brent Burns shot to the face and left the game briefly. Sharks goalie Adin Hill ended up with 22 saves.

The Wild has a power play goal in a season-best three straight games; those two contributions during three chances were timely contributions because instead of regressing in the second, the Wild sagged in the third.

Just 3:29 into the period, the Sharks spoiled Talbot’s shutout bid when Jonathan Dahlen tipped in a shot from Erik Karlsson.

That finish only seemed to ignite San Jose even more, and the Wild had to be attentive. After all, the Sharks were one of only two teams to hand the Wild a regulation loss over its last 13 games.

They remained a challenge the rest of the way, with Tomas Hertl burying a rebound with 6:34 remaining to cut San Jose’s deficit to 1 on its lone power play goal in three tries.

Not until Greenway dumped the puck into an empty net at 18:12 while fending off Burns did the Wild stall the Sharks. Kirill Kaprizov racked up another empty-net goal 32 seconds later, his 10th goal of the season. He also picked up an assist on Eriksson Ek’s goal, and his seven-game point streak is the longest of his NHL career.

But that isn’t the only impressive streak in the NHL right now.

“We’re happy that the guys keep doing the right things,” coach Dean Evason said. “You could go the other way sometimes, and we’re not. We’re staying the course.”