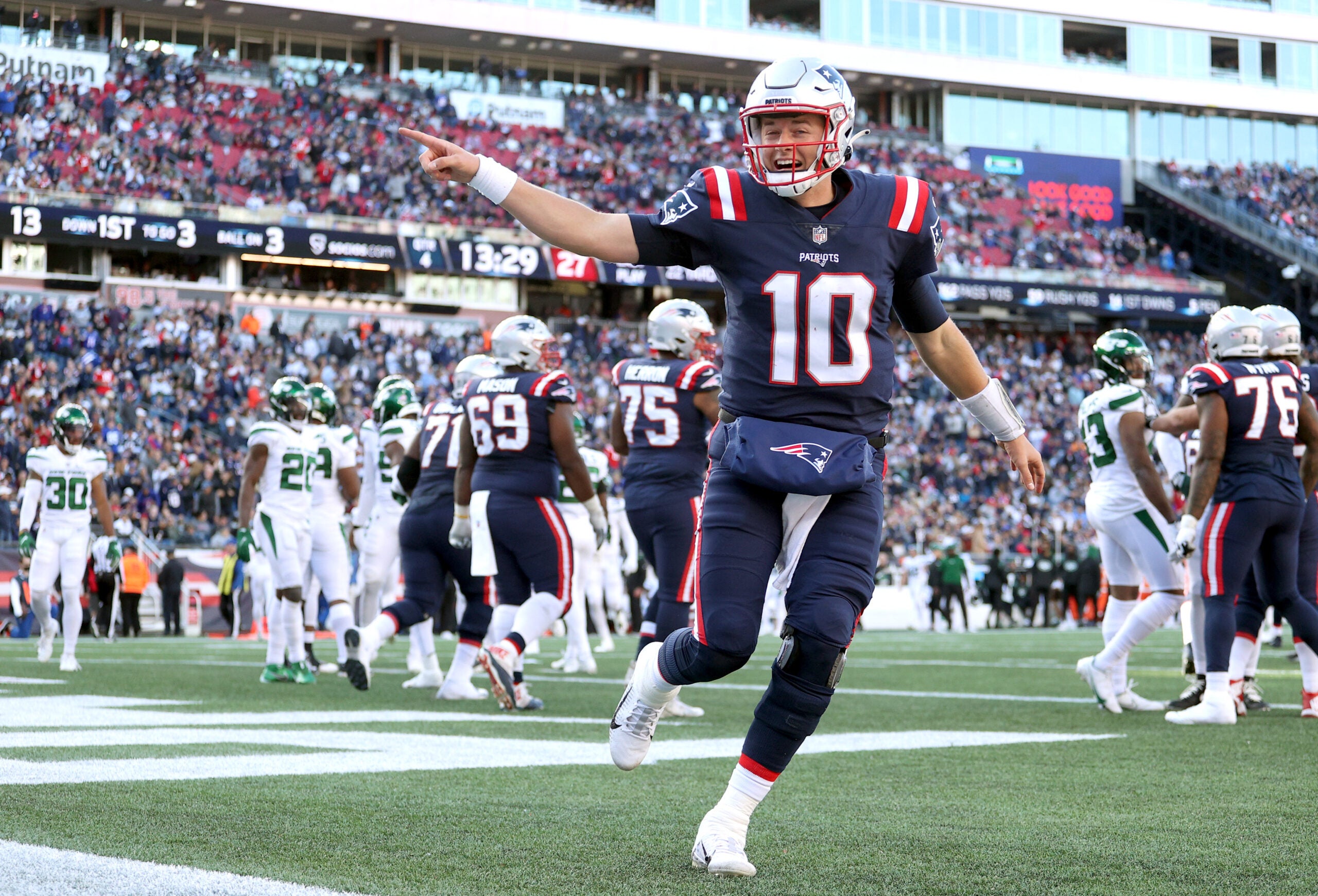 Two of the best quarterbacks to come out of the previous two NFL Drafts go head-to-head in Los Angeles on Sunday.

Last season’s Offensive Rookie of the Year Justin Herbert and the Chargers welcome rookie Mac Jones and the Patriots to SoFi Stadium.

Jones hasn’t been as stellar as Herbert was in his rookie campaign, but he’s been impressive. He’s thrown 1,779 yards this season (13th in the league for passing yards per game), with nine touchdowns, and six interceptions. Jones’s 70.4 completion percentage is the fourth-best in the league.

With the solid play to start his career, Jones has earned praise among NFL experts, who have ranked him among some of the league’s best young quarterbacks.

In an article for ESPN, Pro Football Focus’s Seth Galina ranks Jones as the sixth-best quarterback under the age of 25, behind Lamar Jackson, Herbert, Kyler Murray, Joe Burrow, and Daniel Jones, respectively.

In the ranking, which has Jones above all of the other quarterbacks from his draft class, Galina wrote on how Jones has gotten better in recent weeks.

“Jones has done an excellent job leading the Patriots’ offense in his first year as the starter,” Galina wrote. “He is 25th in average depth of target, so he is not firing difficult downfield shots often. However, Jones has been accurate. His completion rate (70.5%) is the fourth-best in the league. After not hitting a pass beyond 20 yards in Weeks 4 and 5, he has cranked it up in his past two starts — throwing five deep completions for 190 yards and two scores. That bodes well for the Patriots going forward.”

The other three deep completions were to Hunter Henry (20 yards for a touchdown), Nelson Agholor (27 yards), and Rhamondre Stevenson (22 yards), with all three coming against the Cowboys. Jones has actually developed a rapport with Herbert’s old teammate, Henry, in recent weeks as the tight end’s scored a touchdown in each of the last four games.

Former Patriots quarterback Matt Cassel also likes what he’s seen from Jones. In an article for NBC Sports Boston, Cassel ranked Jones as the sixth-best quarterback of all the quarterbacks drafted since 2018. The only different player in front of Jones in that group is Josh Allen, whom the Bills selected in the first round of the 2018 draft.

“I’d take Jones ahead of Baker Mayfield right now, specifically from a system fit perspective,” Cassel wrote. “He’s the perfect fit for New England. He’s got a great coaching staff around him that knows how to bring the best out of individual players. I can use myself as an example: I hadn’t started a game since high school, and we went 11-5 in 2008.

“Mac continues to get better. He’s smart and processes the game well, but he also has the accuracy, the anticipation and the leadership. Sometimes leadership gets overlooked when you’re evaluating talent, but it has to come into play, because how those guys respond to you matters.

“This is a rookie who’s not playing like a rookie. He’s calm, he’s collected, and he’s playing at a really high level.”