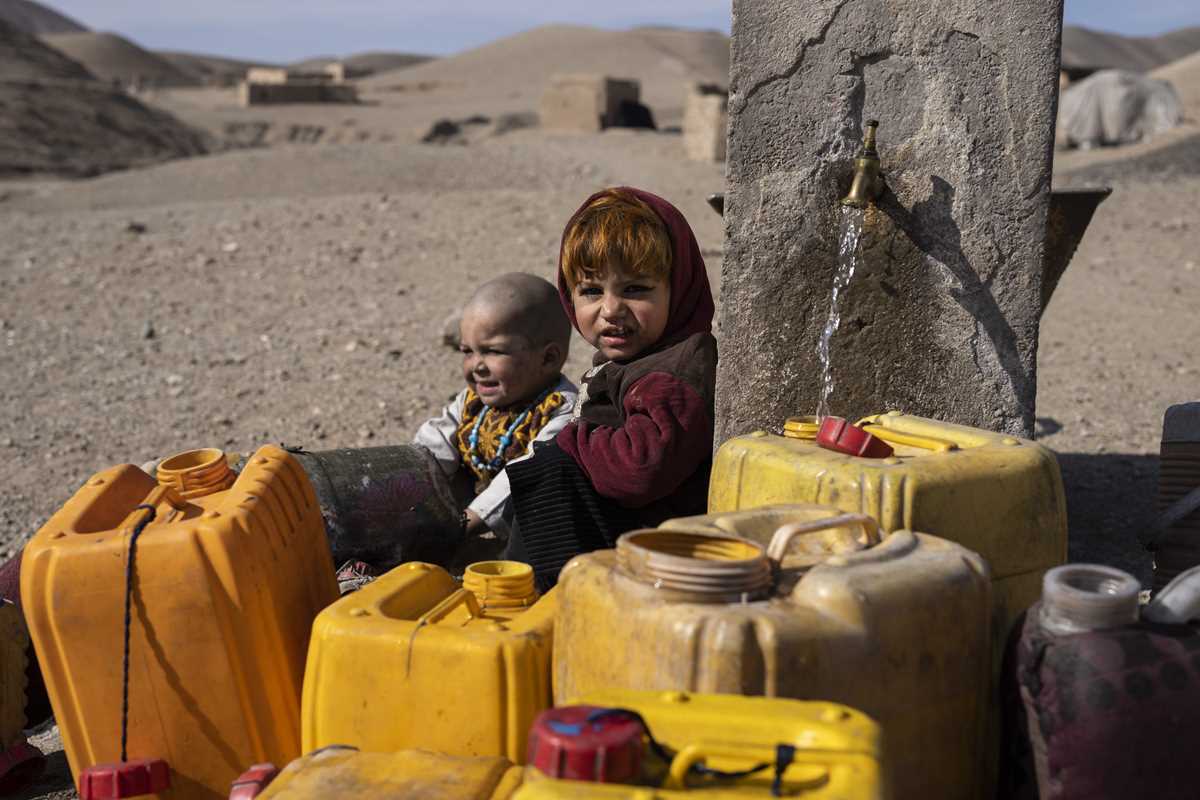 Two Afghan children sit next to a spigot as people of Kamar Kalagh village outside Herat, Afghanistan, try to fill their plastic containers with water, on Friday, Nov. 26, 2021. Afghanistan’s drought, its worst in decades, is now entering its second year, exacerbated by climate change. (AP Photo/Petros Giannakouris)

UNITED NATIONS (AP) — The U.N. humanitarian chief warned that Afghanistan’s economic collapse “is happening before our eyes” and urged the international community to take action to stop “the freefall” before it leads to more deaths.

Martin Griffiths said in an interview with The Associated Press on Thursday that donor nations need to agree that in addition to emergency humanitarian aid they need to support basic services for the Afghan people including education, hospitals, electricity and paying civil servants — and they must inject liquidity into the economy which has seen the banking system “”pretty well shut down.”

“We’re seeing the economic collapse being exponential,” he said. “It’s getting more and more dire by the week.”

Griffiths said the liquidity issue must be settled by the end of the year and money must be funneled to front-line service workers during the winter, adding that he had to revise his earlier view that Afghanistan could get through the winter on pure humanitarian assistance because of the worsening economic situation.

As one example, he said, 4 million children are out of school and 9 million more will be soon and the reason is simple — 70% of teachers haven’t been paid since August. “And if we don’t make that happen, all that discussion about the right of women and girls going to school becomes academic,” he said.

“So, my message today is a wake-up call about the humanitarian consequences of an economic collapse and the need to take urgent action,” Griffiths said.

The Taliban overran most of Afghanistan as U.S. and NATO forces were in the final stages of their chaotic withdrawal from the country after 20 years. Taliban forces entered Kabul on Aug. 15 without any resistance from the Afghan army or the country’s president, Ashraf Ghani, who fled. The Taliban initially promised tolerance and inclusiveness toward women and ethnic minorities but their actions so far, including renewed restrictions on women and the appointment of an all-male government, have been met with dismay by the international community.

Knightscope, Inc., a developer of advanced physical security technologies focused on enhancing U.S. security operations, has commenced its offering of up to $40 million of Class A common stock, with shares to be listed immediately following closing on NASDAQ under the ticker symbol “KSCP.”

Afghanistan’s aid-reliant economy was also thrown into deep turmoil following the Taliban takeover. The Afghanistan central bank’s $9 billion in reserves, most of which is held in the United States, were frozen and the International Monetary Fund blocked about $450 million because of a “lack of clarity” about a new government.

The Taliban leadership has banned all foreign currency transactions and urged the U.S. to ease sanctions and release Afghanistan’s overseas assets in order for the government to be able to pay teachers, doctors and other public sector employees.

Griffiths said the U.N. is asking the U.S. and other donors for money, which he insisted will not go to the Taliban but through U.N. channels to get directly to the people who need it — teachers, doctors, electricity providers and other civil servants.

Griffiths said the consequences of Afghanistan’s collapsing economy are becoming more apparent — reports of hospitals without electricity, severe malnutrition and three or four children in one hospital bed, and tens of thousands of unpaid doctors, teachers and civil servants struggling to survive.

He recalled that the United States always supported the provision of electricity in Afghanistan, but 80% of electricity sources are “now at the brink of stoppage, and without electricity you have automatic consequences.”

Griffiths said the World Bank, the United Nations and the U.S. government are making “an enormous effort” to address the liquidity crisis. He said he will head to Washington on Dec. 21 to meet with U.S. Secretary of State Antony Blinken to discuss Afghanistan’s collapsing economy.

“By the end of the year, I’d like to see the beginnings of liquidity receding as a problem,” he said.

Griffiths said the U.N. would like to see $700 million come through by Jan. 31 which would be earmarked for services to help the Afghan people.

He said the World Bank reprogrammed $280 million for Afghanistan into humanitarian assistance which was “really good.”

Griffiths said the U.S. Treasury also needs to provide letters for traders in Afghanistan saying they are not breaking sanctions. The U.S. has carved out humanitarian exemptions from sanctions, and he said the U.N. Security Council has to do the same.

Griffiths warned that if critical services aren’t provided to the Afghan people “we know what’s going to happen.”

7 Trucking Stocks That Are About to Go On a Roll

Americans are facing a historic supply chain crisis. The solutions are simple on the one hand and
maddeningly complex on the other. And no industry embodies that complexity more than the trucking
industry. Just getting the barges unloaded will not be enough. Those goods have to be transported to a
final destination.

For that, we’re going to need trucks. And those trucks will need drivers. According to the American
Trucking Association (ATA), approximately 70% of consumer goods in the United States are transported
by trucks. However, for a variety of reasons, the industry faces a shortage of qualified drivers.

How extreme is that shortage? The ATA estimates that the shortage of qualified truck drivers sits at over
50,000 and continues to grow. In fact, it suggests that over 900,000 drivers are needed and there simply
are not enough qualified drivers to meet that demand.

We’re not going to see one million new drivers on the road by the end of the year. And even if we did,
trucking companies will be a beneficiary as the industry rises to meet this moment. This also means that
investors should be eyeing trucking stocks. And that’s why we’ve prepared this special presentation
which identifies seven trucking stocks that are excellent opportunities at this time.

View the “7 Trucking Stocks That Are About to Go On a Roll”.