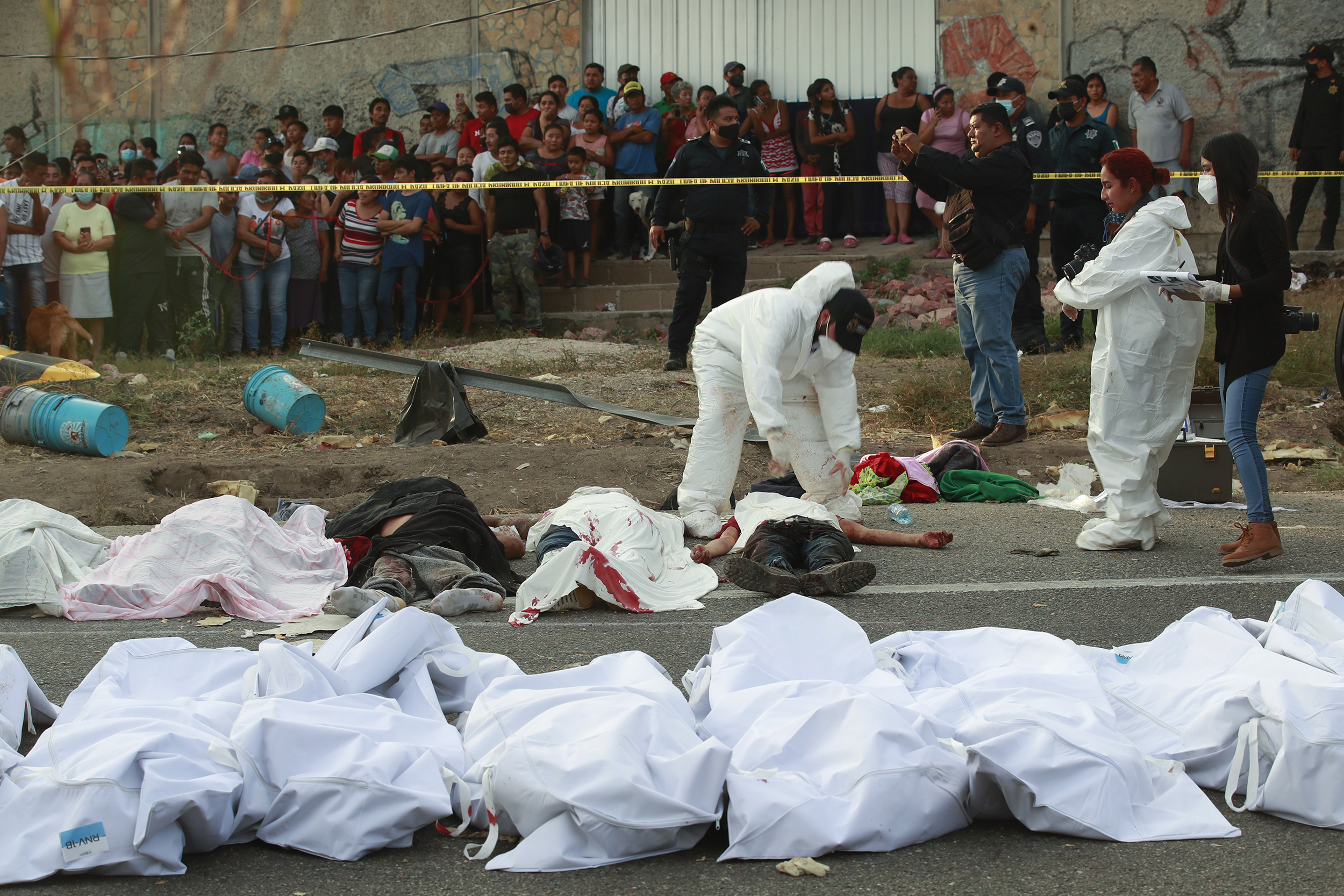 TUXTLA GUTIERREZ, Mexico — A cargo truck jammed with people who appeared to be Central American migrants rolled over and crashed into a pedestrian bridge over a highway in southern Mexico on Thursday, killing at least 53 people and injuring dozens more, authorities reported.

By late Thursday, the death toll stood at 53, and authorities said at least 54 people had been injured. It was one of the worst single-day death tolls for migrants in Mexico since the 2010 massacre of 72 migrants by the Zetas drug cartel in the northern state of Tamaulipas.

Luis Manuel Moreno, the head of the Chiapas state civil defense office, said about 21 of the injured had serious wounds and were taken to local hospitals.

The federal Attorney General’s Office said three were critically injured in the crash on a highway leading from the Guatemalan border toward the Chiapas state capital.

Photos from the scene showed victims strewn across the pavement and inside the truck’s freight compartment.

Video footage showed the dead and injured migrants jumbled into a pile inside the collapsed freight container, with some struggling to extract themselves from the weight of bodies piled atop them.

Later, rescue workers arranged the dead in rows of white sheets, side by side, on the asphalt.

The victims appeared to be immigrants from Central America, though their nationalities had not yet been confirmed. Moreno reported that some of the survivors said they were from the neighboring country of Guatemala.

Sitting on the pavement beside the overturned trailer, survivor Celso Pacheco of Guatemala said the truck felt like it was speeding and then seemed to lose control under the weight of the migrants inside.

Pacheco said there were migrants from Guatemala and Honduras aboard and estimated there were eight to 10 young children. He said he was trying to reach the United States, but now he expected to be deported to Guatemala.

Rescue workers tried to excavate survivors from a pile of humanity in the flipped trailer, separating the injured from the dead. Dazed wounded stumbled among the wreckage.

Marco Antonio Sánchez, director of the Chiapas Firefighter Institute, said ambulances raced victims to three hospitals, carrying three to four injured each. When there weren’t enough ambulances they loaded them into pickup trucks, he said.

Guatemalan President Alejandro Giammattei wrote on Twitter: “I deeply regret the tragedy in Chiapas state, and I express my solidarity for the victims’ families, to whom we will offer all the necessary consular assistance, including repatriation.”

Moreno said that it appeared that speed and the weight of the truck’s human cargo may have caused it to tip over, and that as the vehicle toppled over it hit the base of a steel pedestrian bridge. There was a curve in the road near the accident scene that may have contributed to the crash.

That meant at least 107 people were crowed into the vehicle. It is not unusual for freight trucks in Mexico to be carrying so many people in migrant-smuggling operations in southern Mexico.

The truck had originally been a closed freight module of the kind used to transport perishable goods. The container was smashed open by the force of the impact. It was unclear if the driver survived.

Those who spoke to survivors said the migrants told of boarding the truck in Mexico, near the border with Guatemala, and of paying between $2,500 and $3,500 to be transported to Mexico’s central state of Puebla. Once there, they would presumably have contracted with another set of migrant smugglers to take them to the U.S. border.

In recent months, Mexican authorities have tried to block migrants from walking in large groups toward the U.S. border, but the clandestine and illicit flow of migrant smuggling has continued.

In October, in one of the largest busts in recent memory, authorities in the northern border state of Tamaulipas found 652 mainly Central American migrants jammed into a convoy of six freight trucks heading toward the U.S. border.

Irineo Mujica, an activist who is leading a march of a couple of hundred migrants who have been walking for almost 1 1/2 months across southern Mexico, blamed Mexico’s policies of cracking down on migrant caravans for the disaster.

Mujica and his group had almost reached the outskirts of Mexico City on Thursday, after weeks of dealing with National Guard officers who tried to block the march. Mujica said the group would stop Thursday and offer prayers for the dead migrants.

“These policies that kill us, that murder us, is what leads to this type of tragedy,” Mujica said.

In fact, they are two very different groups. Caravans generally attract migrants who don’t have the thousands of dollars needed to pay migrant smugglers.

Migrants involved in serious accidents are often allowed to stay in Mexico at least temporarily because they are considered witnesses to and victims of a crime, and later Thursday Mexico’s National Immigration Institute said it would offer humanitarian visas to the survivors.

The agency also said the Mexican government would help identify the dead and cover funeral costs or repatriation of their remains.

Mass deaths of migrants are something that President Andrés Manuel López Obrador has been desperate to avoid, even as his administration has accepted requests from the U.S. government to stem the flow of migrants moving north. “It is very painful,” he wrote on his Twitter account.

It was one of the worst single-day death tolls for migrants in Mexico since the 2010 massacre of 72 migrants by the Zetas drug cartel in the northern state of Tamaulipas.