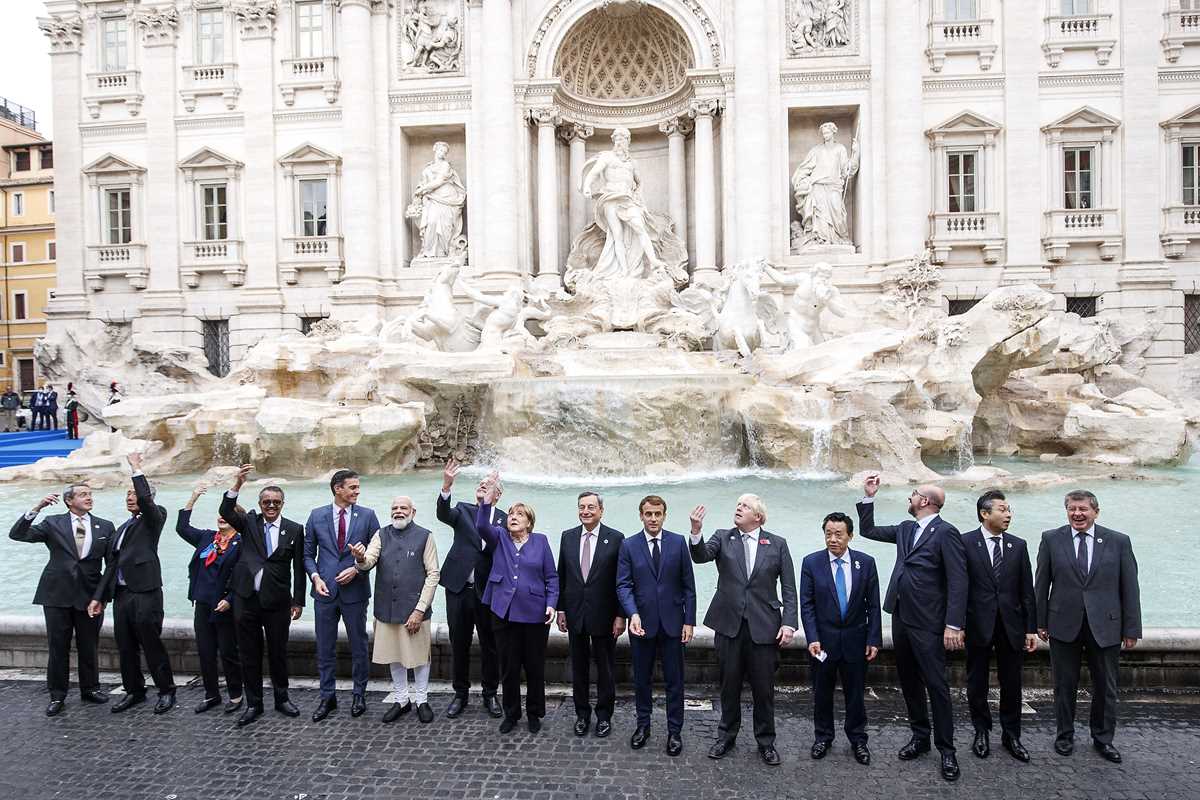 Leaders of the G20 throw coins inside the Trevi Fountain during an event for the G20 summit in Rome, Sunday, Oct. 31, 2021. The two-day Group of 20 summit concludes on Sunday, the first in-person gathering of leaders of the world’s biggest economies since the COVID-19 pandemic started. (Roberto Monaldo/LaPresse via AP) 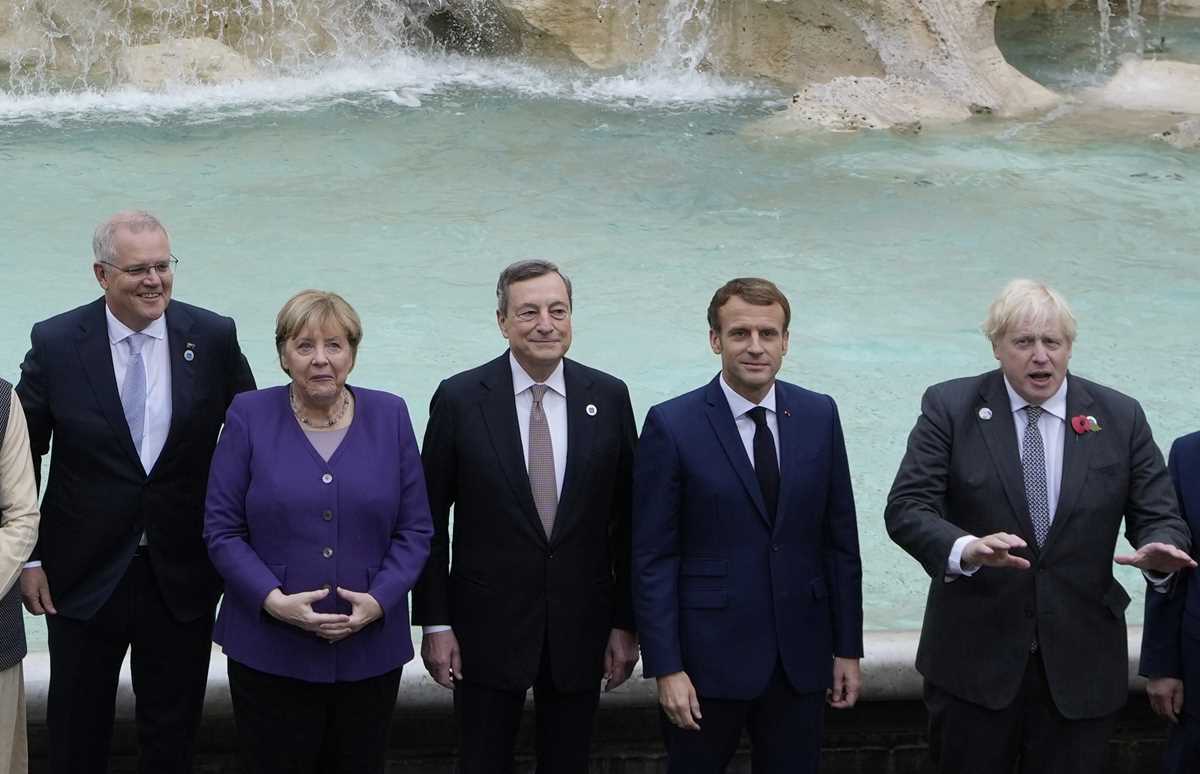 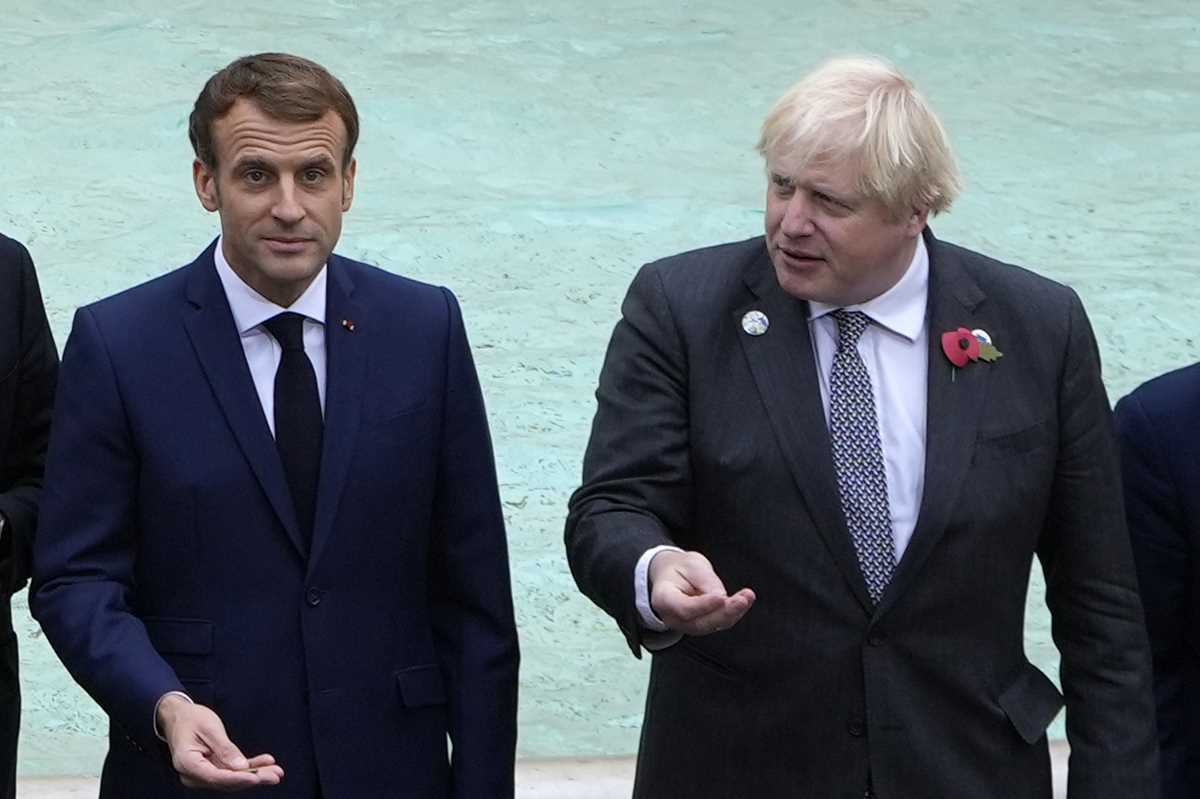 French President Emmanuel Macron, left, and British Prime Minister Boris Johnson prepare to throw a coin in the water at the Trevi Fountain during an event for the G20 summit in Rome, Sunday, Oct. 31, 2021. The two-day Group of 20 summit concludes on Sunday, the first in-person gathering of leaders of the world’s biggest economies since the COVID-19 pandemic started. (AP Photo/Gregorio Borgia) 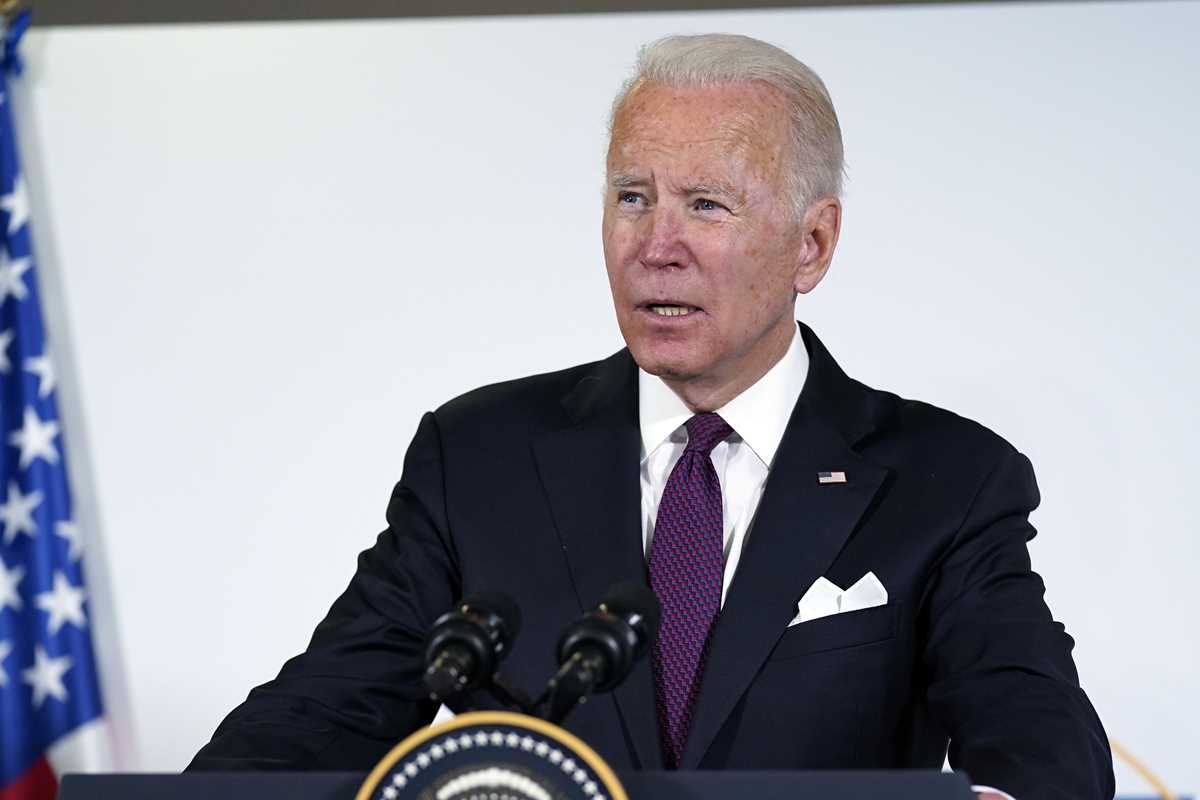 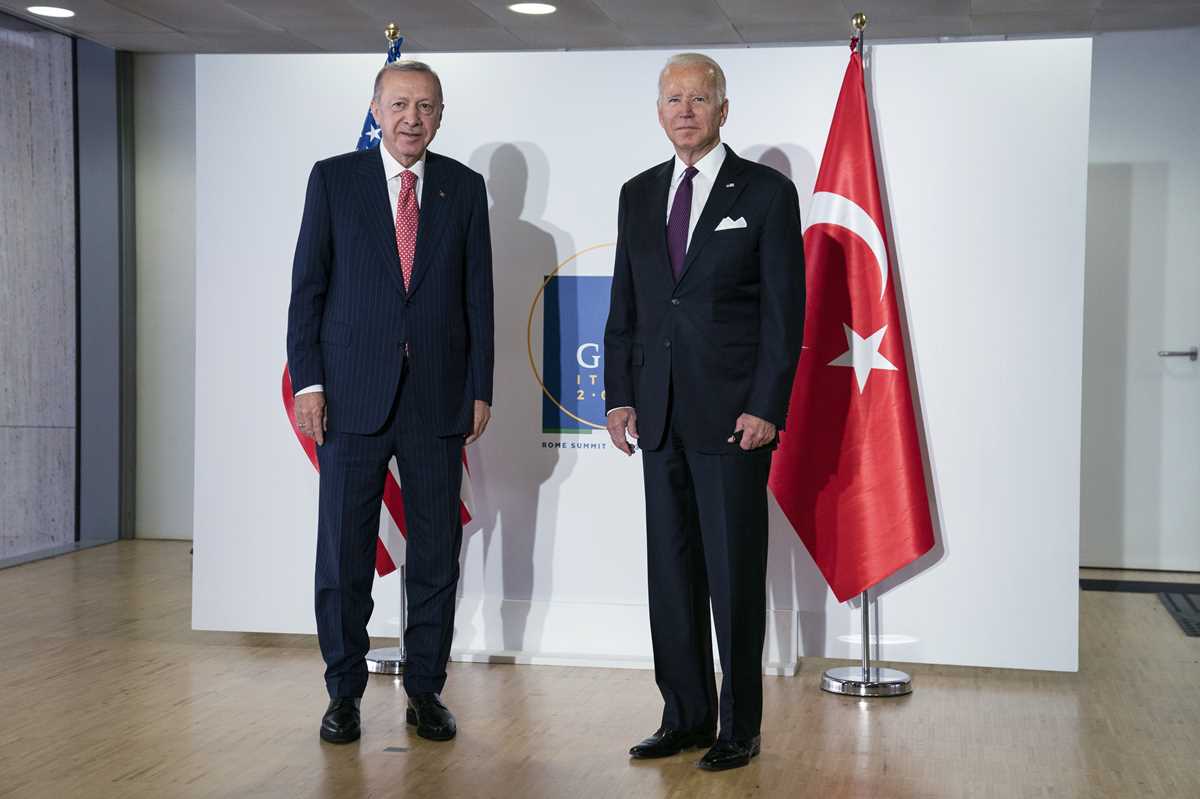 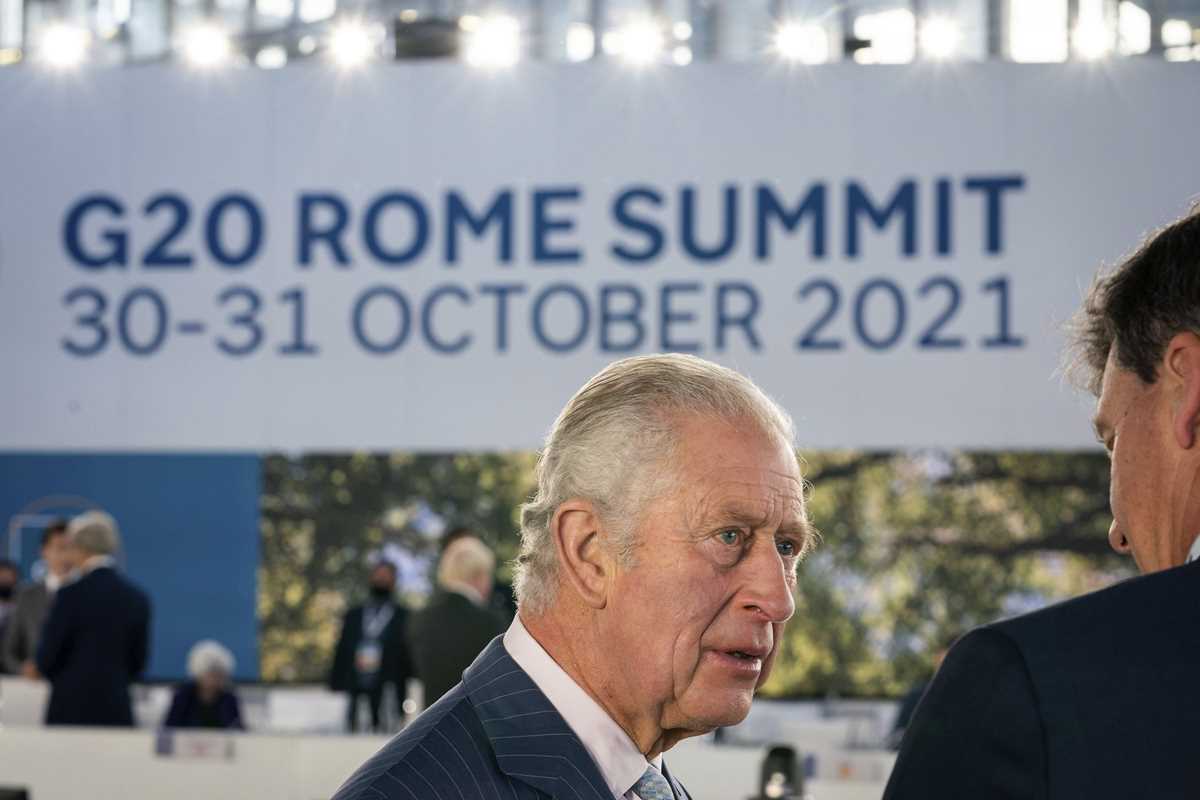 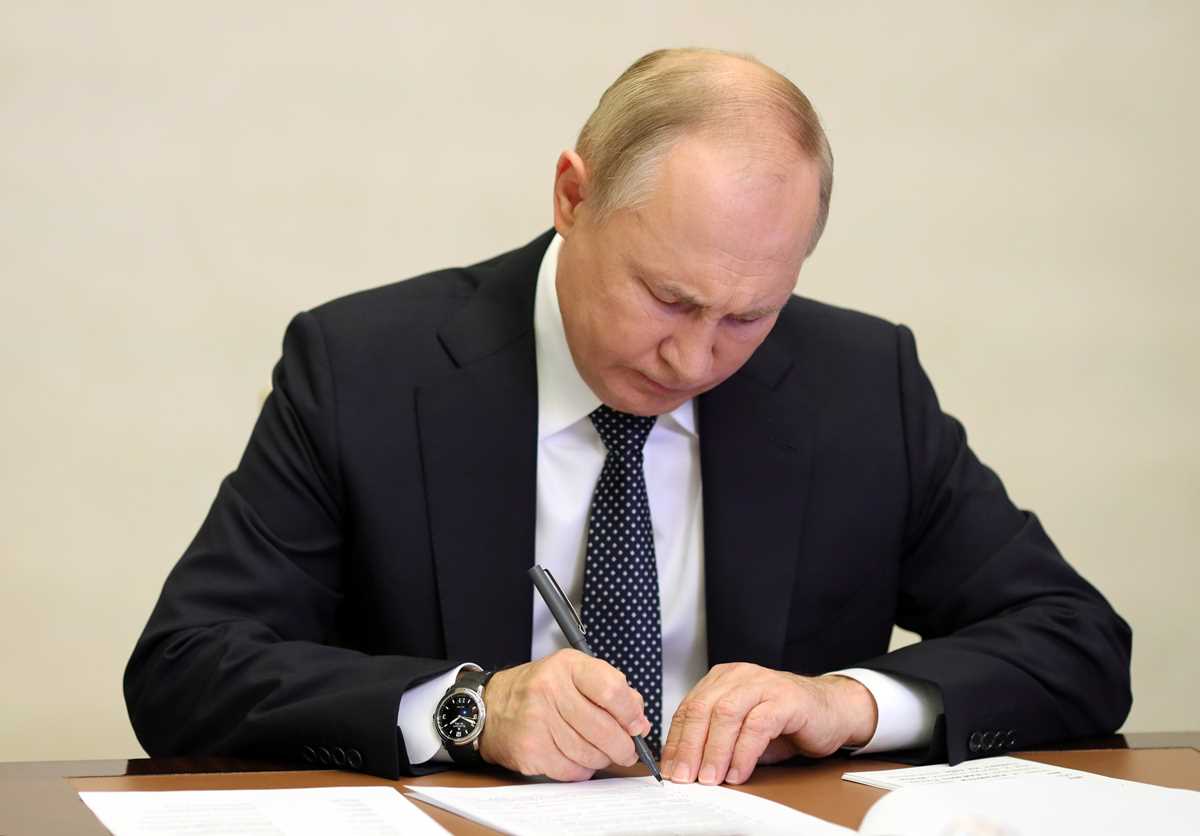 Russian President Vladimir Putin attends the G20 summit via videoconference at the Novo-Ogaryovo residence outside Moscow, Russia, Sunday, Oct. 31, 2021. The two-day Group of 20 summit is the first in-person gathering of leaders of the world’s biggest economies since the COVID-19 pandemic started. (Evgeniy Paulin, Sputnik, Kremlin Pool Photo via AP) 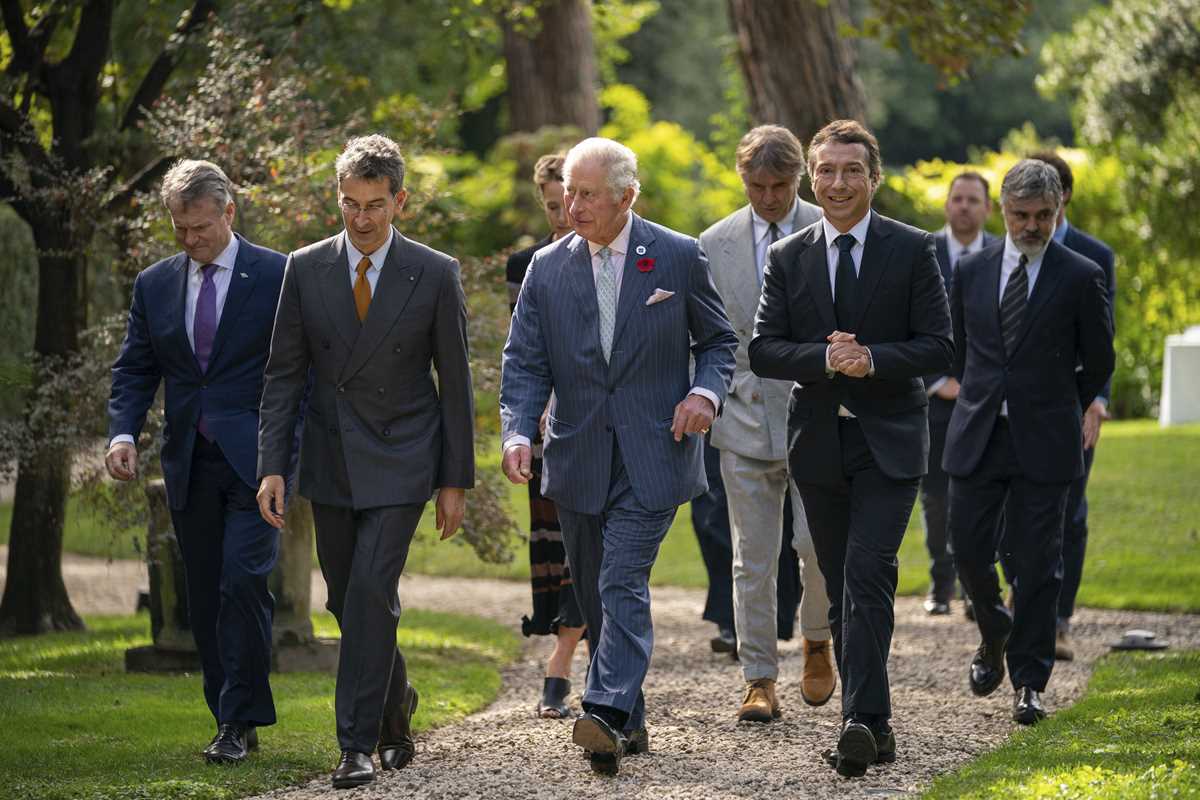 Britain’s Prince Charles, centre, meets members of the Fashion Coalition, one of the SMI’s ten Industry Coalitions which includes CEOs from some of the leading fashion houses including Giorgio Armani, Mulberry and Chloe before viewing The SMI Fashion Coalition’s Digital ID, a virtual certificate that records each item’s history at the Villa Wolkonsky Residence Gardens, in Rome, Sunday, Oct. 31, 2021. (Aaron Chown/Pool Photo via AP) 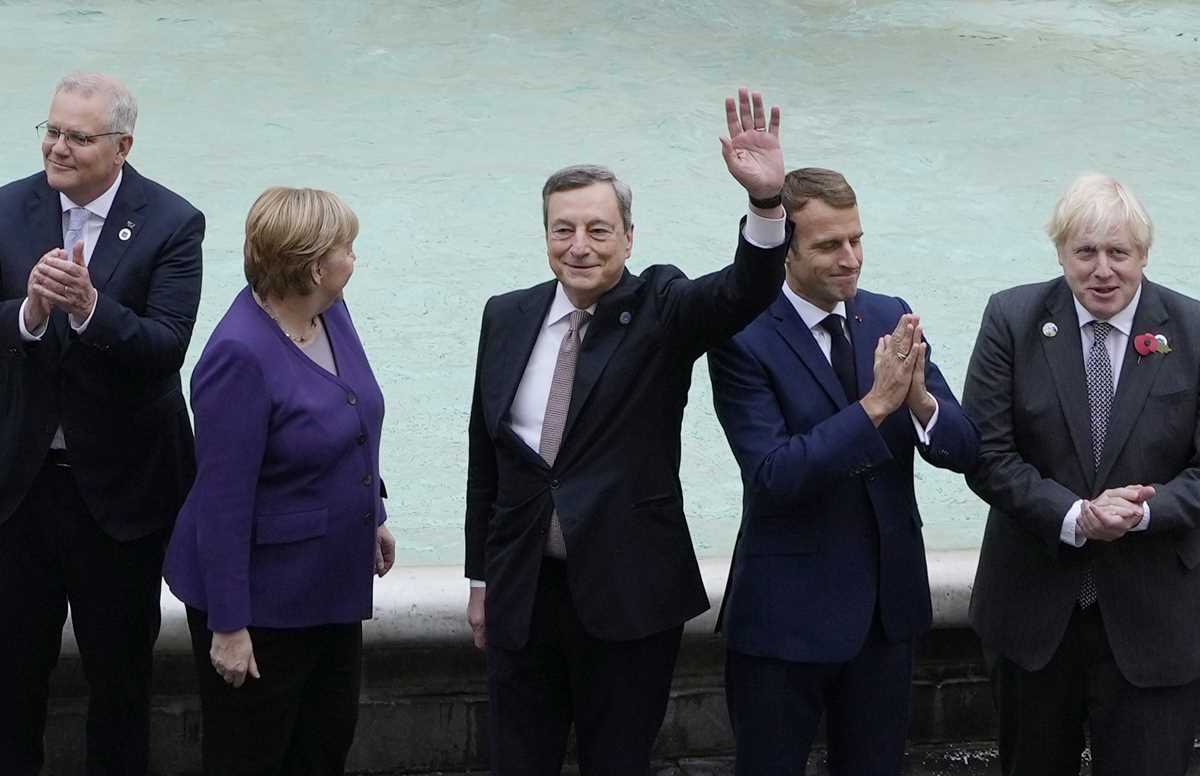 The Latest on the Group of 20 summit in Rome:

ROME — Leaders of the world’s biggest economies have agreed to end public financing for coal-fired power generation abroad, but set no target for phasing out coal domestically as they wrapped up a two-day summit that laid the groundwork for the U.N. climate conference in Glasgow, Scotland.

According to their final meeting communique, Group of 20 leaders also made a compromise commitment Sunday to reach carbon neutrality “by or around mid-century.”

The Group of 20 countries represent more than three-quarters of the world’s greenhouse gas emissions. Summit host Italy had been looking for solid targets on how to reduce emissions while helping poor countries deal with the impact of rising temperatures.

Without those targets, momentum could be lost for the larger annual talks that officially opened Sunday in Glasgow and where countries from around the globe will be represented, including poor ones most vulnerable to rising seas, desertification and other effects.

According to the communique, the G-20 reaffirmed past commitments by rich countries to mobilize $100 billion annually to help poorer countries cope with climate change, and committed to scaling up financing for helping them adapt.

Biden and European Commission President Ursula von der Leyen said at a joint appearance during the Group of 20 summit that the agreement represented a renewed partnership on economic and environmental matters. The deal would address the excess capacity that can distort the steel market and create a framework for reducing the carbon-intensity of steel and aluminum production that contributes to the warming of the earth.

6 stocks make up our compound income portfolio, which yields 24 dividend payments a year.

Claim our free investment report which details 6 companies in our Forever Dividend Stocks.

Biden said that “dirty steel” made in China would be restricted from accessing the American and European markets, though all like-minded economies could participate in the agreement.

“By harnessing our diplomatic and economic power, we can reject the false idea that we can’t grow our economy and support American workers while tackling the climate crisis,” the president said.

Von der Leyen kept smiling at Biden and calling him “dear Joe” as they discussed the deal, an apparent sign that the U.S. president had made progress in repairing relations with Europe after the partnership suffered during the Trump years.

The agreement was first announced Saturday in Rome by U.S. national security adviser Jake Sullivan, U.S. Trade Representative Katherine Tai and U.S. Commerce Secretary Gina Raimondo. They said the Article 232 tariffs, as they are known, would not be removed entirely but that some quantity of European steel and aluminum will be allowed to enter the U.S. tariff-free.

In return for Europe dropping its retaliatory tariffs, the U.S. would also ensure “that all steel entering the U.S. via Europe is produced entirely in Europe,” Raimondo said.

The post-Brexit spat over the granting of licenses to fish in Britain’s coastal waters threatens to escalate within days into a damaging French blockade of British boats.

After the 30-minute meeting between Macron and Johnson on the fringes of a Group of 20 summit in Rome, a French top official said both leaders agreed Sunday there was a need to talk to each other “in a situation of important tensions.” He said measures need to be taken “as soon as possible” to get to a de-escalation.

Britain, however, denied the leaders had agreed to take steps to de-escalate the spat, saying it was entirely up to France to calm the waters.

The U.K. government said in a statement that during the meeting, Johnson “reiterated his deep concern” over France’s rhetoric and “expressed his hope that the French government would de-escalate.”

Britain’s exit from the economic rules of the 27-nation bloc at the start of this year means the U.K. now controls who fishes in its waters. Britain says it has granted 98% of applications from EU vessels, and now the dispute comes down to just a few dozen French boats with insufficient paperwork.

France claims some vessels have been denied permits to fish in waters where they have long sailed. French Minister for European Affairs Clement Beaune on Sunday accused Britain of “targeting” France in a “political choice” and said Britain had breached the Brexit deal agreed by both sides.

ROME — President Joe Biden has told Turkish President Recep Tayyip Erdogan that their countries must better manage disagreements after the partnership between NATO allies was tested by Turkey’s threat to no longer recognize the U.S. envoy and its purchase of a Russian missile defense system.

Biden and Erdogan met for nearly an hour of closed-door talks while the two leaders were in Rome for the Group of 20 summit. Turkey’s role as a NATO ally has come under sharp scrutiny in recent weeks.

During Sunday’s meeting, Biden reaffirmed Turkey’s importance as a NATO ally as well as its defense partnership with the U.S., but raised with Erdogan concerns Turkey’s possession of the Russian S-400 missile system, the White House said in a statement afterward.

The Turkish president has said he’s open to buying a second Russian missile system even though Turkey was kicked out of a U.S. program to buy F-35 combat planes and defense officials were sanctioned after it bought the Russian-made S-400 system. The U.S. strongly objects to the use of Russian systems within the NATO alliance and says it poses a threat to the F-35s.

Erdogan’s office said in a statement that the meeting with Biden was held in a “positive atmosphere” in which the leaders expressed the “joint will to further strengthen and improve Turkey-U.S. relations and agreed to establish a common mechanism accordingly.”

The statement also said there was “satisfaction with the mutual steps taken on climate change.”

ROME — Prince Charles has urged world leaders to heed the “despairing voices” of young people who will bear the brunt of climate change.

The heir to the British throne said a United Nations climate summit that opens Sunday in Glasgow, Scotland, “literally is the last-chance saloon” for the Earth.

Charles told Group of 20 leaders meeting in Rome that they have an “overwhelming responsibility to generations yet unborn.”

“It is impossible not to hear the despairing voices of young people who see you as the stewards of the planet, holding the viability of their future in your hands,” he said.

Charles, a longtime champion of environmentalism, said he was “at last sensing a change in attitudes and the build-up of positive momentum” on climate change. He said governments must play a leading role, but that the private sector “holds the ultimate key to the solutions we seek.”

On Monday, Charles is due to welcome leaders to COP26 in Glasgow. His 95-year-old mother Queen Elizabeth II was due to attend but has been advised to rest by her doctors.

ROME — Leaders of the world’s biggest economies are taking in the sights in the Eternal City, visiting Rome’s Trevi Fountain before getting back to work hammering out a final statement on climate change.

As the water gurgled behind them, the Group of 20 leaders each tossed a coin into the enormous Baroque-style fountain that has been the backdrop of many a film, most famously Fellini’s “La Dolce Vita.”

Legend has it that if you throw a coin into the fountain, you’ll return to Rome. Not all members of the G-20 participated in the Sunday coin toss; notably absent was U.S. President Joe Biden.

The fountain, which draws its source from Rome’s ancient aqueducts, went through various phases of design before its current version was inaugurated in the mid-1700s. It depicts Neptune, the god of the sea, taming the waters. Built into a wall of the Palazzo Poli behind it, the fountain draws its name from its location at the confluence of three streets, or “tre vie,” in Rome’s historic center.

The coins are regularly scooped out of the travertine basin of the fountain and given to charity.

7 Stocks to Buy That Will Benefit From Inflation

There are two narratives that are getting conflated when it comes to inflation. The first is whether or not inflation is occurring. And the second is whether inflation will get out of control.

To the first point, the clear answer is absolutely. There are price increases in everything from commodities to semiconductor chips. And even though lumber prices have gone down it’s a good bet that many consumers will put off their deck projects for another day.

And, of course, inflation numbers tend to strip out gas and groceries – but those are precisely the areas where consumers feel inflation the most. Inflation is real.

But is this just “transitory” as many analysts and the Fed itself claim? Or is it only the beginning of something much worse? The answer to those questions is probably above our pay grade.

As an investor, the inflation narrative only changes where you allocate your investment dollars. And for the most part, you’re probably only looking at a small percentage of your portfolio.

However, the first rule of investing is to not lose money so it’s important to identify companies that can provide a hedge against inflation – transitory or otherwise.

That’s the focus of this special presentation. Right now there are many strong companies that benefit when inflation is on the rise.

View the “7 Stocks to Buy That Will Benefit From Inflation”.