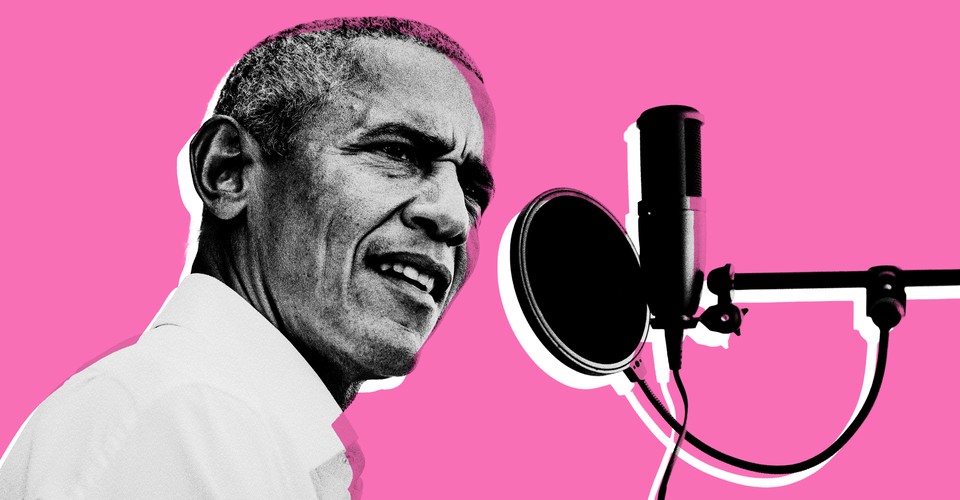 After hours of searching conversation about America and the human soul, the former president of the United States reiterated his brand identity. “Here’s what makes me optimistic … because, you know, I’m the hope guy,” Barack Obama told Bruce Springsteen in a chat recorded last year for their podcast, Renegades: Born in the USA. Transcripts of that conversation have now been adapted into a book with the same title that also features reproductions of Obama’s speeches, snatches of Springsteen’s lyrics, and hundreds of photographs.

In 2008, Obama became the “hope guy” by promising national unity after the turbulent George W. Bush years. Marketed by street-art posters and celebrity sing-alongs, deploying a dynamic oratorical style and an inspiring personal story, the would-be first Black president pitched himself as a transformational figure—and pitched America on the story of progress it could tell itself if it elected him.

From the January/February 2017 issue: My president was Black

Today, American optimism is tougher to rouse. Obama’s presidency was followed by the election of an open racist—and an open cynic—whose supporters seem ever more hostile to democracy with each passing week. In the Renegades conversation, Obama acknowledges that the country has entered a perilous state since Donald Trump took office. But what gives him hope now are today’s young people. Americans under 35 “overwhelmingly … do not believe in discriminating” or a “grossly unequal” economic system, he says. As he tells Springsteen, “Your songs and my speeches or books, or this conversation … I think their purpose is to let that next generation know, ‘You’re on the right track.’”

That explanation is both helpful and worrying for anyone who’s wondering why perhaps the most popular politician in America is spending his time creating coffee-table books with rock stars. Since leaving office, Obama has repositioned himself as a cultural influencer—because he shares the national misapprehension that content will save us.

If Obama is hoping to encourage young voters, Renegades is certainly a roundabout way to do it. The generation that invented cheugy doesn’t seem like the target audience for a heavy book whose cover features the words DREAMS—MYTHS—MUSIC on a black-and-white photo of two chortling Baby Boomers. No doubt the $40-a-piece Renegades is really aimed at the dads and granddads of America, just in time for the holiday gift-giving season.

The effort is part of Obama’s broader bid to build an infotainment empire. In 2018, he and Michelle Obama formed Higher Ground, a production company that has signed deals with Netflix and Spotify. Thus far, its offerings include The Michelle Obama Podcast and the Oscar-winning documentary American Factory; its pipeline contains filmed adaptations of books by Michael Lewis and Mohsin Hamid. “We hope to cultivate and curate the talented, inspiring, creative voices who are able to promote greater empathy and understanding between peoples,” read a statement from Barack Obama in 2018.

Read: ‘American Factory’ grapples with the notion of freedom

The two voices curated by Renegades—Obama’s and Springsteen’s—hardly need elevation, and the project might seem like just a lark, a retirement perk for the president. Dig into the conversation as it is presented in the book, though, and it comes to feel anything but incidental: Here, essentially, is the blueprint for post–White House Obama-ism. That’s not just because it involves two über-Americans discussing America—money, music, race, gender, and John Wayne. The project’s deeper subject is influence: What shapes us? How do we shape others?

Everywhere, Obama emphasizes narrative, conversations, and art. He seeks, he says in the book’s introduction, to create “a more unifying story that starts to close the gap between America’s ideals and its reality.” Springsteen admits that he tries to change people’s lives every time he goes onstage. The two men banter about the impact that John Ford, Woody Guthrie, and news coverage of the moon landing had on even their most personal life decisions. When he chose to go into community organizing in the ’80s, Obama says, “I was swimming backward to a different idea of America,” compared with his profit-seeking peers, who were aligned with the movie Wall Street.

Obama’s public interest in the arts is committed and long-running, spanning at least from his 1995 memoir, Dreams From My Father, to his recent habit of releasing playlists. Renegades reminds readers how, as president, he turned the White House into a cultural center: A multipage spread lists musicians he had play concerts there. At one point, Springsteen shares the story of how the seeds of his Broadway show were planted during a presidential performance (making for the second Tony-winning sensation, after Hamilton, that Obama can take some credit for).

Anyone who cares deeply about art should be heartened to see a man who has wielded hard power giving significant consideration to softer forms of influence. He is correct that culture often maps to the values that inform political decisions, and he is smart to pull illustrations from his own life. After all, his rhetoric and his presidency may well have contributed to the beliefs of the younger generation that he now says will rebuild America.

Still, the question of whether our entertainment shows us who we are or makes us who we are should be treated with humility: We will never know the answer, and it varies from person to person, and from work to work. Obama seems almost tragically fixated on the idea that poetry, podcasting, or TV programming can heal our national wounds—even though the tales that he himself keeps telling demonstrate that it is not so simple.

Take, for example, the way Obama and Springsteen want to rewrite the story of American masculinity. Springsteen and Obama both grew up with fathers who were distant from their sons for different reasons—and they note how that distance seemed to amplify the strong-and-silent stereotypes set by Hollywood’s male heroes. “The message American culture sends to boys about what it means to be a man … hasn’t really changed all that much since we were kids,” Obama writes in one chapter introduction, adding that “narrow, distorted ideas of masculinity contributed to so many damaging trends we continue to see in the country.”

How exactly to reform the American man? Springsteen recalls feeling alienated from the possibility of love and commitment until, in his 30s, he started seeing a therapist. He and Obama also bond over the way that their wives helped them evolve. This is fascinating material, but with its personal specificity, it’s not exactly a how-to guide for American guys. Rather, you get the sense that their conversation itself—the spectacle of two strong men sharing in their vulnerability and introspection—is meant to be a model that encourages the reader’s own soul-searching.

Perhaps some of the Springsteen fans who receive this book as a gift will find themselves moved to greater sensitivity and self-awareness. But Obama expresses special concern about the messages young men receive from the media (he doesn’t need to say the name of his Spotify-podcasting colleague Joe Rogan for readers to get the gist), and the question of how to shift those particular messages remains unaddressed. When I was listening to the Renegades podcast, I texted a young father I know to ask whether he’d be interested in listening. He shot back that he couldn’t imagine inviting yet more advice from Boomers about how to live his life.

Indeed, many of the people Obama wants to reach are the ones who systematically avoid him for reasons of culture, politics, or both. In Renegades, Obama demonstrates the toxic effects of Fox News by recalling an anecdote from late in his White House tenure. He had gone to visit a community college in a red state, and the locals tuning in to his speech from a nearby bar asked, “Is this how Obama usually sounds?” to a reporter who was there with them. Clearly they had been getting their news from sources that rarely broadcast the commander in chief speaking uninterrupted. (This appears to be Obama’s recollection of a 2015 Washington Post story.)

“Now, keep in mind, at that point I had probably been president for the last five or six years,” Obama says to Springsteen. “The filter was so thick that I, as president of the United States, could not reach those guys unless I actually went to their town.” Obama then starts to muse about how to pierce such bubbles, but doesn’t get much further than mourning the monoculture once exemplified by The Ed Sullivan Show, which went off the air 50 years ago.

If we do have any monoculture left, it perhaps lies in the widespread consensus around the idea first articulated by the conservative pundit Andrew Breitbart: “Politics is downstream from culture.” The notion that what entertains us shapes how we vote has gone from a hazy supposition to a strategic maxim across the ideological spectrum, giving rise to a complementary truism: When everyone agrees that politics is downstream from culture, culture becomes downstream from politics. To assume that any given HBO series or pop album in 2021 isn’t trying to get across some social message is to be naive.

The eerie thing is how clear it has become that politics works as entertainment. Viewers really do enjoy dogma-driven diversion. Watching Fox News is an addictive pastime for millions, and so is digesting thoughtful conversations between progressive celebrities. But these products rarely exist to challenge their consumers—they exist to reinforce what they already think. The paradox is that the arts-and-politics nexus dilutes its own power at a certain point. People become primed to steer away from works that they suspect to be the other side’s propaganda.

Obama is contributing to this tailspin, quite plainly, with Renegades, though perhaps for good reason. The revenue it brings in may well fund more cunning efforts by Higher Ground to cut through our cultural feedback loops. Thinking that the target audience for this product has already internalized all of its ideas is probably too cynical. Certainly no one is harmed by, say, revisiting the bracing rhetoric that Obama used in his eulogy for John Lewis or that Springsteen used in his lyrics for “American Skin (41 Shots)” (both of which are among the works reprinted in the book, featuring their creator’s handwriting). It is also worth noting that Obama continues to do the more traditional work of a politician—speechifying, fundraising.

Yet the irony of Renegades, which is likely destined to bounce around the same echo chambers that its authors bemoan, is that it only emphasizes the limits of politics-as-culture. The Biden era has already provided a clinic in the seriousness of those limits: Here is a president, like Obama before him, backed by Hollywood and enjoying a popular-vote majority—yet still unable to pass his agenda due to intractable political obstacles. Would any amount of conscientious conversation nix the filibuster or sway Joe Manchin? Money, demographics, institutions, and pure power still rule, and many of the stories we tell lately in hopes of shifting that reality just end up distracting from it.