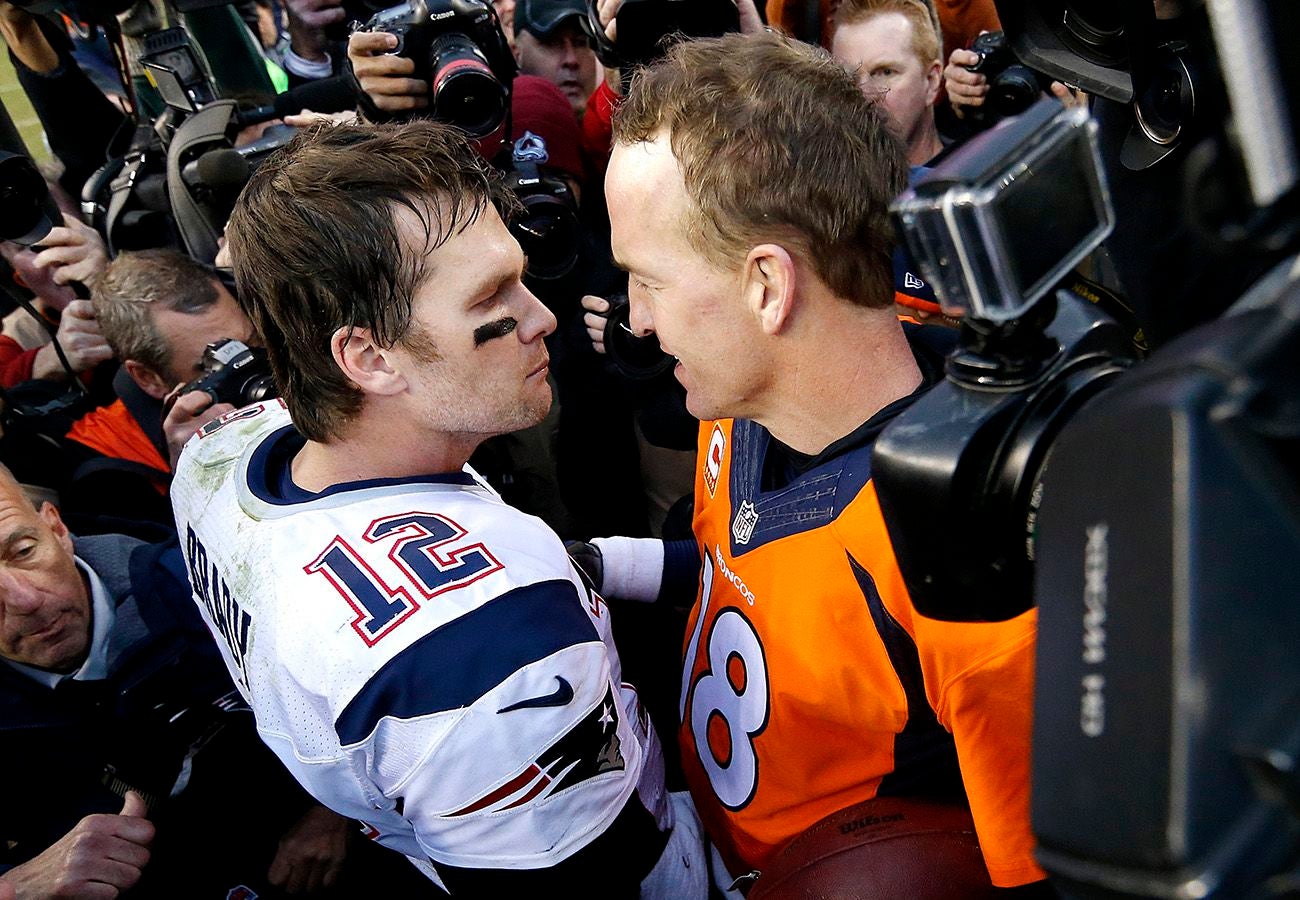 ESPN has brought a new dimension to their coverage of Monday Night Football this season with the “ManningCast,” starring brothers Peyton and Eli, who welcomed their most-anticipated guest of the year this week: Buccaneers quarterback Tom Brady.

From the barbs with his old counterparts to the mind of Rob Gronkowski, here are some of the best moments from Brady’s second-quarter appearance on ESPN2.

Brady opened the night with a compliment and a jab, praising the Mannings’ work on the air this season — but with Peyton donning his younger brother’s Ole Miss jersey, Brady couldn’t help but take aim at his old foil.

“It’s great to see you both, I could never turn you two down so the opportunity to come on and be with both you guys at the same time? That’s an automatic yes,” Brady said. “I much prefer to see you guys on the football field, but I think you guys are doing a pretty great job here too.

“Although that jersey on Peyton’s looking a little tighter than I remember. What’s happening over there?”

Brady has long been self-deprecating about his two Super Bowl losses to Eli Manning and the Giants, who toppled the Patriots in Super Bowls XLII and XLVII.

It came up again on Monday, as the trio chatted about the elder Manning’s recent Hall of Fame induction.

“I was so happy to be there,” Brady said. “I said earlier today how much I admired watching both of you guys play, your incredible careers, and the games we played against each other — although I enjoyed, much more, the ones I played against Peyton than Eli.”

The younger Manning didn’t miss a beat: “I enjoyed all our games, Tom.”

“There was something about those silver [Patriots] helmets,” Brady continued. “When you saw them, it was like… you talk about lighting it up, Eli was just unstoppable. And whatever the D-linemen were drinking before those games, I need to get some of that.

“Between [Michael] Strahan and Osi [Umenyiora] and Justin [Tuck], I’m still getting over that soreness.”

Brady threw the 600th touchdown pass of his legendary career on Sunday — the first quarterback to do so — but had to pull some strings to get the historic ball back.

Wide receiver Mike Evans, forgetting the occasion, gave the ball away to a fan in the stands.

Bucs fan Byron Kennedy returned the ball in exchange for two signed Brady jerseys, a helmet, another jersey autographed by Evans, Evans’ game-worn cleats, season tickets through the end of next season, and a $1,000 credit to the official team store; a haul, but likely much less than Kennedy could’ve fetched at auction.

Brady revealed Monday that he’d help make up the difference, awarding Kennedy one bitcoin, currently worth just under $63,000.

“Byron realized he lost all his leverage once he gave the ball away, he should have held it and kept as much leverage as possible,” Brady joked. “I think it worked out pretty well, I’m also giving him a bitcoin, which, that’s pretty cool too. At the end of the day, I think he’s making out pretty well.”

With Gronk, keep it simple

After Gronkowski revealed to the world that he’s not much for studying film in his own “ManningCast” appearance, Brady poked fun at his long-time target, claiming the big tight end’s mind is too sharp for all that info.

“The thing about Gronk is that he’s such a quick study,” Brady said, tongue firmly in cheek. “Sometimes when you give Gronk too much information he processes it so quickly, you can’t give him too much early in the week … His mind doesn’t need to be bogged down with film study. He’ll come to me later in the week and he’ll say, ‘hey, what do I have to do?’

“And I’ll say, ‘just get open, catch the ball and run with it. It’s not that hard. You’re a tight end, you don’t have to call the plays, just get open. Run away from the guys in the other-colored jerseys.”

Careful what you wish for

The Buccaneers defense finished sixth in yards allowed last season, and was crucial to Tampa Bay’s Super Bowl run; they still can’t get any credit from their signal-caller.

After the Seahawks bit on a Jameis Winston pump fake — as the Saints quarterback had already crossed the line of scrimmage and couldn’t throw anyway — Brady took some jabs at, oh, half the league.

“And the defense,” Brady said, “when you give them any credit to figure that out — have you ever been in some of those defensive meeting rooms? You wonder why they play defense, and after about two minutes you go, yup, they could never be an offensive player. Defense is kind of like a dog chasing a car, just get the guy with the ball.”

“I’m sure [Buccaneers safety] Antoine Winfield really appreciates those comments,” Peyton Manning replied. “Tell me how that conversation goes at breakfast in the morning.”

Brady might be cherishing his non-contact jersey at practice this week.