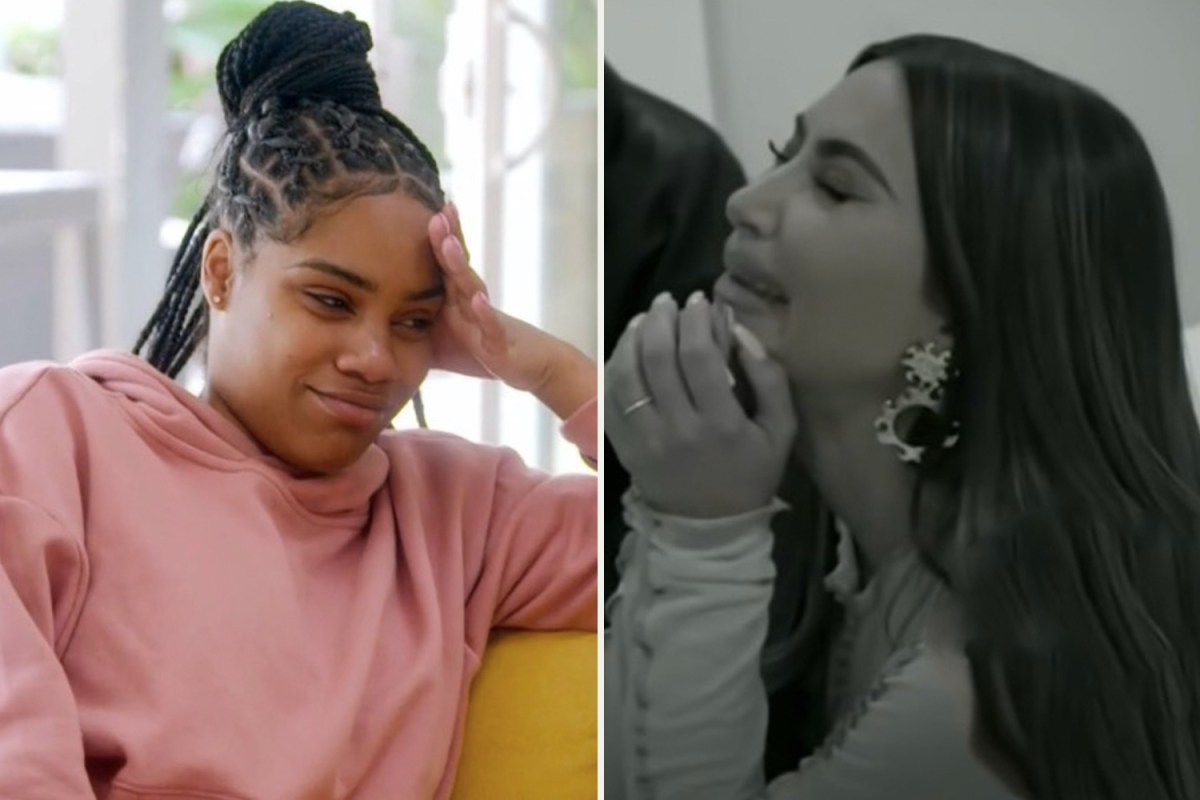 TEEN Mom star Ashley Jones confession on Family Reunion that she was afraid to divorce Bar Smith and wind up “like sad Kim Kardashian.”

Ashley and Bar secretly wed ahead of the MTV reunion show.

During the most recent episode of Teen Mom Family Reunion, Ashley opened up to Leah Messer about the status of her strained marriage to Bar.

The pair were chatting about Leah’s new romance when the West Virginia native asked: “So what are you and Bar gonna do after this?”

Ashley responded uncertain: “I don’t know. Obviously we’re gonna go back to the same house, but you know I think maybe, like, therapy.”

She elaborated in a confessional, saying: “Right now, my relationship with Bar is just at a space where it need some TLC and if it doesn’t get that, it could fall apart.”

“Not really, I’ve been married a month, but I don’t want to be married and divorced in the same year.”

Ashley said in an interview: “I really want Bar and I to sit down with Coach B because I just want us to work on our communication.

“I don’t want to jump to divorce and make it final when I feel like there’s still hope.”

CHATTING WITH THE DOC

The duo got their chance to chat with Dr. Bryant later in the episode.

Bar joked: “I feel like this is the hot seat.”

Immediately, Dr. Bryant asked the duo: “What is our relationship status.”

Ashley answered: “We don’t know,” while Bar said, “We’re married but…” and trailed off.

The Teen Mom star went on: “I feel like we’re just in a awkward state. Like, obviously we’re married, but to me it doesn’t feel like what I thought a marriage would feel like.”

She added: “I don’t know if I was expecting too much but I feel like before we got married it seemed like everything was fine and then as soon as we signed the papers and got married I just feel like it was more serious.”

Asked what led to their rift, Ashley said: “I don’t need to hear anymore good jobs. I want to be able to say, look what I’m doing but also my husband is doing X, Y, and Z.”

Bar confessed: “I need to achieve more for myself. Everything that I have started to do I’m excited about, I’m passionate about, I always see the bigger picture to it but I always find a reason to distract myself from it.”

The pair then moved on, revisiting an earlier comment Ashley made about having “daddy issues” and feeling like she “married my dad.”

She said in a confessional: “Even though I have a really great step-father, my biological father has a substance abuse problem.

“When he’s around he isn’t really around because he’s kind of absent mentally and then he also is absent physically for like, long periods of time. So, that really f**ked me up as a kid.”

Bar got emotional admitting he has similar issues and grew up feeling like he was “not good enough.”

Dr. Bryant asked: “Who told you that you weren’t good enough growing up?”

“I don’t know,” he responded, revealing that his own father was absent from his life due to a drug problem.

Dr. Bryant observed: “The thing about you is you’re not even mad … you’re just, like, broken-hearted.”

Ashley revealed the unconventional nature of her relationship with Bar in an early episode of the show.

Co-stars were quick to notice a ring on Ashley’s ring finger after the she arrived on set.

Cheyenne Floyd sat down with her to get to the bottom of it, asking: “Let me look at your hand.

Ashley responds: “It’s what the f**k ever,” which seemed to confuse Cheyenne who asked, “You guys came together. Are you not together?”

She went on to explain: “We’re married but not together,” adding that she “decided this.”

“I have a lot of anger built up with Bar. I speak one language, he speaks another and we don’t hear each other,” Ashley said on the show, which flashed to an old Teen Mom episode featuring a blowup between them.

Although Ashley claimed to be broken up with her husband, she said in a confessional that she’s hopeful they can “get some tools to be able to speak to each other in the same language.”

She recounted some of Bar’s struggles, telling Cheyenne: “He had an ankle monitor and that put him on the straight and narrow. He was on that for, like, a year and some change.

“During that time, I saw so many positive things that’s when we got married. Now that it’s off, it’s just complacent.”

Cheyenne advised: “I feel like you guys have been through so much together because you started so young and I don’t want you to use that as, like, a crutch or reason to say.

“This is nothing against him.”