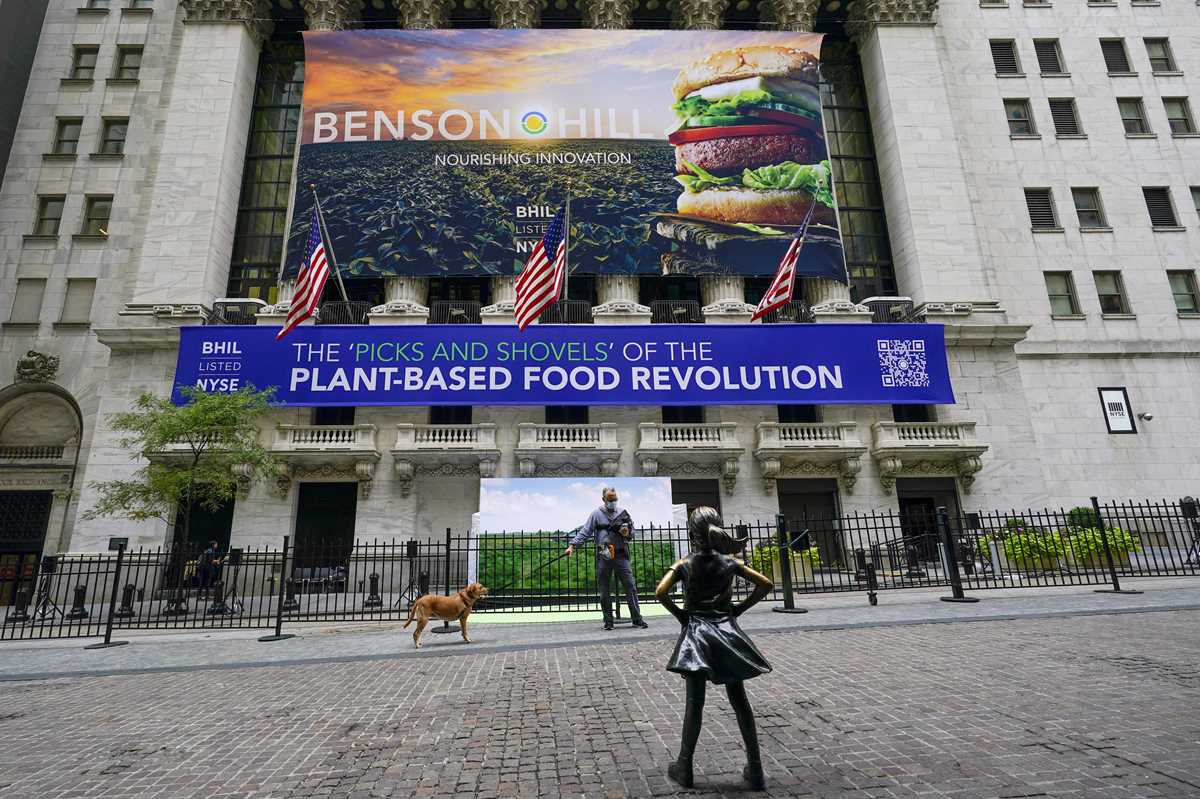 A man walks his dog past the Fearless Girl statue outside the New York Stock Exchange, Tuesday, Oct. 5, 2021, in New York. Stocks are drifting mostly lower in early trading on Wall Street as investors look ahead to another big week of earnings reports, this time from major technology companies including Facebook and Apple. The S&P 500 was down 0.1% early Monday, Oct. 25, 2021. (AP Photo/Mary Altaffer, file)

NEW YORK (AP) — Wall Street notched some more record highs on Monday as a better-than-expected profit reporting season gets into higher gear. The S&P 500 rose 0.5%, surpassing the peak it set on Thursday. Tesla jumped to the biggest gain in the S&P 500 after Hertz said it will buy 100,000 Model 3 vehicles for its fleet. Stocks broadly have been pushing higher recently as companies turn in much stronger profit reports for the summer than analysts expected. With roughly one in four S&P 500 companies having reported, more are topping expectations than usual, and by a wider margin.

THIS IS A BREAKING NEWS UPDATE. AP’s earlier story follows below.

NEW YORK (AP) — Wall Street is ticking further into record heights on Monday, as a better-than-expected profit reporting season gets into higher gear.

Tesla jumped to the biggest gain in the S&P 500 after Hertz said it will buy 100,000 Model 3 vehicles for its fleet. The landmark deal for the electric-vehicle industry sent Tesla up 12.3%, and because it’s one of the biggest stocks in the market, Tesla’s moves have an outsized effect on the S&P 500.

Stocks broadly have been pushing higher recently as companies turn in much stronger profit reports for the summer than analysts expected. With roughly one in four S&P 500 companies having reported, more are topping expectations than usual, and by a wider margin, according to FactSet.

Elevator company Otis Worldwide became the latest to join the list, reporting revenue and profit that both topped Wall Street’s forecasts. Its stock fell 4.1%, though, after its forecast for earnings for the full year of 2021 fell slightly short of expectations.

And you have a potentially explosive company.

S&P 500 companies so far have reported profits for the third quarter that were nearly 46% higher than year-ago levels. That has companies in the index on track to report overall growth of roughly 32.5%, according to FactSet. That compares with expectations for roughly 27% growth when the third quarter closed on Sept. 30.

Several of the market’s most influential stocks are set to report their own profits in the upcoming week. That includes Apple, Amazon, Microsoft and Google’s parent company, Alphabet. Because they’re the four biggest companies on Wall Street by market value, their stock movements have a huge effect on the S&P 500, even more than Tesla’s.

Facebook, the fifth-largest company in the S&P 500, will report its quarterly results after trading closes on Monday. It’s been dealing with controversy over how much it favors making profits over harming its users.

High inflation that’s been more stubborn than expected also continues to create winners and losers in the market.

Energy producers were strong after the price of U.S. oil topped $85 per barrel during the morning. It’s the first time that’s happened in roughly seven years, though the price sank back as the day continued.

But such gains were checked by losses for Kimberly-Clark, the maker of Kleenex and Huggies diapers, and other consumer products companies that are struggling with the effects of high inflation.

Kimberly-Clark cut its forecast for full-year 2021 profit because of the higher costs it’s paying for energy and other goods. It’s also one of many companies dealing with snarled supply chains around the world as economies bounce back from the pandemic’s shutdown. Its stock fell 2.6%.

High inflation has stuck around, even though many economists and investors had earlier said they expected only a “transitory” bout.

Fed Chair Jerome Powell on Friday said inflation is likely to stay elevated well into next year amid gummed-up supply chains and shortages. That could put pressure on the central bank to halt the record-low interest rates that it’s been providing to support markets and the economy.

Historically low interest rates, along with strong corporate profit growth, have helped the S&P 500 more than double from the bottom it set in March 2020 in the early days of the pandemic.

The pandemic also still remains, of course. A resurgence of infections during the summer helped to slow the economy’s growth, and some on Wall Street worry about how big a hit corporate profits will ultimately take because of it.

Moderna rose 6.1% after it reported encouraging data on use of its COVID-19 vaccine in children.

Before you consider Tesla, you’ll want to hear this.

MarketBeat keeps track of Wall Street’s top-rated and best performing research analysts and the stocks they recommend to their clients on a daily basis. MarketBeat has identified the five stocks that top analysts are quietly whispering to their clients to buy now before the broader market catches on… and Tesla wasn’t on the list.

While Tesla currently has a “Hold” rating among analysts, top-rated analysts believe these five stocks are better buys.