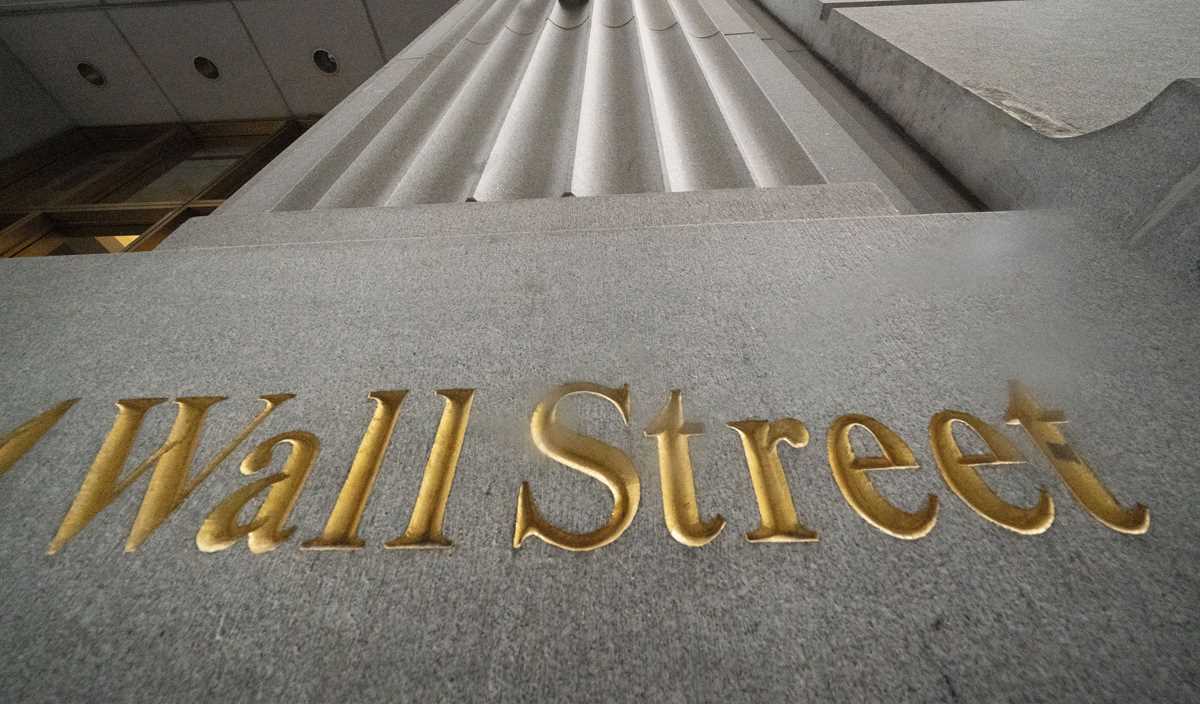 A sign for Wall Street is carved in the side of a building on Nov. 5, 2020 in New York. Stocks are opening lower on Wall Street, Wednesday, Nov. 17, 2021, pulling the S&P 500 further below the record high it set last week. (AP Photo/Mark Lennihan, File)

Stocks fell on Wall Street Wednesday as the broader market takes a choppy turn amid lingering concerns about rising inflation.

Smaller company stocks fell more steeply than the broader market in a sign that investors were nervous about economic growth. The Russell 2000 fell 1.1%.

Visa fell 5.7% after after Amazon said it would no longer accept Visa cards issued in the U.K. in a dispute over fees. Payments processing rival Mastercard fell 4.1%.

A mix of health care companies and companies that rely on direct consumer spending held up better than the rest of the market.

Major indexes have been choppy as investors shift focus following several weeks of solid corporate earnings. A series of worrisome reports on inflation tripped up stocks last week and the broader market has been swaying between gains and losses so far this week.

Investors are closely watching retail sales reports and retailer earnings as they try to gauge just how much rising inflation is impacting business operations and consumer spending. Many companies have warned that profit margins could suffer as they face supply chain problems and higher costs overall. Consumers have been absorbing higher prices on a wide range of goods and that has investors worried about the potential for a pullback in spending.

Forget Everything You’ve Ever Known About Plant-based Food. This Company is Crushing It.

Macy’s will report its latest financial results on Thursday.

Investors received a mixed report on the housing market. Construction of new homes in the U.S. fell 0.7% in October, but a big jump in the number of permits last month points to anticipation by builders that supply chain problems that have dogged them for much of the year will soon ease. Homebuilders were mixed following the report.

7 Social Media Stocks That Are Worth Your Attention

If you have a child in high school, they likely will not know a world that didn’t include social media. And for better or worse, social media is here to stay. That’s because these companies have developed ways to keep their users engaged. And engagement is the keyword.

For the most part, social media companies generate money through ad revenue. Simply put, the more active (i.e. engaged) users they have, the more revenue they generate.

Higher revenue leads to earnings growth. And earnings growth is always a harbinger of a higher stock price. That’s why it’s important for investors to pay attention to this sector even if they’re not active users of social media themselves.

For the purposes of this presentation, we’re not including Facebook (NASDAQ:FB). The company is well known as the leading social media stock. However, the company’s recent troubles are also well documented. And as of this writing, FB stock remains under pressure. It may, and likely will become a buy and perhaps at a better valuation. But for now, Facebook doesn’t get a like.

But if you’re interested in which social media stocks may be good buys, we’re happy to give you “7 Social Media Stocks That Are Worth Your Attention”

View the “7 Social Media Stocks That Are Worth Your Attention”.