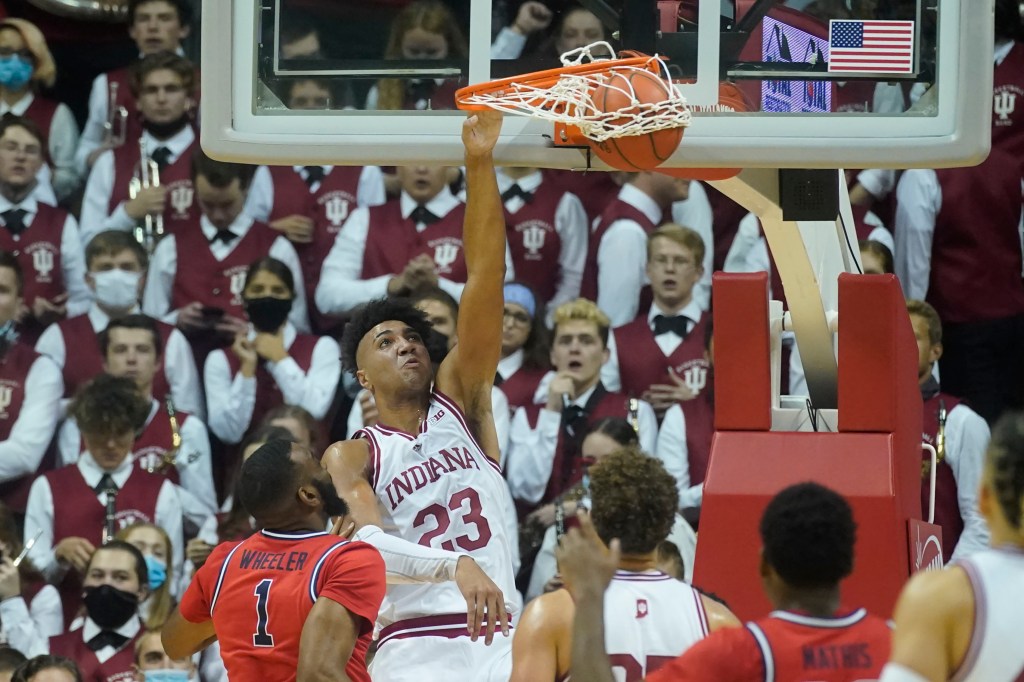 BLOOMINGTON, Ind. — The first half was ugly. The second half was frustrating.

Combine the two, and St. John’s suffered its first defeat of the young season.

Facing one of its two big non-conference tests, the Johnnies started slowly. They rebounded in the second half. But it wasn’t enough. The hole was too deep. Their inability to make enough clutch plays down the stretch wouldn’t allow it in a 76-74 loss to Indiana in the Gavitt Tipoff Games at sold-out Assembly Hall.

Julian Champagnie poured in 32 points and Stef Smith, by far the best of the Red Storm’s five transfers, added 16. But Posh Alexander, who did play a strong second half, had two crucial turnovers late — he had five for the game — and was held to 10 points on 3 of 8 shooting. The Johnnies had no answer for Indiana star forward Trayce Jackson-Davis (18 points, 10 rebounds and four assists).

After the sloppy, and at times passive first half, St. John’s came out a different team. The Red Storm ripped off a 10-2 run to get back within five. The press began to take effect, with Alexander forcing consecutive turnovers. And when Champagnie hit a 3-pointer from the right wing, St. John’s was within three, at 49-46, with 14:39 remaining.

It got even on two Alexander free throws with 8:49 left, but Indiana answered with five straight points to reclaim its hold on the game. Jordan Geronimo broke the tie with a right-wing 3-pointer. Indiana built the lead to seven, St. John’s pulled even again, and the Hoosiers again went back ahead by four, this time for good.

Three times in the final minutes, the Johnnies got within a point, but they could never get that pivotal stop. They did get one last chance, with 8.4 seconds left, but Champagnie’s desperate off-balanced heave failed to draw iron.

The tone was set almost immediately, in the form of a 9-0 Indiana run. The Hoosiers punched first and punched often. They were the more aggressive team, more physical and crisper at both ends of the floor.

While St. John’s was passing the ball around the perimeter and unable to get into the paint, Indiana was playing off of Jackson-Davis, getting any shot it wanted. It adeptly handled the Red Storm pressure, taking advantage of opportunities in transition.

A 9-2 spurt, which included the ejection of St. John’s guard Montez Mathis for a flagrant foul following his turnover in the backcourt, gave the Hoosiers a 29-16 lead. At the break, St. John’s was down by 12, and fortunate to be that close, after shooting 33 percent from the field, hitting just 3 of 12 from distance and committing as many turnovers (nine) as made field goals (nine).

Alexander, a nonfactor after committing two fouls in the opening 6:54, managed just two points in the opening half and attempted only two shots. Tareq Coburn and Smith, graduate transfers who were brought in to elevate the Johnnies’ perimeter shooting, were a combined 0-for-6 from the field.