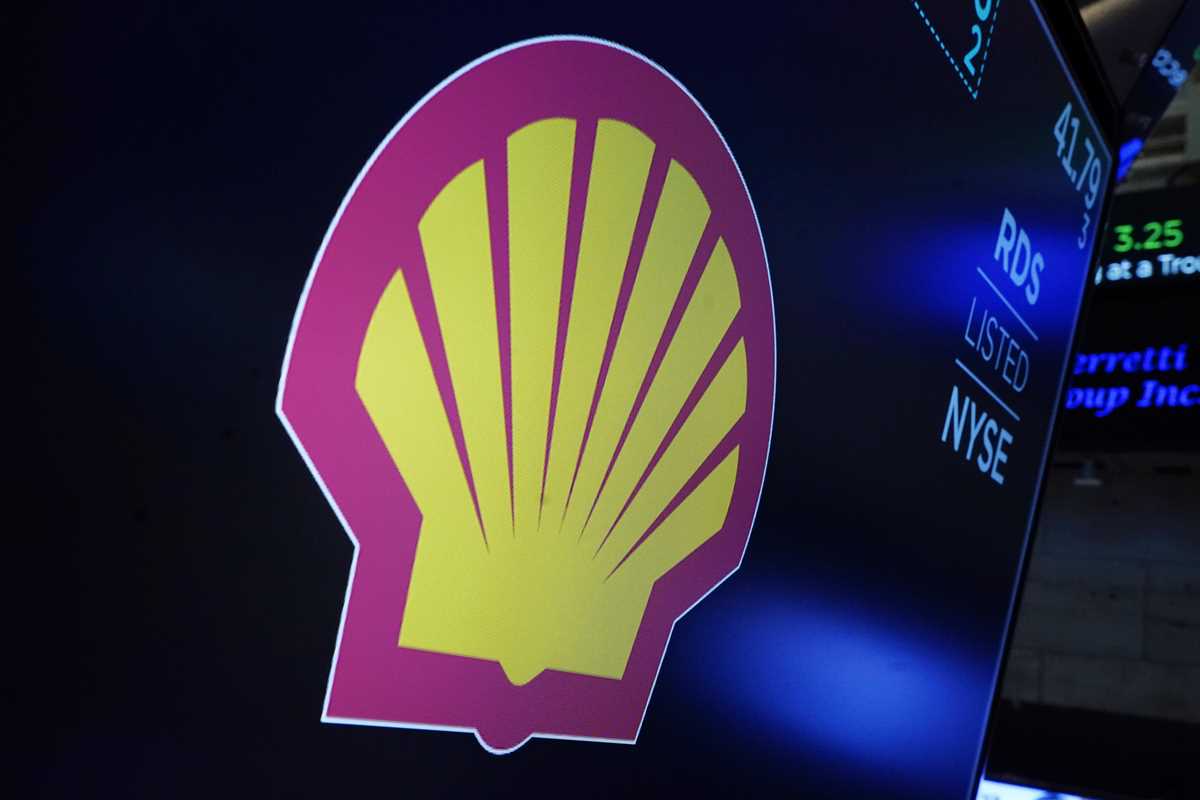 The logo for Royal Dutch Shell appears above a trading post on the floor of the New York Stock Exchange, on Dec. 1, 2021. Royal Dutch Shell investors are expected to change the company’s name and share structure on Friday, Dec. 10, 2021, as the oil giant struggles to prove its green credentials amid criticism from all sides that it has been slow to cut greenhouse gas emissions. (AP Photo/Richard Drew, File)

LONDON (AP) — Royal Dutch Shell investors are expected to change the company’s name Friday and approve moving its headquarters from the Netherlands to the United Kingdom as the oil giant faces criticism it has been slow to cut greenhouse gas emissions.

Shell says the changes will accelerate payouts to shareholders and help the company shift its focus to renewable energy. Shareholders met Friday to vote on the plan, including a simplified corporate structure that will give the Anglo-Dutch firm a single class of shares and unify its headquarters in London.

The move illustrates the challenges oil companies face as they pivot from a business model that has generated huge profits and reliable dividend payments for shareholders toward a more uncertain future tied to wind, solar and biofuels. With returns from the new ventures still unknown, investors are demanding quick returns from existing assets, said David Elmes, an energy expert at the U.K.’s Warwick Business School.

“They’re walking a very difficult tightrope of keeping shareholders happy with the level of dividend and buybacks today versus getting permission from shareholders to switch investment from fossil fuels to low-carbon energy,” Elmes said. “And it seems to be at the moment, that they’re still having to pay an awful lot to shareholders today to get their support for the transition.”

Until now, Shell has had two separate classes of shares, one for its Dutch arm and one for its U.K. arm, which together comprise Royal Dutch Shell Plc. The structure is a legacy of the company’s creation in 1907, when a British import-export business that once traded in exotic shells merged with Royal Dutch to create what ultimately became one of the world’s biggest oil companies.

In addition to creating a single class of shares, the company plans to drop Royal Dutch from its name.

Shell says its new corporate structure will allow it to accelerate share buybacks. The company has already promised to return $7 billion to shareholders as it completed the sale of assets in Texas and New Mexico to ConocoPhillips this year.

Knightscope, Inc., a developer of advanced physical security technologies focused on enhancing U.S. security operations, has commenced its offering of up to $40 million of Class A common stock, with shares to be listed immediately following closing on NASDAQ under the ticker symbol “KSCP.”

At least one investor is calling for Shell to go further and split into two companies, one focused on legacy oil and gas operations and another on renewable energy. Third Point LLC, a New York hedge fund, said in October that the move would allow both companies to run more efficiently, returning more money to shareholders and accelerating progress on climate change.

Breaking up Shell would make it easier to respond to the competing demands that are pulling management in different directions, Third Point CEO Daniel Loeb said in a letter to investors.

Shell’s stock price has risen 16% in the past 12 months, lagging behind the 31% gain in Chevron shares and the 46% jump for ExxonMobil.

“You can’t be all things to all people,” Loeb said. “In trying to do so, Shell has ended up with unhappy shareholders who have been starved of returns and an unhappy society that wants to see Shell do more to decarbonize.”

Shell has said it has had preliminary conversations with Third Point and would continue to do so, but it’s resisting a breakup because it wants its fossil fuel businesses to fund the transition.

Other European energy companies have opted to spin off their renewable businesses. In October, Rome-based Eni said it was planning an initial public offering of that business. Spain’s Repsol is reportedly considering a similar move for its low-carbon assets.

The pressure for oil companies to shift away from fossil fuels has increased rapidly since the 2015 Paris climate agreement set a goal of limiting global temperature increases to 1.5 degrees Celsius over pre-industrial levels.

Shell Chief Executive Ben van Beurden has made it clear that he wants the company to remain competitive in a world that gets more of its energy from renewable sources. The company last year set a target for achieving net-zero carbon emissions from both its operations and the products it sells by 2050.

To achieve this goal, Shell says it plans to expand its electricity business, invest in renewable energy and build more charging stations for electric vehicles. It’s also investing in carbon capture and storage and “nature-based solutions” such as restoring forests and wetlands to offset carbon emissions.

“At a time of unprecedented change for the industry, it is even more important that we have an increased ability to accelerate the transition to a lower carbon global energy system,’’ Chairman Andrew Mackenzie said in a video before the vote. “This simpler structure will cause Shell to accelerate the delivery of its powering progress strategy while creating value for shareholders, customers and wider society.’’

In May, the Hague District Court ordered Shell to cut carbon emissions 45% by 2030, saying the company’s net-zero target “is not concrete, has many caveats and is based on monitoring social developments rather than the company’s own responsibility for achieving a CO2 reduction.”

Shell said it was appealing. The new shareholder structure will have no impact on the case, the company said.

Meanwhile, Follow This, an investor group that lobbies oil companies to move faster on climate change, supports Shell’s new structure and having it remain a single entity because it would allow management to focus on cutting carbon emissions, founder Mark van Baal said.

Remaining one company means Shell could use the cash flow from declining fossil fuel sales to invest in renewables, said van Baal, whose group includes 8,000 investors and holds less than 1% of Shell’s stock. Breaking up the company would benefit short-term investors at the expense of cutting emissions, he said.

Shell already is moving too cautiously, with one report suggesting its emissions may actually increase 4% by 2030, van Baal said. Long-term investors want change, fearing that floods, fires and other damage exacerbated by climate change are hurting the profits of other companies in their portfolios.

“Institutional investors are really losing their patience,” van Baal said. “The whole world’s economy is at risk because of climate change.”

For the better part of the last year, Congress has had “big tech” in its crosshairs. But the reasons why largely depend on what side of the aisle a particular individual was on.

But big tech scored an important, albeit not final, victory in late June. At that time, a U.S. judge dismissed two separate complaints against Facebook (NASDAQ:FB). The question in front of the judge was whether Facebook held a monopoly on social media. Due to a surge in the company’s stock price after the ruling, Facebook became a member of the exclusive $1 trillion market cap club.
While big tech companies will remain under the Congressional microscope, there’s no denying that investors are looking at the ruling as a signal to rotate back into tech stocks. And that’s the focus of this presentation. What tech stocks should you be buying as anti-trust pressure eases?

It would be easy to start and end the list with the FAANG stocks. After all, the motto “Keep it Simple Stupid” comes to mind. There are simply those companies that offer products that are changing our lives now and will continue to do so in the future. And furthermore, customers will continue to pay for their products.

And I do have a couple of these stocks on my list. But the bulk of the stocks on this list are less expensive alternatives to at least one of the FAANG stocks. It doesn’t mean they’re superior companies, but a rising tide tends to lift all boats. And that means these companies have a large upside and you can purchase the stocks for a lot less.

View the “7 Tech Stocks That Are Heating Up as Anti-Trust Talk Cools Down”.