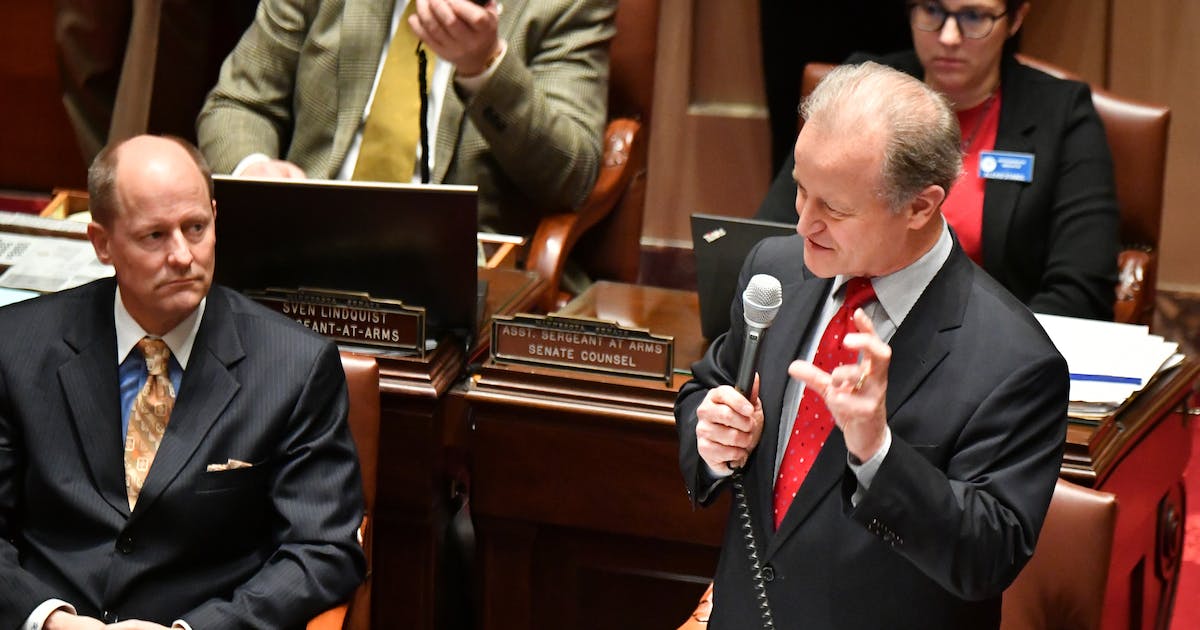 Fierce debate over a proposal that could limit tougher sentences for people who commit new crimes while on probation is upending the state’s sentencing guidelines commission and setting up a showdown to be resolved in the upcoming legislative session.

The commission unanimously agreed to hold off on a scheduled vote over the proposal on Thursday, as some members expressed dismay over the recent direction of debate over the topic. That includes forceful opposition from key GOP state legislators who have accused the board — made up largely of members appointed by DFL Gov. Tim Walz — of radical partisanship.

“What I’m troubled by is how, at least in part, this discussion has devolved into exactly what this body was created to avoid — the use of rhetoric versus principled policy making guided by thoughtful research,” said Corrections Commission Paul Schnell.

Minnesota’s sentencing guidelines work on a point system that accounts for the severity of the crime and an offender’s criminal history. Consideration over whether to eliminate a half-point assigned for custody status has stoked concerns over whether it would lead to lighter punishment for repeat offenders at a time when violent crime has surged in the Twin Cities and elsewhere.

“This allows criminals who have already been given a break for probation instead of prison time even less incentive to follow the rules or follow the law,” said state Sen. Warren Limmer, a Maple Grove Republican who chairs the Senate’s public safety and judiciary committee. “The last thing we need to do right now is to have less punishment for criminals.”

Supporters of the change have hailed its potential for lessening sentences for low-level drug and property crimes, which data show are most commonly charged in cases of people offending while on probation or parole.

Justin Terrell, executive director for the Minnesota Justice Research Center, said that the spate of homicides, carjackings and other crimes rocking communities recently have all occurred under the existing rules. Keeping the custody status point in place does nothing to deter crime, he said.

Republican legislative leaders gathered before Thursday’s meeting to implore Gov. Tim Walz to intervene, pointing out that the governor appointed eight members of the 11-person commission. Limmer accused the commission of reflecting a partisan agenda that “puts criminals ahead of victims.”

Limmer said Thursday that he plans to reintroduce legislation he proposed in previous years that would require Senate confirmation of Sentencing Guidelines Commission members. Limmer also proposed abolishing the commission in the past, but stopped short of saying he would push for that again.

Republicans are also preparing legislation focused on county prosecutors who choose not to charge certain felony crimes. Sen. Paul Gazelka, an East Gull Lake Republican and candidate for governor, planned to announce a new bill on prosecutorial discretion at a press conference on Friday.

Last month, Walz said that he trusts the commission’s “vast swath of expertise.”

“I think trying to tell Minnesotans that this [change] is somehow going to make them less safe is simply not true,” Walz said. “You can’t lock your way up and imprison your way out of some of these things, but you can be smart about making sure the most violent offenders are not out.”

The commission voted 6-4 last November to advance the proposal. During an initial round of seeking public input, it received more than 3,500 responses — 95% of them opposed eliminating the custody status points.

All three of the state’s major law enforcement associations and the County Attorneys Association oppose the measure. Thursday’s decision to postpone the vote was applauded by conservative opponents of the measure.

“Minnesotans will be safer today because the Sentencing Guidelines Commission backed away from this misguided policy change,” said Jeff Van Nest, a new policy fellow for public safety at the Center of the American Experiment thinktank.

The commission is revisiting an issue it first took up in 2018 when it reduced the original one-point enhancement for custody status to a half point. That led to criminal history scores coming in with an extra half point and the question of whether judges should round up or down when considering the severity of a sentence to impose.

Supreme Court Justice Gordon Moore, Walz’s only appointee to the state’s high court so far and also a member of the commission, said Thursday that the issue was “too important to be frankly rammed through with any timeline in mind here.”

Moore lamented that the debate has become an “all or nothing approach” and suggested that judges should retain discretion to impose tougher penalties on those who commit crimes that violate “a fundamental requirement of probation” to obey the law.

“It seems to me that a more severe sanction for offenders who commit a new felony offense while on probation … reflects a reasoned determination that the offenders’ new crime is a more flagrant violation of the criminal laws and does make the offender more culpable,” said Moore, who previously served as a county attorney and judge in Nobles County.

Schnell told the commission on Thursday that he still supports the proposal but added that the group needed to better “engage and educate” community members, criminal justice professionals and legislators on it.

“When I think about all the public input — whether for or against — whether grounded in principled argument, one of the thousands of solicited one-click emails, or rhetoric of fear — it’s clear that we, as members of this commission, have more work to do to help our fellow Minnesotans understand and consider the true implications of custody status,” he said. “We haven’t done that.”