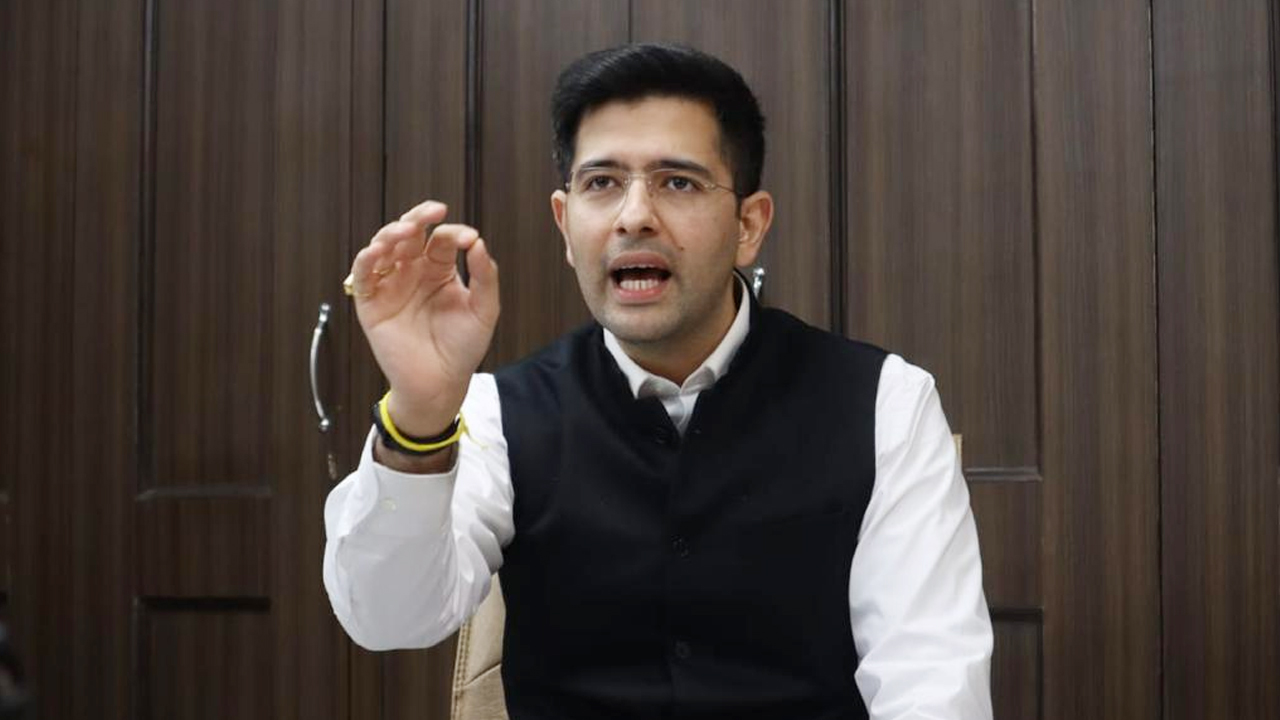 The Aam Aadmi Party will reward Punjab CM Charanjeet Channi with Rs. 25,000 for taking action against every site where illegal sand mining is taking place, announced AAP Co-incharge for Punjab and MLA Shri Raghav Chadha. He said that on one hand CM Channi has made a hollow promise that those who share information about sand mafia will be given 25,000, while on the other he transferred the forest officer who complained against his beloved sand mafia. The Chief Minister of a state is always aware and has complete information about the whereabouts of illegal mining in his state, but Channi Sahab has made a gimmick of announcing 25,000 to fool the people, he went on, the drama must end.

Even today, illegal sand mining shamelessly continues in CM Channi’s assembly despite the Aam Aadmi Party’s raid and exposition of the same. It seems that the Chief Minister himself has become the biggest sand mafia of Punjab, Shri Raghav Chadha concluded. Calling out Punjab CM Charanjeet Channi on his latest gimmick, AAP Punjab Co-incharge and MLA Shri Raghav Chadha said, “AAP Punjab CM Charanjeet Channi Sahab has made an announcement saying that anyone who contacts the Punjab Government with proof or information regarding illegal sand mining in the state will be rewarded with Rs. 25,000.

But I would like to point out to Channi Sahab himself, that illegal sand mining practices are taking place at various sites within his own assembly constituency Chamkaur Sahib. Till date, you have not taken any action against these illegitimate practices taking place under your own nose. And now you are asking people for proof, for information about the presence of the sand mafia? The Chief Minister of a State always has complete information when it comes to such matters – the CM knows where all this illegal mining is being practised in broad daylight in his state. But now you are making a fool out of common people, putting up a show of monetary incentives.” He continued, “This ‘dramebaazi’ needs to stop, Channi Sahab.

If you truly wanted to bring about change, it would take you no more than 5 minutes to round up all the officers in the Punjab Government – from DC to SSP – and have all the information you want ready at your disposal. You will easily have a list of all such sites where such illicit stealing of sand is taking place, where all the sand mafia is operating. But you will just not take action against them, it is obvious. Your own constituency is seeing blatant unlawful sand mining, and then you talk about incentives of 25,000 rupees.” Shri Raghav Chadha declared, “Today, the Aam Aadmi Party is announcing that it will give 25,000 rupees to Punjab CM Channi Sahab for every single illegal sand mining site that he takes action against. AAP will incentivise shutting this unlawful trade throughout Punjab for its own Chief Minister. Channi Sahab, you know where in your state this illegal sand mafia is operating.

You take strict action against each and every one of those sites, and the Aam Aadmi Party will ensure that Channi Sahab gets a reward of Rs. 25,000 upon doing so for each site. So we are challenging Channi Sahab today, that if your intentions are clear – that you intend to put a rein in the mining mafia, to put a stop to illegal sand mining in Punjab – then you go ahead, and take immediate action. We will reward you. But for your own sake, put an end to these gimmicks.

Do not make a mockery out of the public.” He added, “The Aam Aadmi Party exposed the illegal sand mining which has been taking place in CM’s own assembly constituency, Chamkaur Sahib, in Jindapur Pind. Our raid brought the truth of the Punjab Government and CM Channi Sahab’s real face to the public. However, despite such a public exposition, even at this very site the illegal mining has not been stopped. It continues, shamelessly, even today under Punjab CM Channi’s own nose. And it seems as if the Chief Minister himself has become the biggest sand mafia in the state.

This hypocrisy of asking for proof and information will not be tolerated. How can you possibly give a cash incentive for information after not taking any action when the Aam Aadmi Party itself presented you with concrete proof? We even shared the Forest Officer’s letter which was addressed to the SDM and the SHO to put an end to the illegal mining taking place in Jindapur Pind in Chamkaur Sahib. But Channi Sahab, not only did you not take any action to terminate the illegal mining taking place on reserved forest land, but your government went ahead and transferred the poor forest officer merely demanding justice. This is the true face of Channi Sahab’s administration.” The AAP Punjab Co-incharge further said, “I have another challenge for Channi Sahab today – if you are still adamant on pretending to not know the whereabouts of these illegal sand mafias, then I myself will take you to visit these sites. You join me and I will take you to each and every illegal mining site throughout Punjab. And so, I challenge you to take strict action against the sand mafia and put a stop to illegal sand mining.

It sometimes appears as if Channi Sahab is most definitely colluding with this sand mafia for these illegal practices to take place throughout Punjab. Then to produce a facade of ‘active governance’, to mislead the common man and cheat them by making such gimmicky announcements – ‘I will give Rs. 25,000 to whoever gives me information regarding illegal sand mining’ – all a farce.” Shri Raghav Chadha concluded by saying, “I am sharing with you this letter written by the Forest Range Officer of Jindapur Pind. You should take action at the earliest. It falls under your assembly constituency Chamkaur Sahib, you are the MLA. The officer from your own assembly has written this, informing that illegal sand mining is going on in Jindapur. This land of Khasra number 45-46 comes in the reserved forest area. Sand mining cannot take place on the banks of the river here.

But Channi Sahab is letting the illicit trade continue, not batting an eye. Channi Sahab should register the first FIR to file charges against himself in connection with the illicit sand trade going on in Jindapur Pind. I have presented this proof, documents and the address of the region in Jindapur Pind. Now it is on you to take action on this. And keep in mind, we don’t want any 25 thousand rupees from you, Channi Sahab. If you take strict action and put a stop to illegal sand theft in Jindapur Pind, then on the contrary we will give you 25,000 rupees.”