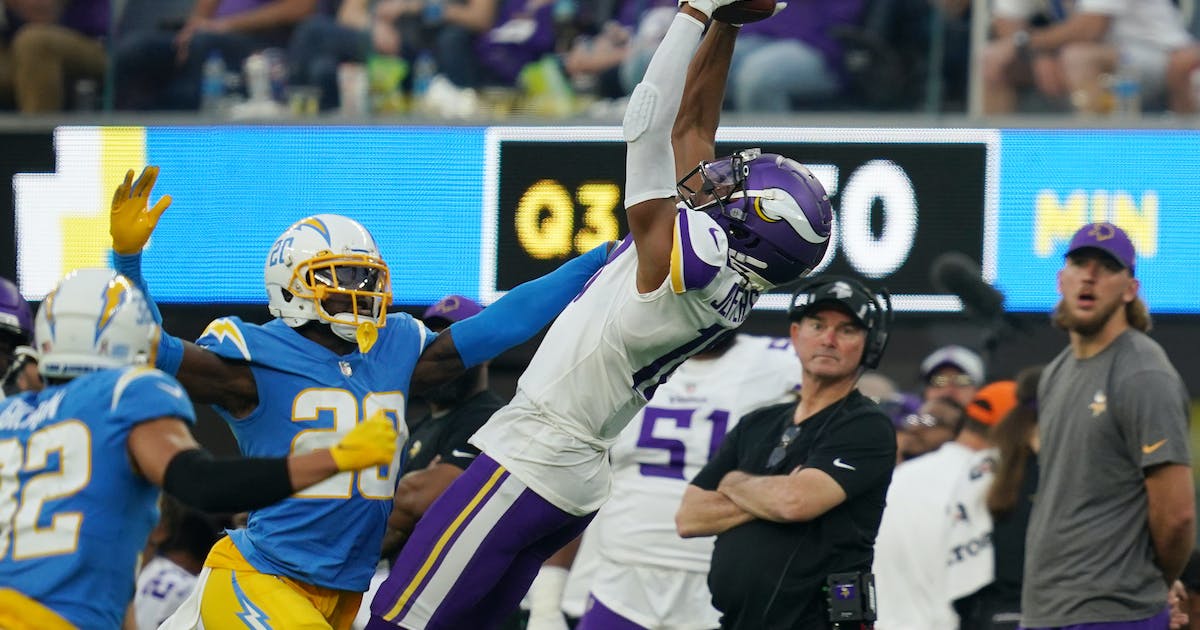 Mike Zimmer publicly admonished his offensive coordinator for sharing with reporters a plan that apparently amounted to a state secret: Throw more passes to the team’s best receiver after practically ignoring him for two games.

Don’t feel bad, Klint Kubiak. Roughly five million Minnesotans had that same idea and were begging and screaming to see it put into action: throw Justin Jefferson the stinkin’ ball!

Zimmer and Kubiak sounded as if they had an epiphany in acknowledging the need to get Jefferson more involved in the Vikings offense, an admission that caused armchair coordinators among us to mutter softly, “Well, duh.”

To no one’s surprise, the move worked wonderfully, with Jefferson catching nine of the 11 passes thrown his way for a season-high 143 yards in the 27-20 win over the Los Angeles Chargers. This after Jefferson was targeted only nine times total in back-to-back losses.

Kubiak and quarterback Kirk Cousins found the template for success. Be aggressive. Throw the ball down the field. Trust Jefferson to make plays even if he’s covered or drawing extra attention.

Football is a complicated sport, but the fundamental premise of this discussion seems quite rudimentary. Jefferson is a special talent and the Vikings’ most dynamic receiver.

Defenses will devise schemes hoping to neutralize him, as happens to all elite receivers. That cannot become a deterrent in making Jefferson a focal point in game-planning or in the flow of games.

The Vikings are 7-4 when Jefferson has been targeted at least 10 times in his one and a half seasons. Watching him slice through a secondary with graceful determination or come down with an acrobatic catch occasionally leaves me with a silly, backyard football thought on strategy: Just throw him the ball every play.

A clarion call for Jefferson to get more activity jogs the memory about Mike Tice’s infamous “Randy Ratio.” Tice concocted an ill-fated plan to throw 40% of passes to the mercurial Moss. Putting a public percentage on targeted passes to one individual is doomed to backfire, but there can be an unspoken philosophy of “the more, the better.”

Cousins targeted Jefferson on 24% of his pass attempts last season and 23% so far this season.

There have been 11 first-team All-Pro receivers the past five seasons. Only two of them were targeted on fewer than 25% of their team’s pass attempts. Nine of the receivers ranged from 28% to 32%.

Of the top five receivers in targets in each season since 2016, the majority fall in a range of 27% to 32%. Jefferson is not far off that pace, but the gap could mean the difference in one or two additional explosive plays per game.

Cousins described the way defenses handle Jefferson as being “week to week.” No. 1 receivers always receive extra attention, so it’s too convenient to use that rationale for not finding ways to counteract it. Davante Adams and Travis Kelce probably don’t encounter straight one-on-one coverage as the norm.

It’s on Kubiak to scheme Jefferson open and then on Cousins to cut it loose and give him an opportunity to make a play — just as he did against the Chargers.

The second part is the main part of this equation. Cousins’ nature is to avoid risky throws, but he has receivers in Jefferson and Adam Thielen who make contested catches look routine. Even if they find themselves being blanketed or fighting through traffic in the secondary, the odds are in the Vikings’ favor that Jefferson and Thielen will win the matchup by either making a catch or drawing a pass interference penalty.

Receivers have the advantage in the modern NFL, making those with special skill and athletic ability even more difficult to contain. Just because Jefferson might be covered doesn’t mean it’s the wrong decision to throw the ball his direction.

If Cousins happens to toss a few more interceptions, so be it. The reward for being aggressive is worth the risk.

Thielen called the aggressive game plan employed against the Chargers the right “formula.” Checkdowns and second-and-long running plays aren’t it.

Zimmer sounded less than pleased with Kubiak announcing that he planned to get Jefferson more touches, which hardly felt like a stop-the-presses declaration. It’s just common sense.