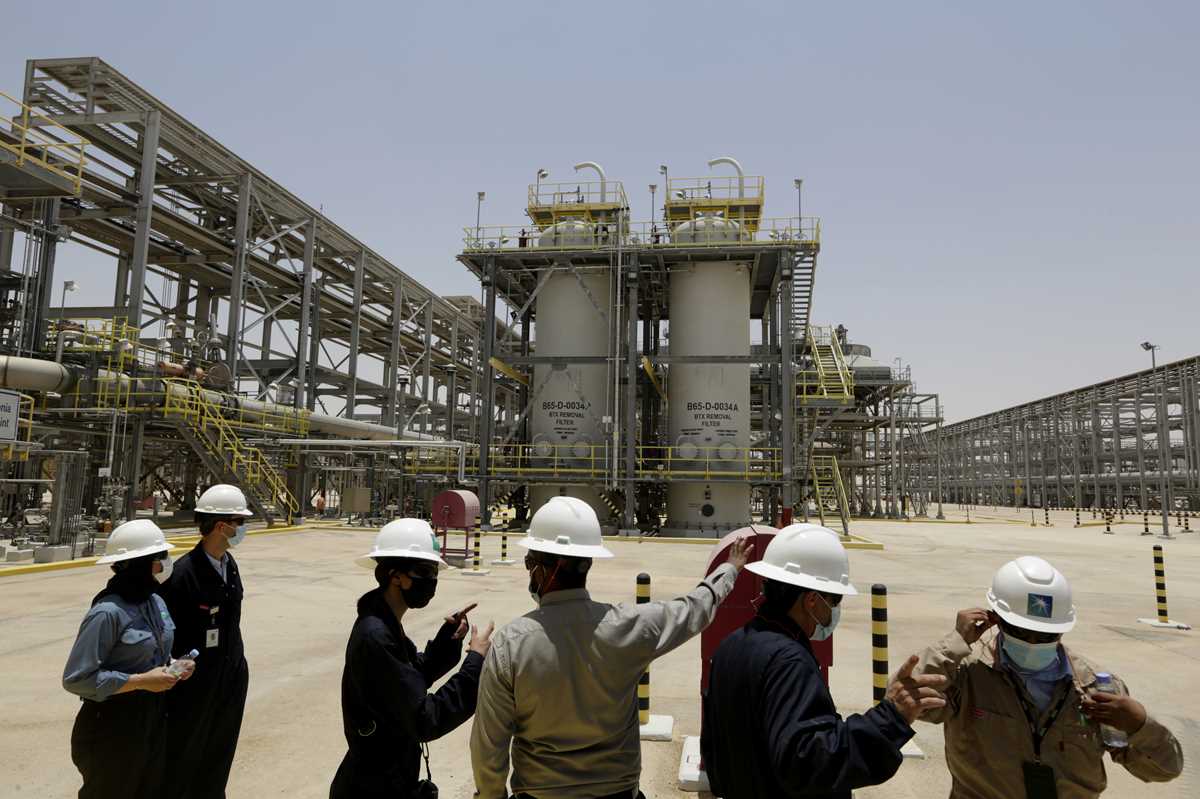 In this June 28, 2021, file photo, Saudi Aramco engineers and journalists look at the Hawiyah Natural Gas Liquids Recovery Plant, which is designed to process 4.0 billion standard cubic feet per day of sweet gas, a natural gas that does not contain significant amounts of hydrogen sulfide, in Hawiyah, in the Eastern Province of Saudi Arabia. The world’s largest oil company, Saudi Aramco, reported $30.4 billion in net income in the third quarter Sunday, Oct. 31, 2021, bolstered by a surge in oil prices and recovery in demand as the coronavirus pandemic eases. (AP Photo/Amr Nabil, File)

Aramco CEO Amin Nasser described the company’s third-quarter results as “exceptional,” a result of “increased economic activity in key markets and a rebound in energy demand,” even as supply chain bottlenecks imperiled the global economic recovery.

The 158% spike in earnings follows the global loosening of virus-induced restrictions, tightening of gas supplies and acceleration of vaccination campaigns that have pushed prices of crude sharply higher. The price of international benchmark Brent crude was trading at over $83.50 a barrel on Sunday.

Consumers and companies are using more gasoline and airplane fuel as governments relax restrictions, leading to a rally across energy markets.

“We are optimistic that energy demand will remain healthy for the foreseeable future,” Nasser said.

Crude prices have been helped by production cuts made by the Organization of the Petroleum Exporting Countries and their allies, a group known as OPEC+, which meets later this week.

As consumption picks up, the group has gradually started adding barrels back to the market, with plans to pump 400,000 more barrels a day each month through December and raise Saudi Arabia’s limit of 11 million barrels to 11.5 million next year.

Once again, the word “Crisis” is being thrown around. But this is unlike anything we’ve seen before…

➔ Major automakers – from GM to Toyota are shutting their factories.
➔ Analysts are warning that Christmas, as we know it, may not happen this year.
➔ And massive food distributor, Sysco, says it’s going to have trouble stocking grocery store shelves.

Not because of a recession or virus…not because of a new lockdown or war… But the very opposite. A new threat which could soon cause empty shelves as far as the eye can see.

The third-quarter earnings from the oil giant, which listed a sliver of its shares three years ago, represented an improvement from the same quarter before the pandemic in 2019, which brought in $21.3 billion.

Shares of Aramco jumped some 1% on the announcement, with a share costing 37.95 riyals, or $10.12 on Riyadh’s Tadawul stock market. Its market capitalization of $2 trillion makes it one of the world’s most valuable companies.

Aramco declared a dividend of $18.8 billion in the third quarter, in line with its target, which will be paid in the fourth quarter. The company has said it would stick by a pledge to pay a $75 billion dividend, nearly all of which will go to the Saudi government, which owns around 98% of the company.

The firm’s capital expenditure, which is mostly directed toward pumping more oil, was $7.6 billion in the third quarter — an increase of 19% from a year earlier.

The company posted the bumper earnings as the major U.N. climate summit opened in Glasgow, where world leaders are due to discuss growing global efforts to tackle climate change this week.

Saudi Arabia has joined over 100 countries in pledging to cut its carbon emissions to net-zero by 2060. However, it has no plans to change its status as a global leader in oil and gas production even as pressure grows on governments to invest in more renewable energy.