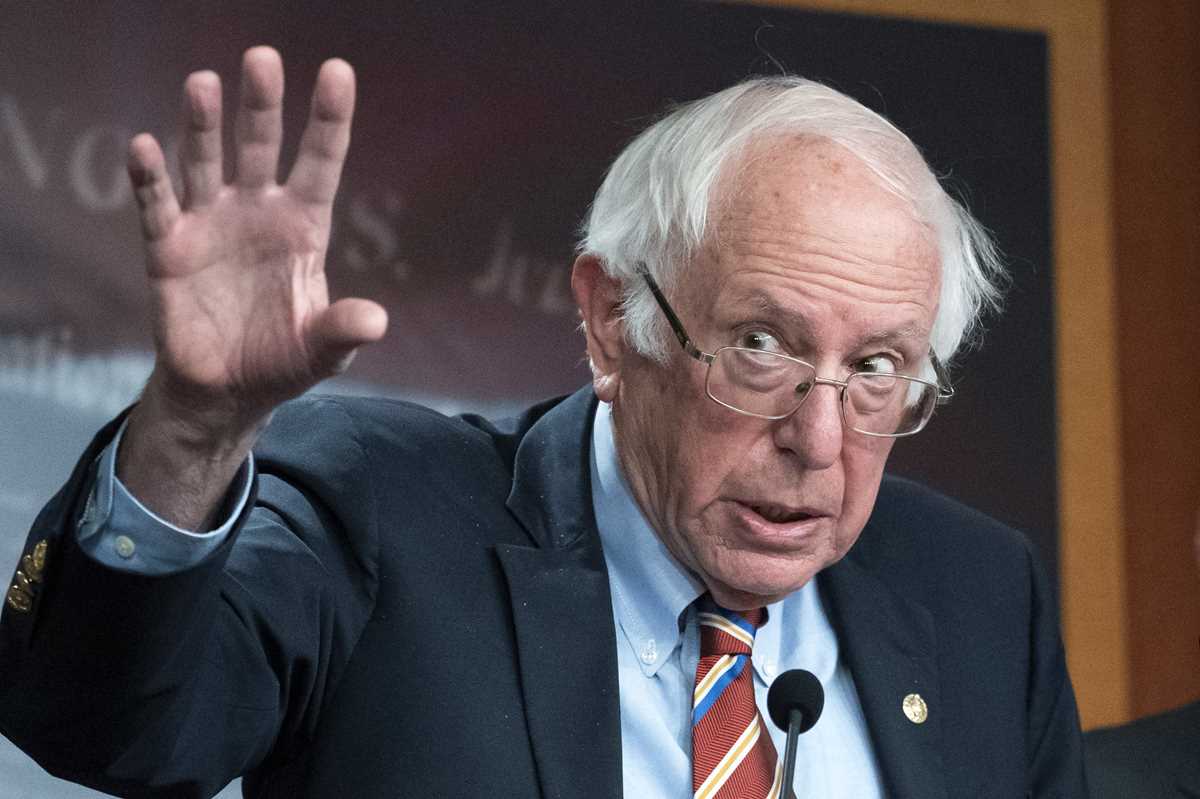 Sen. Bernie Sanders, I-Vt., speaks during a news conference on Capitol Hill, Nov. 3, 2021, in Washington. Sanders is asking the White House to cut back a big Medicare premium hike set to take effect in weeks and tied to a pricey Alzheimer’s drug whose benefits have been widely questioned. (AP Photo/Alex Brandon, File)

WASHINGTON (AP) — Sen. Bernie Sanders is asking the White House to cut back a big Medicare premium hike set to take effect in weeks and tied to a pricey Alzheimer’s drug whose benefits have been widely questioned.

In a letter Friday to President Joe Biden, the Vermont Independent called on the president to act immediately to prevent the portion of an “outrageous increase” in Medicare premiums that’s attributable to Aduhelm, a newly approved Alzheimer’s medicine from drugmaker Biogen, priced at $56,000 a year.

Biden’s massive social agenda legislation takes significant steps to curb prescription drug costs, but Democrats are running the risk that seniors smarting from one of the biggest increases ever in Medicare premiums will turn against them in the 2022 midterm elections. That increase would claw back a big chunk of next year’s Social Security cost-of-living allowance, a boost of about $92 a month for the average retired worker, to help cover rising prices for gas and food.

“Biogen’s $56,000 price of Aduhelm is the poster child for how dysfunctional our prescription drug pricing system has become,” Sanders wrote to Biden. “The notion that one pharmaceutical company can raise the price of one drug so much that it could negatively impact 57 million senior citizens and the future of Medicare is beyond absurd. With Democrats in control of the White House, the House and the Senate we cannot let that happen.” A copy of the letter was provided to The Associated Press.

There was no immediate comment from the White House. Biden is planning a speech Monday on the prescription drug provisions of his legislation, including an annual cap of $2,000 on out-of-pocket costs for Medicare recipients, $35 monthly copays for insulin, inflation rebates that would also help people with private insurance, and the first-ever Medicare-negotiated prices. The catch is that those benefits will phase in over time and the Medicare premium hike would hit after the New Year. It’s not clear if Biden will address the premiums.

This guide will help you evaluate and analyze your trading plan to create a custom options trading strategy tailored to your risk profile and market outlook. Learn how to take your trading to the next level.

The boost in premiums “could not come at a worse time for older Americans all over this country who are struggling economically,” Sanders wrote.

The jump of $21.60 a month is the biggest increase ever for Medicare premiums in dollar terms, although not percentage-wise. As recently as August, the Medicare Trustees’ report had projected a smaller increase of $10 from the current $148.50. Medicare said it had to boost the rate higher to set aside a contingency fund in case the program formally approves coverage for Aduhelm.

Alzheimer’s is a progressive neurological disease with no known cure, affecting about 6 million Americans, the vast majority old enough to qualify for Medicare.

Aduhelm is the first Alzheimer’s medication in nearly 20 years, although it doesn’t cure the disease. The Food and Drug Administration approved the drug this summer, determining that Aduhelm’s ability to reduce clumps of plaque in the brain is likely to slow dementia. That decision was highly controversial, since the FDA overrode its own outside advisers. Many experts say Aduhelm’s benefit has not been clearly demonstrated. The Department of Veterans Affairs declined to list the medicine on its roster of approved drugs.

Medicare has begun a formal assessment to determine whether it should cover the drug, and a final decision isn’t likely until at least the spring. For now, Medicare is deciding on a case-by-case basis whether to pay for Aduhelm.

Sanders asked Biden to order Medicare to hold off on approving coverage of Aduhelm until there is scientific consensus about its benefits.

Biogen has defended its pricing, saying it looked carefully at costs of advanced medications to treat cancer and other conditions. A nonprofit think tank focused on drug pricing pegged Adulhelm’s actual value at between $3,000 and $8,400 per year — not $56,000 — based on its unproven benefits.

7 Fintech Stocks That Will Continue To Disrupt Traditional Banking

In April 2021, JPMorgan Chase CEO Jamie Dimon described fintech companies as one of the “enormous competitive threats” to traditional banking. And with good reason. Fintech (short for financial technology) is not just “digital banking.” It’s a different approach to banking that traditional banks will not be able to replicate by outspending their competitors.

You see, cryptocurrency is getting a lot of attention for the way it’s disrupting the monetary system. But before there was bitcoin (CCC: BTC-USD), there was fintech.

What started out as a way to send money from one person to another without the need for a bank (i.e. peer-to-peer lending) has morphed into much more. Today, individuals and businesses can get loans, invest, and pay bills conveniently and securely. And they can do so without ever having to set foot into a bank.

Financial technology is democratizing finance for many individuals who have been left behind by the traditional banking system. The “unbanked” is a huge target audience. But whereas fintech started as reaching those that were unbanked out of necessity; it is cultivating a new audience among those who are going unbanked by choice.

In this special presentation, we’ll look at seven fintech companies that are leading in this space today and will do so well into the future.

View the “7 Fintech Stocks That Will Continue To Disrupt Traditional Banking”.