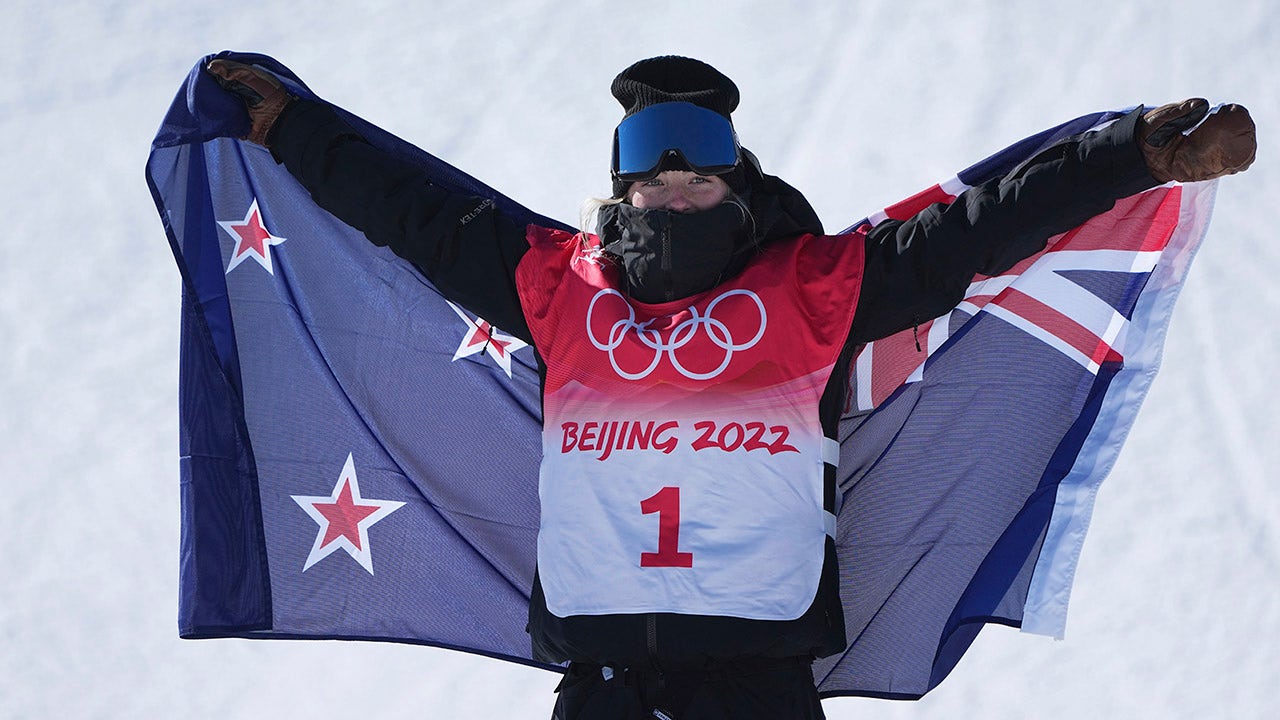 The land of the long white cloud has its first gold medal in Winter Olympics history.

Zoi Sadowski Synnott of New Zealand threw down a thrilling run on her last trip down the Secret Garden Olympic Slopestyle course on Sunday to claim the gold medal for her island nation.

“Greatest run of my life,” said the 20-year-old Sadowski Synnot, an Australian-born shredder with an American mother and a Kiwi father.

They moved to Wanaka, on New Zealand’s South Island, when she was 6.

New Zealand is best-known for its beloved All Blacks rugby team and even for being home of sailing’s America’s Cup. But it also has mountain resorts, including near where Sadowski Synnot lives, making it one of the top destinations in the Southern Hemisphere for snowboarding and skiing.

She attacked the supersized course with a challenging, progressive run despite hardpacked snow and bone-cold wind chills that made it hard on most of the 12 finalists. That included two-time defending champion Jamie Anderson, who finished ninth.

She landed a double-cork 1080 on the second-to-last jump, including a solid grab of the middle of the board that she held for more than long enough for the judges to see clearly. And then she repeated the double cork in a different direction, the way she did in her victory at the Winter X Games last month when she became the first woman to pull it off.

Sadowski Synnott raised her hands in the air after landing and was tackled in celebration at the finish line by Marino, who won silver, and bronze medalist Tess Coady of Australia.

Chinese teenager Su Yiming went with a big trick early and was the surprise leader in the men’s slopestyle qualifying round.

Throwing a triple cork, the kind of trick most riders save for the finals, Su finished with a score of 86.80. It topped his idol, Mark McMorris of Canada, and defending Olympic champion Red Gerard, who also both advanced to Monday’s final.

The 17-year-old Su clapped his hands in excitement after finishing his first-round run as a sparse audience in the stands cheered. Su won a big air competition in Steamboat Springs, Colorado, in December. His best slopestyle finish on the World Cup circuit was sixth on New Year’s Day.

Gerard wound up fifth in qualifying and McMorris second. The top 12 riders moved on.

The men’s downhill, the first event of the Alpine skiing schedule, was postponed because of strong wind that made it too dangerous to race at the top of The Rock, the speed course at Yanqing Alpine Skiing Center. The wind was gusting at 40 mph at the scheduled starting time. There were three delays before it was finally called off.

The men’s downhill was rescheduled to Monday, when the first women’s race, the giant slalom, is to be held.

“I would love to ski today, but I would not love to ski in unfair conditions,” said Aleksander Aamodt Kilde, a Norwegian who leads the World Cup downhill and super-G standings and was fastest in Friday’s second training session. “The wind here is a big, big challenge. And it’s a pity, because you have good weather, you have good snow, you have a perfect slope. We just have to stay patient and do the best.”

Mikaela Shiffrin of the United States will be defending her 2018 Olympic gold in the giant slalom on Monday. She is dating Kilde.