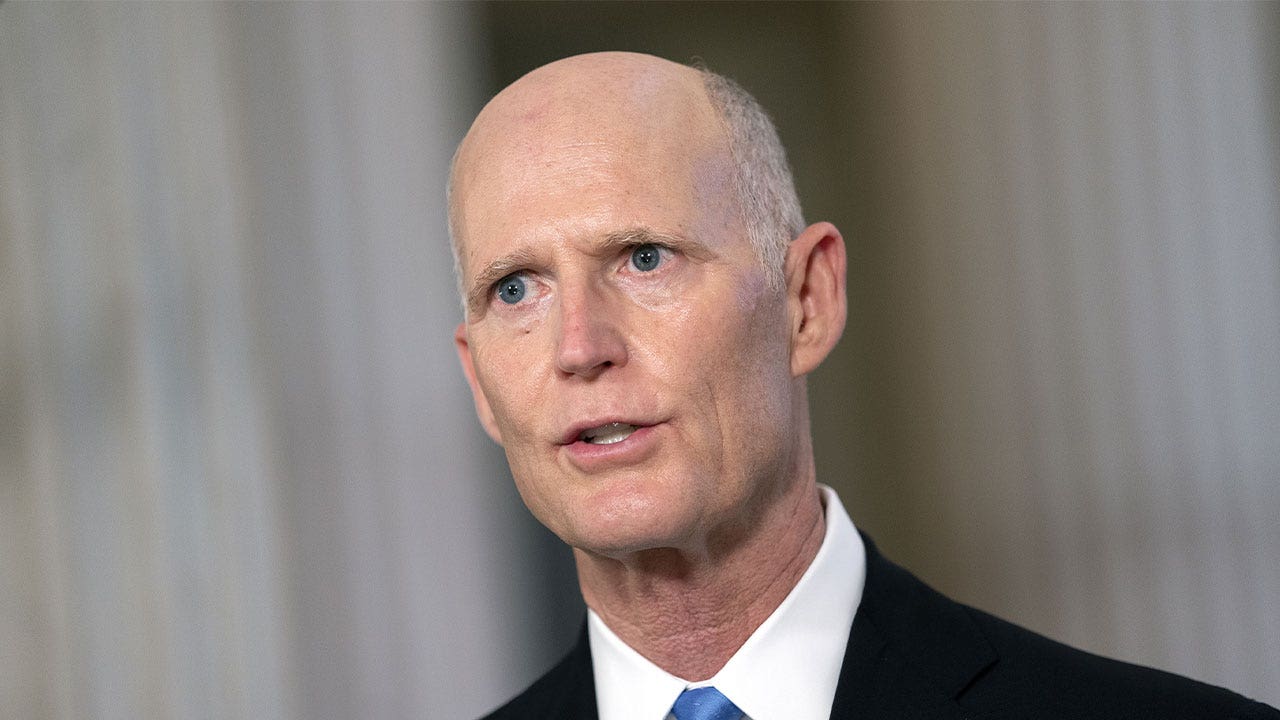 Sen. Rick Scott, R-Fla., said Sunday that Americans should be “furious” with the way Democrats are handling their money and that President Biden’s Build Back Better agenda will only worsen the country’s “ridiculous” inflation and send it further into debt.

During an appearance on “Fox News Sunday,” Scott told host Chris Wallace that Democrats are still debating their multi-trillion-dollar spending bill while doing nothing to address the skyrocketing inflation that will only be worsened by more government spending.

WASHINGTON, DC – OCTOBER 27: Sen. Rick Scott (R-FL) holds up an article from the Sun Sentinel as he speaks alongside other Republican Senators during a press conference on rising gas an energy prices at the U.S. Capitol on October 27, 2021 in Washington, DC. Republicans are placing blame on the Biden Administration for the quickly rising gas prices this year as predictions estimate that heating costs this winter will rise significantly as well. (Photo by Samuel Corum/Getty Images)

“If you look at what they’re talking about with this — name whatever the bill is — all it’s going to do is cause more inflation,” he said. “Look at what it’s doing to poor families in this country, with gas prices up 55%. Go to the grocery store, food prices are up. It’s all caused by government spending. And by the way, if you look at inflation, the border, parents’ involvement in schools, our military support, there is nothing that Democrats are talking about doing that solves a problem that Americans care about.

“Solve it, fix it. They have no fixes in this administration,” he added. “They’re like commentators, ‘Yeah, we’re gonna have a problem through next year.’ No, go solve the problem.”

Scott explained that he voted against the bipartisan infrastructure bill, another piece of Biden’s agenda that passed the Senate with the help of 19 Republicans, because it wasn’t fully paid for and didn’t do enough to improve actual infrastructure.

WASHINGTON, DC – OCTOBER 26: Sen. Rick Scott (R-FL) gestures as he speaks during a press conference following the Republicans Policy Luncheon at the U.S. Capitol building on October 26, 2021 in Washington, DC. Democrats continue to negotiate within their party as they try to get the major parts of President Joe Biden’s legislative agenda through Congress. (Photo by Samuel Corum/Getty Images)

“You put a bill in front of me that’s going to be roads, bridges, airports and seaports paid for, I’m very interested in doing something like that,” he said. “But I am not going to bankrupt this country. This country has almost $30 trillion worth of debt. That bill by itself was a quarter of a trillion dollars of debt. This has got to end. This is causing inflation. I mean, this is hurting the poorest families, this is not hurting the rich. It’s hurting families like mine growing up that had to struggle to put food on the table with this is ridiculous inflation. Solve that.

“We’ve got to live within our means, like every family does,” he added. “The amount of waste is staggering. Americans should be furious with the way money is spent in the Senate and in all Congress.”

Scott, who chairs the National Republican Senatorial Committee (NRSC), said he’s confident Republicans will win back the Senate next year because Americans are getting fed up with Biden’s “crazy radical socialist agenda.”

“Do logical things,” he said. “Secure the border, balance a budget, watch how you spend money, cut taxes, this is what Americans want. They don’t want this crazy radical socialist agenda that the Biden Administration has come up with. It makes you mad what’s going on in this country.”

“Why are people gonna vote with us? They want a secure border. They want parents involved in schools, they want to fund the police. They don’t want this ridiculous inflation,” he added.

Scott made a similar argument in an opinion piece last week for Fox News, citing a poll by the NRSC that found that suburban voters, by “significant majorities,” reject Democrats’ “attacks on American energy, their focus on critical race theory and other radical curriculum, the open borders and amnesty agenda that is fueling a crisis at our Southern Border, and a radical social agenda that allows biological males to play in women’s sports.”