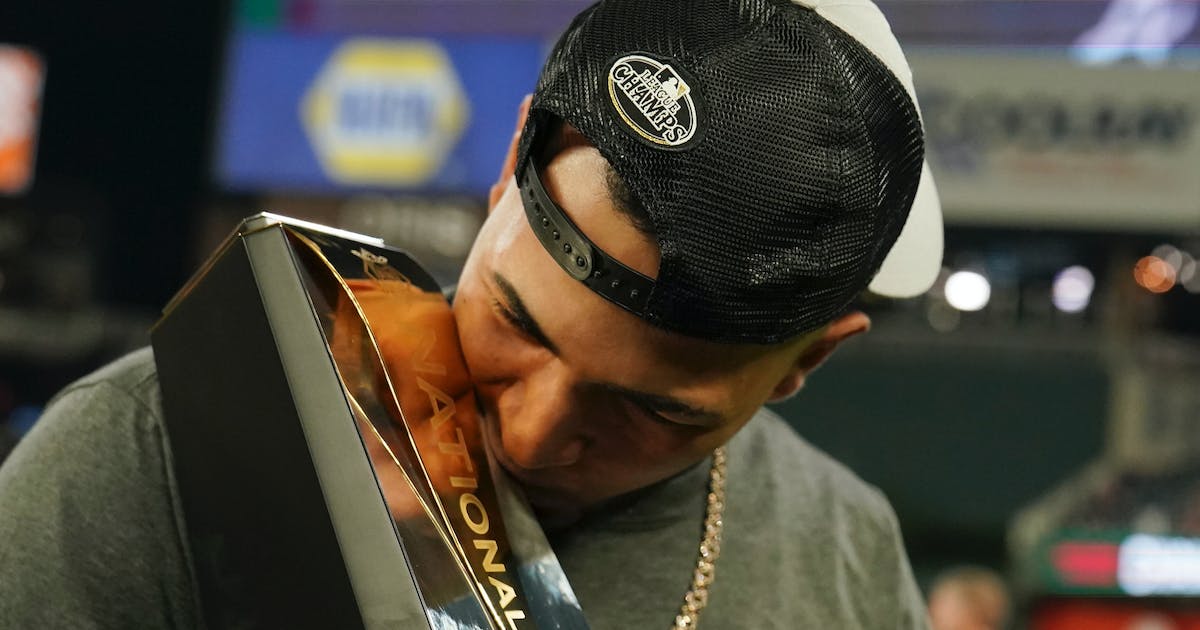 The Twins’ seven-player presence in the Arizona Fall League in 2013 included Byron Buxton, Max Kepler and Eddie Rosario. Buxton was thetop prospect as a 19-year-old and in center field. The right side of the infield was Rosario at second base and Kepler at first.

This was the first look at Rosario and his speed, both afoot and with a bat, was impressive.

Then, it was announced in January that he had flunked an MLB drug test while in Arizona and would serve a 50-game suspension to start the 2014 season.

The actual substance was never revealed, although rumor had it being marijuana. What the suspension did was delay Rosario’s ascent in the Twins organization.

“I had Eddie in high-A at Fort Myers in 2013,” said Doug Mientkiewicz, the former Twins first baseman who later became a manager in the Twins minor leagues. “Miguel Sano and Kennys Vargas were here at the same time.

“They always took batting practice together. Never saw three guys who had so much fun getting under each other’s skin in batting practice. When they would get Eddie mad, you would see nothing but rockets.”

Rosario and Sano were promoted to Class AA New Britain after 50-some games. Sano missed the 2014 season with Tommy John surgery on his right elbow. Rosario was sent back to Fort Myers after his suspension concluded near the end of May.

“I had him for eight games before he was promoted,” Mientkiewicz said. “He didn’t belong in A-ball. He probably belonged in Triple-A by then. The thing with Eddie always has been, he has to be challenged.

“The way to get the best out of Eddie is to tell him that he can’t do something. He will do everything in his power to prove you wrong.”

Rosario put in five-plus seasons in the Twins outfield and could have won $11 million to $12 million in arbitration after the 2020 mini-season. Instead, the Twins did not offer him a contract and he became a free agent.

The Twins and 29 other teams were telling Eddie they did not consider him an eight-digit player. Cleveland wound up signing him to a one-year, $8 million deal.

Rosario had some injuries and didn’t produce in Cleveland. On July 30, Cleveland traded him to Atlanta for Pablo Sandoval and cash. Sandoval was released a few hours after the trade.

Two years after hitting 32 home runs and driving in 109 runs for the Twins, the message now to Rosario had become: “We’ll give you away to save $2.5 million.”

Mientkiewicz was in Florida this week, helping coach a high school football team, out of baseball, but both thrilled and unsurprised to watch what Rosario has done as a leader in Atlanta’s underdog run to the World Series.

“This was the perfect storm for Atlanta; maybe the best thing to happen to the Braves in a roundabout way,” Mientkiewicz said. “You never can say it’s good to lose Ronald Acuna Jr., but with the outfield injuries, two of the players the Braves brought in were Eddie and Joc Pederson.”

Pederson was in the organization when Mientkiewicz was a Dodgers minor league coach a decade ago.

“They are built the same way,” he said. “Their heartbeats slow down rather than speed up in big situations.”

The Braves made it past Milwaukee, with its excellent pitching and feeble hitting, in four games in the NLDS. Then came the Dodgers, defending champs, missing a couple of pieces, but still a loaded team with an overwhelming bullpen to finish games.

Thus challenged, here came Rosario the Magnificent: three home runs, nine RBI and 14 hits in the series, and most of all, putting the Dodgers on the skids with that three-run rocket to right in the decisive Game 6.

Before that, there was the clutch hitting and baserunning that gave Atlanta a comeback victory and a 2-0 lead in the series. The Braves were down 4-2 in the eighth, Eddie was on first, and he tagged up and made it to second on a routine fly ball to left.

They scored twice to tie it, then won it on Rosario’s game-scoring single.

Paul Molitor, Rosario’s first Twins manager, was texted about Eddie’s tag-up. He responded: “Eddie’s risk/reward computations are different than most. No-blink player, and he came out smelling like a Rosie.”

Pitcher Glen Perkins once told me that Eddie — with his bring-it-on view — was his all-time favorite teammate. Asked about amazing succession of rockets, Perkins responded:

“Eddie sees either a beach ball or a golf ball. There is no in-between. Right now, it’s a beach ball.”

The 14 hits tied the record for a postseason series, except Rosario’s 14 came in six games and the others in seven. He already has the hardware as the MVP of the NLCS, and starting Tuesday night, there’s a World Series trophy to pursue.

“Eddie hasn’t been chasing,” Mientkiewicz said. “When he stays in the zone, he’s as good as it gets.”