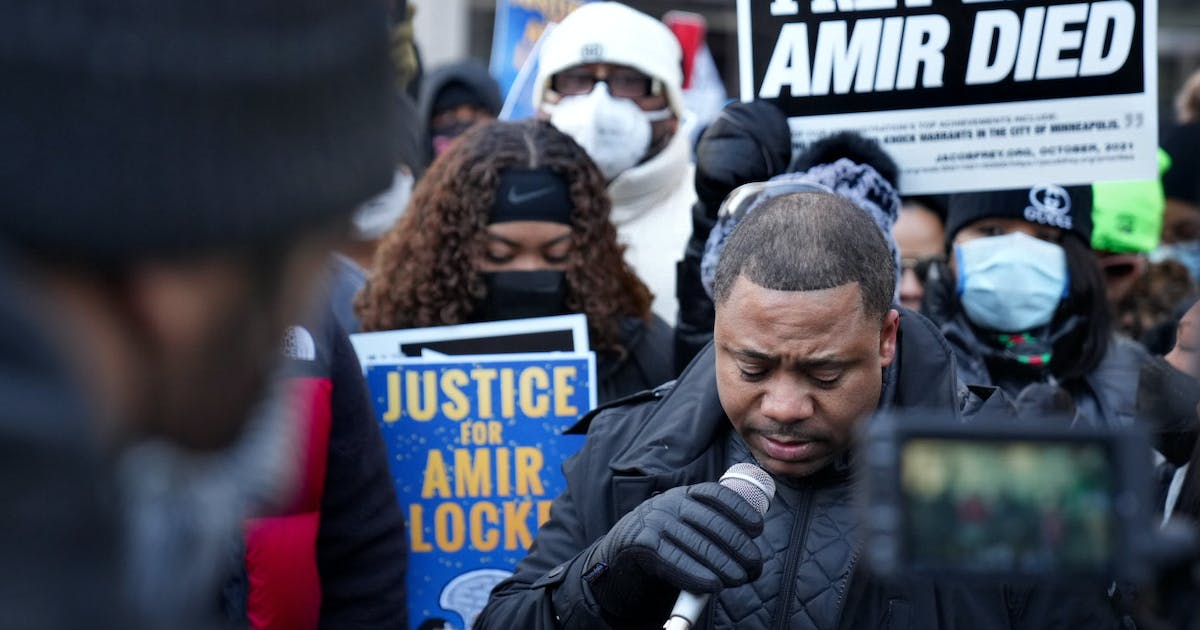 Across Minneapolis, the sense of deja vu was palpable.

Three days after a Minneapolis police officer fatally shot 22-year-old Amir Locke while executing an unrelated search warrant, the city found itself once again mired in a bitter conversation about race, policing and no-knock warrants. The moment — the grieving, the outrage, the questions — exacerbated feelings of dread and exhaustion in a place that has been trying to rebuild and reform itself since the police killing of George Floyd in 2020.

“It’s just so tragic and unnecessary and continues to happen,” said Allison Schutte of Plymouth, who bundled up with her husband and three young children for a Saturday afternoon protest of Locke’s death in the bitter cold.

Hundreds gathered Saturday outside Minneapolis City Hall and the Hennepin County Government Center with signs and chants calling for the firing and prosecution of officers present for the shooting, the resignation of Mayor Jacob Frey and a permanent ban on no-knock warrants.

“I’m hurt, devastated,” said Bernadette Gillum, 62, who has lived in north Minneapolis for 30 years. “I am so ready to leave the city. I’m afraid here — not only for me, but anybody of color.”

She stepped off the bus at the corner across from Bolero Flats, where Locke was killed in a relative’s apartment. Someone had painted his name across the façade of the Minnesota Orchestra building.

Locke was sleeping under a blanket on a couch just before 7 a.m. Wednesday when a SWAT team burst in yelling, “Search warrant!” An officer kicked the couch, Locke stirred, holding a firearm in his right hand, body camera footage shows. He was shot by officer Mark Hanneman, with the entire sequence unfolding in seconds.

A hush fell over the large crowd gathered Saturday as Locke’s father, Andre Locke, spoke about the deep sorrow he felt in reading the police department’s initial statement about the shooting, which repeatedly referred to his son as a “suspect” despite the fact he was not named in the warrant.

In November 2020, Frey and then-Minneapolis Police Chief Medaria Arradondo announced they would restrict the use of no-knock warrants, and that police would have to identify themselves as “police” executing a search warrant before entering any home, regardless of whether a judge gave them permission to enter unannounced.

“Outside of limited, exigent circumstances, like a hostage situation, MPD officers will be required to announce their presence and purpose prior to entry,” Frey’s office said in a statement at the time.

Subsequently, Minneapolis police continued to apply for and obtain no-knock warrants even as the mayor touted having ended their use on campaign literature disseminated before the November election.

In the past month, the police department obtained more than a dozen no-knock warrants — more than the number of standard warrants issued — according to a Star Tribune review of court records. St. Paul police initially applied for a standard search warrant for the apartment unit where Locke was sleeping, but they were forced to resubmit the request after Minneapolis police insisted on a no-knock operation, according to sources.

In an interview Saturday, the mayor sought to distinguish between “applying for” and “executing” warrants, claiming, “We don’t have a single instance where a warrant was executed without announcements, even when a no-knock or no-announce warrant was issued” because the supervisor on scene is required to log how the warrants were served.

Frey said he had not watched any body camera footage to verify whether officers announced themselves prior to entry, and he did not answer why the police department continued to apply for no-knock warrants at a higher rate than standard warrants if they are not allowed to be executed in most circumstances.

Frey said he is not alerted when a judge issues a no-knock warrant to Minneapolis police.

Hillary Rancap, a 26-year-old Target employee, said she couldn’t help putting herself in Locke’s shoes when she learned he had been killed in her old apartment building. She worried about the impact on downtown’s residential community, already on the defensive from perceptions that the area is dangerous.

“It’s going to affect whether people want to live here,” she said. “I live downtown and I like it, but a lot of people don’t. And it’s going to make it even worse.”

The protesters marched to the police department’s First Precinct on Hennepin Avenue and S. 4th Street before heading back to the Government Plaza, where cars blocked the light rail tracks. A few people spray-painted Locke’s name on downtown buildings.

Drums provided a steady thumping soundtrack. Kimberly Wooster, who volunteers as a medic at George Floyd Square on 38th and Chicago, carried a box of hand warmers and children’s masks that she was handing out for those who needed them. Learning of Locke’s death was “utterly heartbreaking,” she said.

“I’m not going to stop fighting for equality and basic civil rights,” she said.

Adrian Wilson, 33, lives a few blocks from where Floyd was killed and filmed much of the aftermath. He attended the Saturday protest holding his 5-year-old son.

Floyd’s death “opened my eyes to the city that I live in,” said Wilson, a native of the Caribbean who moved to the United States with his mother as a teenager.

“As a Black man, we’re the most endangered species in the country. We blink and we’re dead,” he said. “The best we can do is come out, show numbers, fight and survive.”

He wasn’t hopeful for change. “What do you think? It’s been 400 years,” he said. Floyd died two years ago, he added, “and we haven’t seen any change yet.”

Carlos Zuniga, 22, and his friend Logan Jones joined the protest “to raise awareness to what’s going on,” he said.

“There seems to be no end in sight,” Zuniga said. “We’re trying our best. We’re out here in the cold.”

“It’s frustrating,” he added. “It’s been going on for so long. It gets kind of numbing.”