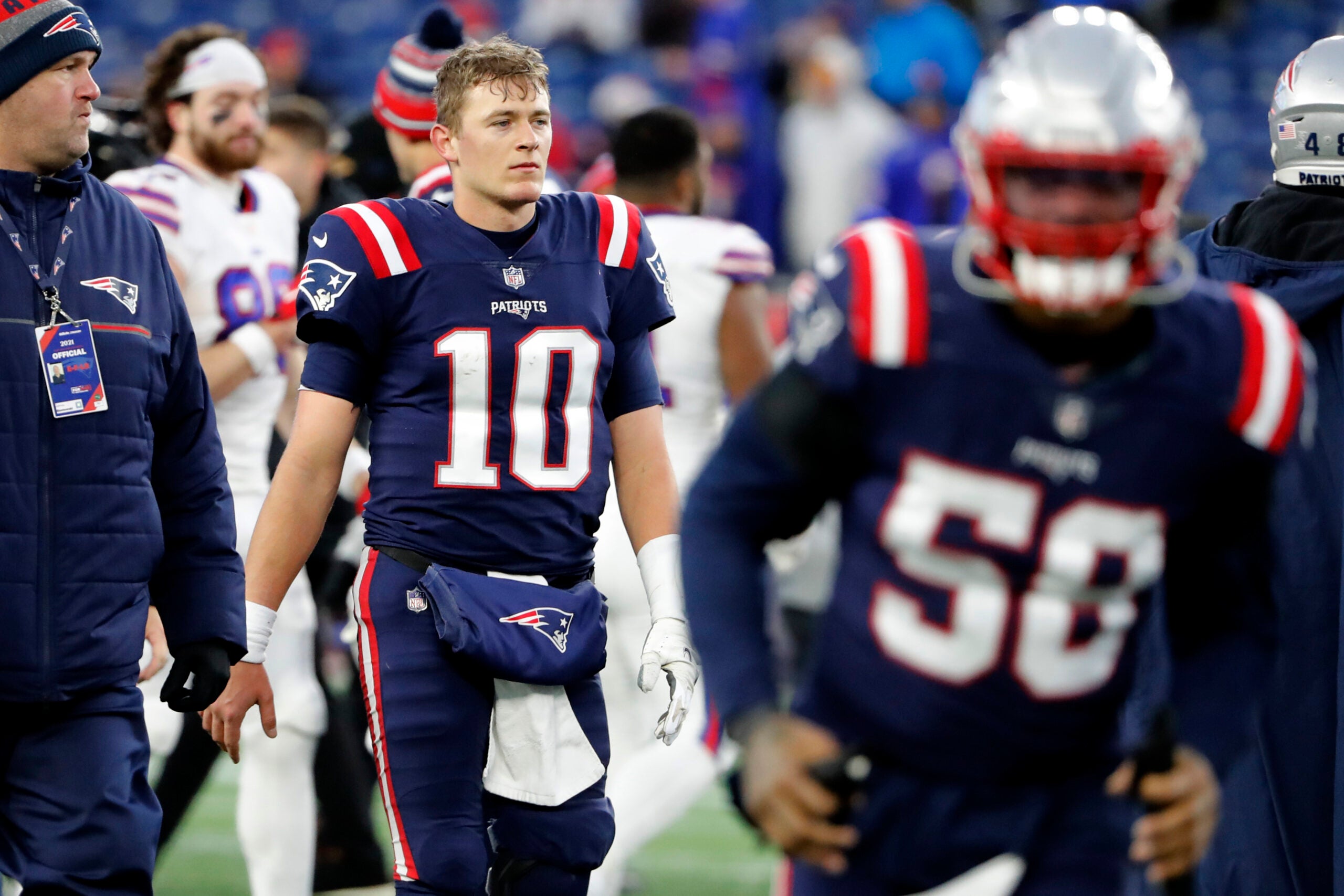 Sunday’s game between the Patriots and Bills was pivotal — perhaps one of the most impactful games remaining on the NFL’s schedule entering Week 16.

After falling 33-21 in their second disappointing performance in a row, the Patriots know they let a golden opportunity slip away to clinch playoff positioning and to put a stranglehold on the AFC East. A win would have given them a two-game lead and the tiebreaker over the Bills with two games remaining. The loss evened them with the Bills in the standings and handed the Bills the tiebreaker.

“It’s our own fault,” Patriots center David Andrews said. “There’s no one to blame except for us, but that is what it is. We can’t change it now. We have to go back to work tomorrow.”

A common theme among the Patriots was a need to execute better (and talk less).

“We just have to practice a little bit better,” Kyle Van Noy said.

Van Noy seemed to realize that he was setting himself up for controversy like Mac Jones a week prior, because he quickly added: “I’m not saying practice was bad. Just have watch a little extra film here and there and tweak some things and just play better.

“I could sit up here and talk all day about yada yada yada but at the end of the day, we just have to go produce. Talk less and play more.”

“The time for talking is just — you talk and talk. We have to execute, and we have to be better,” he said. “So that’s really what it comes down to, not some pump-up speech or talk. It really just comes down to execution, and we didn’t do a good enough job of it today.”

– Jones seems to have learned from his mini-controversy after his practice comments last week. When asked what he thought about the team’s practice this week, Jones deflected.

“I’m not going to really talk about the past,” he said. “I think what we do on Sundays is what matters. I didn’t perform very well today. All we have is the opportunity to get another week of practice to try and play well on Sunday again, so that’s all there is to it.”

Jones said he was disappointed in his accuracy after finishing 14-for-32 with 145 yards and two interceptions.

“You can’t have successful plays when your quarterback’s not doing the right thing, so I have to play better and get the ball to the people that need to get the ball,” Jones said. “There’s no excuses. …

– The Patriots were uncharacteristically sloppy, picking up several costly penalties.

One was a taunting call against Andrews. After the game, referees told a pool reporter they had the situation under control before Andrews got in the face of a Bills player defending Jones.

Devin McCourty added that penalties always seem to come back to bite the Patriots.

“We talk about it, every team in the NFL talks about it,” McCourty said. “But it’s getting it done each time it shows up, not just in this critical situation. Each time, just being disciplined enough to not get a penalty. …

“I think some of those penalties these past couple weeks have hurt us and we just have to be prepared now that that’s happened, it’s going to get called close for us. It just is what it is. when they watch the film, these things have happened. We have to be alert to refs calling it close for us, and just walking away and being smart.”

– Damien Harris missed two weeks with a hamstring injury, but he scored all three of the Patriots’ touchdowns and rushed for 103 yards on 18 carries.

“Just having the opportunity to step back onto the field with those guys felt great,” Harris said. “Obviously, the outcome wasn’t what we wanted it to be, but just being able to be back out there felt great and looking forward to coming back in here ready to go back to work and be ready for next week.”

– Jakobi Meyers was asked if the Patriots are ready for two critical contests that will decide the team’s postseason positioning.

“Everybody is doing their best job. I believe in our locker room, and I believe we have a lot of talented players. As long as everyone comes in and is the best version of themselves, I think we’ll be all right.”

Still, McCourty wanted to make it clear that the Patriots have a lot of work to do.

“It’s up to us as a team for what’s left of the season,” he said. “We’re guaranteed two more games and that’s it. That’s how we have to approach it. That’s the mentality and mindset we need to have. If not, this season won’t end the way we want. …

“We’ve been in seasons where we’ve talked about each game left is like a playoff game. We have to play like that. That’s where our season is. I don’t know where we stand now, where it all stands and everything, but if we don’t finish the way we want to finish, we’ll be at home.”