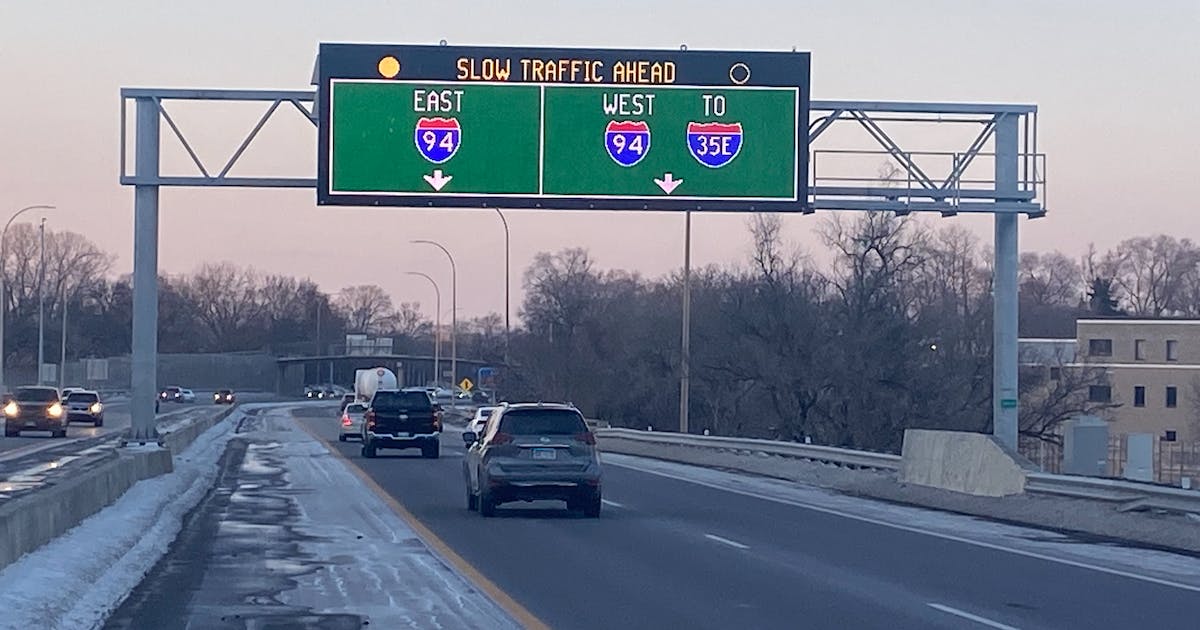 Motorists on northbound Hwy. 52 have a new electronic sign to warn them about congestion and delays on the Lafayette Bridge, where crashes have increased four-fold since the bridge on the east side of downtown St. Paul was rebuilt seven years ago.

The sign near the Concord Street exit went live Jan. 28 and is also aimed at getting drivers to choose the correct lane long before arriving at the confusing intersection where Hwy. 52 ends and drivers must turn right onto E. 7th Street or take ramps leading to Interstates 94 and 35E, said MnDOT Metro District Engineer Melissa Barnes.

MnDOT rebuilt the bridge between 2012 and 2015 to replace an aging structure. As part of the rebuild, the agency expanded the bridge from two to three northbound lanes and made changes to ramps leading to I-94 and I-35E.

That also meant changes in lane assignments leading to the freeways and 7th Street. With the current layout, motorists accessing eastbound I-94 use the far left lane. Drivers previously used the far right lane. Motorists going to westbound I-94 and northbound I-35E make a right turn by getting in the center lane. The movements are not intuitive for many motorists.

Before the new bridge, MnDOT records showed 73 crashes on the segment between Plato Boulevard and the I-94/7th Street interchange. That compares with 290 in 2017-2018, two years after the new bridge opened.

“We know we have problems out there,” said MnDOT spokesman Kent Barnard.

In 2020, MnDOT updated pavement markings on the Lafayette Bridge by extending double white lines on the north bend of the bridge 650 feet so they appear sooner than in the past. By law, drivers are not allowed to cross double white lines.

The new sign — much further upstream — is another attempt to eliminate bottlenecks and last-second merging, and “give drivers a heads up much sooner,” Barnes said

Sensors on the bridge will measure traffic speeds. When slow traffic is detected, the electronic sign at Concord Street will activate to warn them. Queue warning systems, as they are called, have been used extensively in work zones, but this is the first permanent application of such a system, Barnard said.

MnDOT last month launched a study to further investigate what the agency could do to make things better. The study is the first step in a long process to come up with an alternative design to reduce queuing, high crash numbers and recurring delays that happen on the bridge and ramps.

The study is hardly trivial, Barnes said. It will include a traffic analysis, an environmental impact assessment and feedback from adjacent landowners and motorists who use the corridor. And most importantly, it will identify costs. MnDOT right now has no money to make any fixes.

“We have to do this if we are ever going to build something out here,” Barnes said.