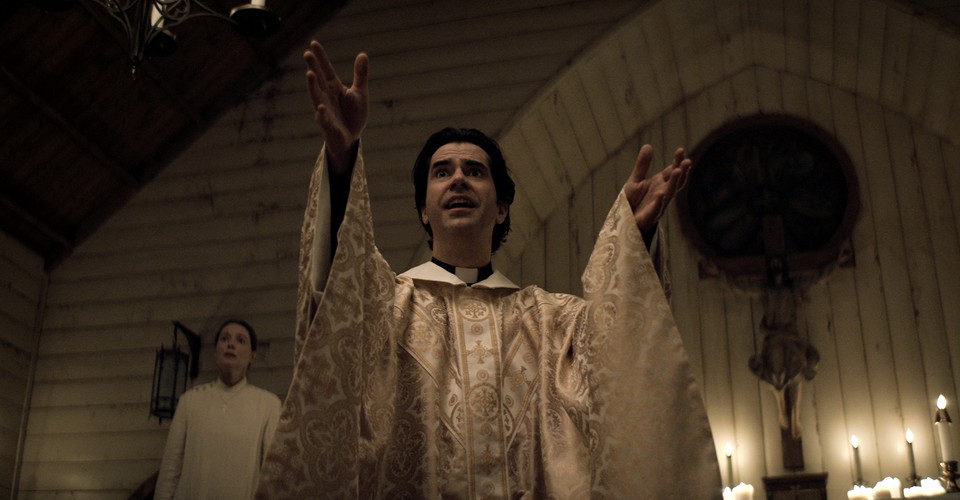 This story contains spoilers for the Netflix series Midnight Mass.

The Exorcist is a film I’ve long loved because it raised the bar not just for horror, but also for movies that explore questions of faith and doubt, good and evil, life and death. I know all of its beats by heart, but when I recently rewatched the 1973 classic, the ending hit differently. The movie concludes with an exorcism, naturally. Chris MacNeil has brought her daughter, Regan, to a host of medical professionals in a desperate attempt to save her from what turns out to be a demonic possession. But the only person who can save the girl, it seems, is a priest. The camera lingers on the mother’s exhausted face as two priests close the door to her daughter’s bedroom and go to work.

This is a trope in supernatural horror. Catholics, and priests in particular, signal to both characters and audiences that true evil is afoot—then they defeat it. This dynamic has troubled me more and more over the years, as a born-and-raised and still-practicing Catholic, and as a religious-studies scholar. In light of new details about real-life horrors such as clerical sex abuse and the colonial violence of residential schools, the dissonance of seeing priests portrayed primarily as genre heroes is striking. What about a horror movie where the Catholic Church supplies not the good guys but monsters? This sort of story would speak a necessary truth and deliver a morally urgent message about the dark side of faith.

Then I came across the Netflix limited series Midnight Mass, released late last month. Set in a fishing community on a small island, the show centers on the miraculous and ominous events that take place after a young priest arrives to tend to the town’s only church. The attention to religious detail is astounding, and is neither accidental nor incidental to the story itself. The creator, writer, and director, Mike Flanagan, has reflected on how “deeply personal” the show’s horror is to him. Much like the protagonist Riley Flynn (played by Zach Gilford), Flanagan was raised Catholic and served as an altar boy. Midnight Mass is religious horror that treats its subject with reverence while, at the same time, offering one of the most thoughtful and thorough critiques of religion you’re likely to encounter in popular culture.

Read: 25 of the best horror films you can watch, ranked by scariness

The series touches on many themes, but its terror is grounded in the violence and cruelty of its religious characters. The charismatic Father Paul Hill (Hamish Linklater) is unwittingly a conduit for evil. We learn in Episode 3 that he is actually Crockett Island’s elderly Monsignor Pruitt, who was believed to have fallen ill after a pilgrimage to the Holy Land. Father Paul tells the congregation that he’s the monsignor’s replacement, knowing they wouldn’t believe the truth: that he encountered a winged monster on his travels that drank his blood, then fed him its own blood to restore his health and youth.

Where viewers might see a vampire, the priest sees “an angel” and a way to work miracles in his hometown, so he brings it back with him. He laces the church’s Communion wine—which, for Catholics, is the actual blood of Christ—with monster blood, and we watch as the old grow young, as sight is restored to the bifocaled, and as a teen girl gets up from her wheelchair and walks. There’s a catch, though. If you happen to die, you come back to life with an insatiable bloodlust and a fatal relationship to light. This comes to a climax during the midnight service on Easter morning when first the church and then the entire town consumes itself. Literally.

Midnight Mass also lays bare the mundane maliciousness of religious exclusion, embodied most keenly in Bev Keane, the self-appointed lay administrator of St. Patrick’s Church. Courtesy of a harrowing performance by Samantha Sloyan, Bev brings to life the callousness of people who view everyone around them with judgment and condemnation. She plays no small part in propelling her pastor and a number of parishioners to commit atrocities, and call them right and just.

The creators insist that the show isn’t intended to be anti-Catholic or anti-religious. Flanagan has written that he’s long contemplated questions about “how fundamentalist thinking could permeate and corrupt any belief system … How easily faith could be weaponized against the faithful.” This is a common reading of the series—that it isn’t a critique of religion so much as a critique of religion gone wrong. This interpretation is reinforced in the last two episodes. Horrors ensue as some parishioners drink from poisoned plastic cups and are reborn as vampires. Others, refusing to do so, become food. This seems to draw a hard line between “good” and “bad” religion, as does Monsignor Pruitt’s redemption in the end.

But this limited reading doesn’t do the series justice. Carefully cordoning off its criticism to only “cults” or fanatics is a mistake and allows well-meaning religious people to avoid self-reflection and perhaps feel more comfortable with the series than they should. (And I’d include myself among them, though I’d certainly be on Bev Keane’s chopping block.) This is precisely what the word cult does in the first place: Religious-studies scholars have argued that the label works to shield so-called mainstream religions from justified criticism. Instead, the show illustrates the insidious dangers that can arise from seemingly “good” religious communities.

I agree with the creators. The series is neither anti-Catholic nor anti-religious in the narrow, bad-faith sense that those terms imply. Nevertheless, Midnight Mass offers an essential critique of Catholics, the Catholic Church, and religion more broadly. It succeeds at this not despite, but because of its careful and caring portrayal of the religious lives of Crockett Island’s Catholics. The show is at its most incisive when it illuminates how frighteningly close otherwise ordinary priests and parishioners are to indescribable horrors.

The series is daring enough to dwell on how miracles and monsters go hand in hand. Whether or not it was intentional, scattered throughout its seven episodes are glimpses of the logic, choices, and actions that drive real-life Catholic horror—even if sexual abuse, racist violence, and cultural genocide aren’t directly addressed at any point. Catholics don’t hold a monopoly on any of these evils. But that doesn’t mean that they are anomalous or irrelevant for understanding what it has meant to be Catholic, institutionally and individually.

As experts have argued, there are distinctly religious dimensions to violations committed by Catholics, and Midnight Mass hints at its edges. The most chilling instance of this is the line Bev Keane delivers as she encourages others to aid and abet the priest’s monstrosity. “The man who acts presumptuously by not obeying the priest who stands to minister there before the Lord, your God,” she says, quoting Deuteronomy, “that man shall die.” Her words are a reminder of how deference to the male authority of the priest has been historically used to justify both abuses and cover-ups.

The series uses the ritual of Communion to convey how religious communities can build walls between the chosen and those considered outsiders. Not all Crockett residents are Catholic. As the “good” Catholics are transformed and reborn, those who refused Communion are left to fend for themselves. The few heroes still fighting at the end include Erin Greene (Kate Siegel), a domestic-abuse survivor who loses her unborn child midway through the show; the Muslim Sheriff Hassan (Rahul Kohli); and Sarah Gunning (Annabeth Gish), a lesbian doctor who has left the Church. Once again, Bev says the quiet part out loud. “Those who’ve been coming to church and taking Communion, they have nothing to fear tonight,” she announces as she lets loose the vampires. “As for the rest of them … let God sort them out.” The final two episodes could even be read, albeit with some stretching, as an allegory for Christianity’s bloody expansion. The church destroys itself before wreaking havoc on the rest of the world.

To say all this is not to be anti-Catholic. It’s to tell the truth. When faced with the reality of religious violence, the instinct of many Americans is to unquestioningly defend the notion of “good” religion. The Ku Klux Klan isn’t really Christian, we might tell ourselves. We might take comfort in the idea that the white Catholics and evangelicals who joined others in storming the U.S. Capitol weren’t good Christians. But in doing so, we risk ignoring the crimes committed every day in the name of faith. Religious people would do well to reckon with the complicity of their traditions and institutions in the sins of the world. After all, as scholars have shown, the KKK and Christian nationalists, too, think of themselves and their works as good and religious.

Writing on clerical sex abuse, the historian Robert Orsi insists that scholars must recognize “how religion is actually lived in everyday life, with its intimate cruelties, its petty as well as profound humiliations, its sadism and its masochism, its abuses of power, and its impulses to destroy and dominate.” They should be attentive, in other words, to the Bev Keanes and the Monsignor Pruitts and the angel-monsters. Midnight Mass gets this. It’s the first Catholic horror I’ve seen that does.