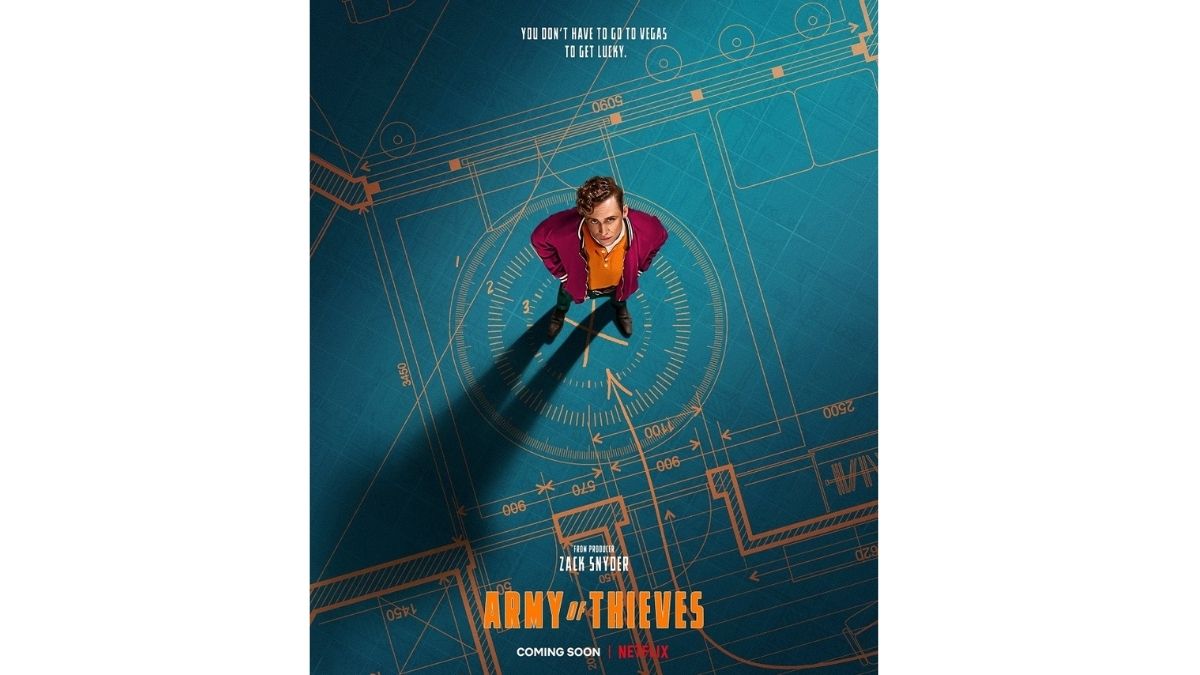 Army of Thieves is a prequel to Zack Snyder’s Army of the Dead that proved to be a bitter-sweet experience for me. The one definitive positive thing that I took home from the film was the hilarious character of Dieter (Matthias Schweighöfer), a thoughtful and delicate German safe cracker who finds himself among a group of men who are dangerously high on testosterone and adrenaline. Army of Thieves introduces us to the humble beginnings of Dieter when he was not Dieter but Sebastian. Sebastian is recruited by Gwendoline (Nathalie Emmanuel), an international thief of repute and skill to crack 4 un-crack-able safes. The safes were built by a legendary Hans Wagner and were conceptualized on the stories, nuances, and themes of Richard Wagner’s epic musical dramas, Der Ring des Nibelungen (The Ring Cycle).

I had a good time with this film. I wasn’t expecting much from it but the film was able to capture my imagination from the very beginning. The primary reason for that was the outrageously hilarious and yet subtle performance of Matthias Schweighöfer as Sebastian. The very first time we see him, it is made abundantly clear that he is completely alone and while he thinks very highly of his own safe-cracking skills, the rest of the world doesn’t even know that he exists. While we know that eventually, he will become a master safecracker in Army of the Dead, it isn’t made clear here if that was already the case thus maintaining a semblance of intrigue. We see him come into his own in the first challenge that he faces where his character is required to open three safes. This sequence plays out wonderfully as we see him move from being someone who has no idea of what was happening to actually winning the challenge.

Once he is recruited, his character is torn between cracking the excruciatingly difficult safes that he must always crack under extreme duress and time constraint and the ever cascading interpersonal drama with Gwendoline that ultimately results in him ending in a spot of immense bother. Matthias Schweighöfer completely sells every aspect of the character. When we see him playing with the safes, we believe him to be someone who is actually wide-eyed with what he is getting to do. The sequences where we see him open the safes and be excited about it also sell his immense excitement at cracking a safe made by Hans Wagner. Similarly in the scenes where we see him trying to get close to Gwendoline but is unable to do so as he is too shaky and is afraid that she will turn him down are exceptionally warm and sweet. Schweighöfer sells these scenes through his expressions and mannerisms alone and that is the reason why they work so well.

We often see him in peril and he is utterly convincing in these sequences and makes us feel the same tension and dread that his character must have been experiencing at that given moment. All these factors add up to make his performance wholesome and also one of the biggest strengths of the film. If your leading man is investing enough to keep you interested in what happens to him in the end, it is always a good thing for the film.

Nathalie Emmanuel as Gwendoline was the next best thing about the film. She is someone who can chew up a scene completely and she puts that aspect of her performance to good use here. Not only is she sensational to look at and investing in the rendering of the character, she strikes up a wonderful chemistry with Schweighöfer to ensure that the exchanges between the two (of which there are many) are always quirky and impressionable.

Schweighöfer is the director of the film too but he knows well when to step back and let Emmanuel steal the thunder from his character. This helps the film’s cause immensely and one can actually feel the synergy of the two roles that Schweighöfer effortlessly executes here.

I also liked the character of Korina (Ruby O. Fee). She was hilarious in some of the sequences and never overstayed her welcome. Unfortunately, that cannot be said about the other two members of the team who were the generic bad guys (atleast one of them was) and started to get on my nerves after a while. The primary anti-hero of the film is also one of the most boring and generic characters that you will ever come across. He ticks all the boxes for being the generic anti-hero and ends up doing nothing that makes him memorable or threatening.

The next aspect of the film that I enjoyed was the heists itself. We have seen some of the most elaborate and meticulously planned heists in film and series over the last decade or so and there is very little that is left to be explored. Even after that, the heists here turn out to be interesting and sometimes even thrilling. While there are numerous unanswered questions and chinks in the armor of logic and believability, the actors ensure that we are invested more in their respective performances and look away from the lapses in the storytelling and logic. The portions where we see Sebastian crack open the safes are rendered beautifully. Each of the safes has a different character and feel to it and we get to see the inner working of them as Sebastian maneuvers his way through them.

The film has pace on its side. Even at a 2 hours plus runtime, it feels breezy. The comedy landed for most of the part and never got too obvious or felt forced. A sense of seriousness was maintained for the sequences that had chases, action, and other edgy situations resulting in those sequences working out better. While there is no novelty in the story and one can practically foresee every twist and turn, the execution and the performances ensure that we have a good time with the film. While this might not impress the heist-genre aficionados, it will surely be a worthy watch for anyone who is looking for some quick and mindless entertainment.

Also read: ‘Dune’ review: A rare epic that gets almost everything right