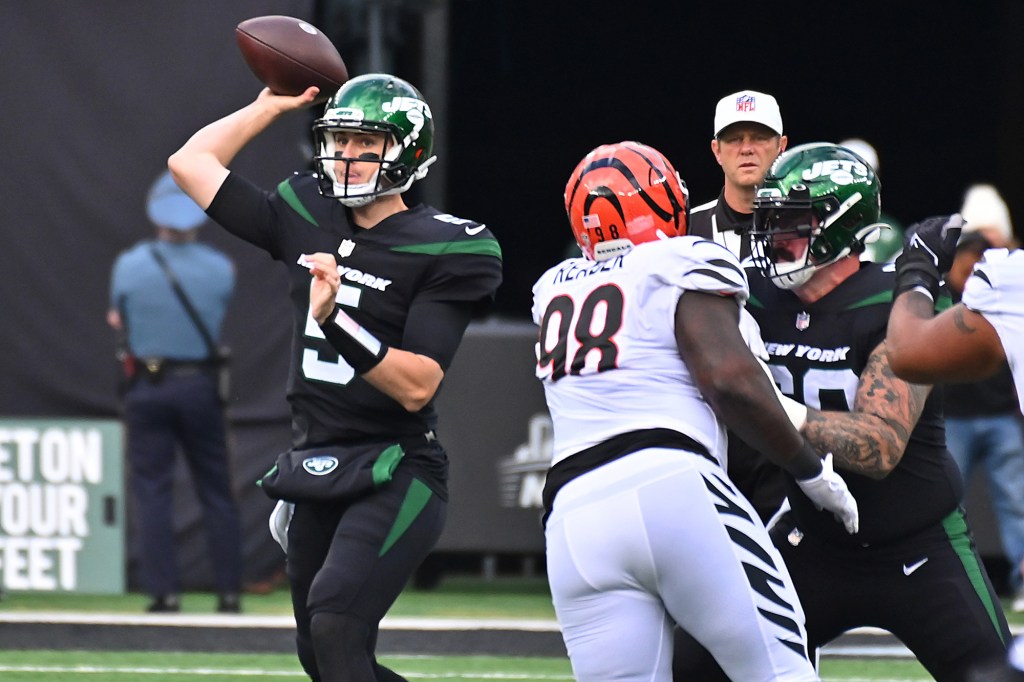 The chant broke out with 3:32 left in the game.

Who would have ever predicted that?

White, the Jets’ unknown backup making his first NFL start, threw for 405 yards and three touchdowns as the Jets shocked the Bengals 34-31 on Sunday.

It was a stunning result after the Jets looked lifeless a week ago against the Patriots and the Bengals entered having handily beaten the Ravens. But White and Co. showed resilience and Robert Saleh’s crew pulled off a stunning upset, coming back from an 11-point deficit in the fourth quarter.

The Jets took the lead late in the fourth quarter after a strong sequence from both the offense and the defense. Trailing 31-20, the Jets cut into the Cincinnati lead with a 19-yard touchdown pass from White to running back Ty Johnson, who tiptoed down the sideline. Johnson was initially called for stepping out of bounds but Saleh successfully challenged the play and it was overturned for the touchdown. After a failed two-point conversion, it was 31-26.

On the next series, Shaq Lawson deflected a Joe Burrow pass and intercepted it at the Bengals 14-yard line with 4:32 left in the game for the Jets’ first interception of the season.

White quickly gave the Jets the lead with a 13-yard pass to tight end Tyler Kroft. The Jets then made it 34-31 with a trick play on the two-point try with receiver Jamison Crowder, taking a flip from Elijah Moore, throwing it back to White.

The Jets’ defense then came up with a big stop. Sheldon Rankins sacked Burrow on third down, forcing the Bengals to punt. The Jets got a huge call with just under two minutes left when the Bengals stopped the Jets on third-and-11 but Bengals cornerback Mike Hilton was called for a helmet-to-helmet hit on Johnson that gave the Jets a first down and allowed them to run out the clock.

Playing in place of an injured Zach Wilson, White became the first Jets quarterback to throw for 400 yards since Vinny Testaverde on Dec. 24, 2000 against the Ravens. White’s final stat line was 37 of 45 for 405 yards, three touchdowns and two interceptions.

The Jets set the tone immediately that this would be a bounce-back game after last week’s embarrassing 54-13 loss to the Patriots. Saleh elected to receive when the Jets won the coin toss, going against deferring to the second half, as he had done all the previous times the Jets won the toss.

The Jets went 79 yards on 10 plays with Michael Carter scoring an 8-yard touchdown to put the Jets up 7-0. It was the Jets’ first score in the first quarter this year. White went 7-for-7 on the first drive and showed great poise. White opened the game completing his first 11 passes.

Offensive coordinator Mike LaFleur who moved upstairs to the coaches’ booth for the first time, called his best game of the season. LaFleur did not put too much pressure on White. He gave him a steady dose of quick passes to start the game and got him into a rhythm early, something he has not done with Wilson this season.

The Jets defense opened the game by forcing a three-and-out and looked like a different unit than the one the Patriots hung 54 points on last week. They were flying all over the field.

The defense came up with a huge goal-line stand after White threw an interception to Jessie Bates. Moore chased down Bates at the Jets’ 1-yard line after a 66-yard return. The Bengals failed to score with Quinnen Williams sacking Burrow on fourth down.

White threw his second interception on the next drive, this one by Bengals linebacker Germaine Pratt off of a deflection from Carter. Cincinnati took over at the Jets’ 15 and the Bengals turned this turnover into points. Joe Mixon scored from the 1 at the start of the second quarter to tie the game at 7-7.

The Bengals took a 14-7 lead with 3:27 left in the first half when Burrow connected with Ja’Marr Chase for a 2-yard touchdown.

The Jets had their third turnover of the game with just under three minutes left in the half when Crowder fumbled at midfield. The Bengals turned that into a field goal and a 17-7 lead.

The Jets got the ball back with 1:45 left in the half and drove down the field easily. It looked like White had found Keelan Cole for a touchdown pass with Cole making an acrobatic one-handed catch. The play, however, was ruled an incompletion after a replay review. Two plays later, White found Braxton Berrios for an 8-yard touchdown strike and the Jets went into halftime down 17-14 despite the three turnovers.

The Jets tied the game at 17-17 with a Matt Ammendola 24-yard field goal in the third quarter. White was hurt on the series after hitting his head on left tackle Chuma Edoga. Josh Johnson entered to complete the drive before White returned on the following possession.

Burrow finally hit a deep shot with a 54-yard pass to Tee Higgins, who split safeties Marcus Maye and Ashtyn Davis. The Jets did a good job of preventing the deep shots for most of the day, but got hurt on this one. Burrow found Mixon for an 8-yard touchdown pass on the following play to go up 24-17.

The Jets’ opening drive of the fourth quarter stalled and they had to take another 24-yard field goal from Ammendola to cut the score to 24-20.

The defense could not come up with a stop after the field goal. The Bengals went 75 yards on 12 plays with Burrow throwing a 10-yard touchdown pass to Tyler Boyd for a 31-20 lead with 7:36 to play.