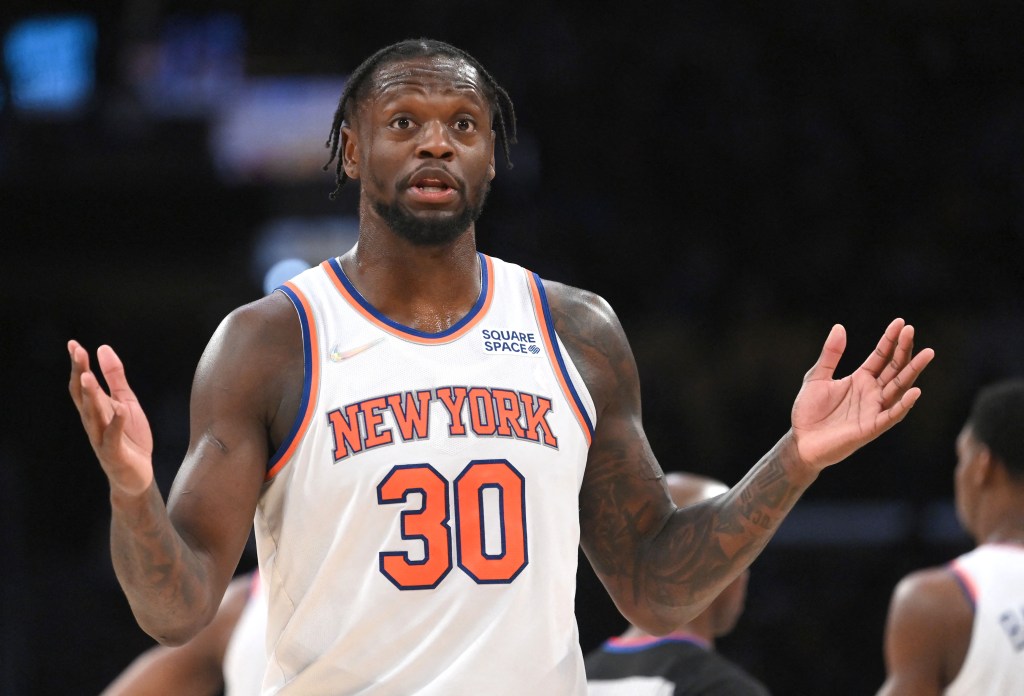 In the spring of 2014, before he became the Lakers’ first-round pick, Julius Randle made it clear how he felt about the prospect of someday ending up on LeBron James’ team.

“I’d rather play against LeBron,” the Kentucky star told GQ.

As it turned out, after the Lakers signed James four years later, Randle was right there to become his teammate. One report said Randle asked the Lakers to make him a free agent, but the team wasn’t interested in giving the power forward a long-term deal to begin with, not with its sights already set on Anthony Davis. Randle would attempt to make it big in the NBA the hard way, signing with New Orleans before taking a chance on the sad-sack Knicks.

So there they were in Los Angeles on Saturday night, when James returned from five games’ worth of knee troubles and landed opposite the ex-Laker on the court and on the TV spot advancing the game. “Randle vs. LeBron” might be one of the sillier promos we’ve ever seen, and yet given the state of the teams involved, it’s all the marketing people had to work with.

But a funny thing happened on the way to the expected one-sided matchup: Randle pancaked James in the first half, playing with a ferocity rarely seen this year as he piled up 20 points, seven rebounds, and six assists. The Knicks held a 21-point lead in the second quarter, and a 15-point lead at the half.

In the end it didn’t matter. The Lakers outscored the Knicks 31-13 in the third quarter, survived RJ Barrett’s staggering dunk and tying 3-pointer in the final seconds of regulation and walked off with a 122-115 overtime victory.

Why? “The Knicks are a bad basketball team,” Mark Jackson, the former Knick, had explained earlier on the ABC broadcast.

When it was over, Randle said the Knicks benefited from playing faster, and that they should be able to build off their breathless 71-point first half. He praised Barrett for scoring a career-high 36 while also guarding James. Randle brought up LeBron’s age, 37, and his ability to keep playing at such a high level. “It’s crazy,” he said.

Crazy enough for James to say his bum knee didn’t feel that good in warmups. “I just gave it a shot, and see what happens,” he would say. “And you saw what happened.” LeBron was asked about keeping on in the wake of his friend Tom Brady’s retirement. “He’s been my motivation factor over the last few years,” James said. “A small piece of me definitely left when Brady decided to retire, that’s for sure.”

But enough stayed in place to beat the Knicks. In the mano-a-mano that got top billing, James finished with 29 points, 13 rebounds and 10 assists, and his visiting counterpart finished with 32 points, 16 rebounds and seven assists. For much of the night, Randle didn’t look like the guy who has spent much of 2021-2022 playing his way toward yet another new job.

But he’s running dangerously low on time, and seems to know it; his ejection near the end of the Memphis loss the other night seemed the act of an overly frustrated man. Will Randle get traded in the next five days? After what he did for the city last year, it’s hard to believe that’s even a question. When asked the other day about his name popping up in deadline chatter, Randle repeatedly challenged a reporter for details before he rattled off the names of every decision-maker in the Knicks’ front office.

“I trust them,” Randle said.

But do they still trust him? Randle praised owner James Dolan for being “super supportive in us as players,” suggesting to people unfamiliar with how the Knicks have played this season that everything is just fine.

Of course, nothing is just fine when you’re 24-29, sitting in 12th place in the conference, and in no position to believe life will get any easier. This loss to the Lakers started a brutal 16-game stretch that could leave the Knicks’ playoff hopes in tatters.

Randle has helped put his team in peril, even though he still leads the Knicks in scoring, rebounding and assists. He failed to make a second straight All-Star team for perfectly understandable reasons, then maintained he wasn’t disappointed in missing out.

He hasn’t won nearly enough of them. Randle might not get traded by Thursday, but unless things dramatically change, it’s hard to picture him making it to opening night in the Garden next fall.

Hey, maybe Julius Randle will go on a sudden tear, carry the Knicks up the conference ladder over the final 29 games, and turn his season from hell upside down.

Or maybe his good times in New York were always meant to be a one-and-done deal.