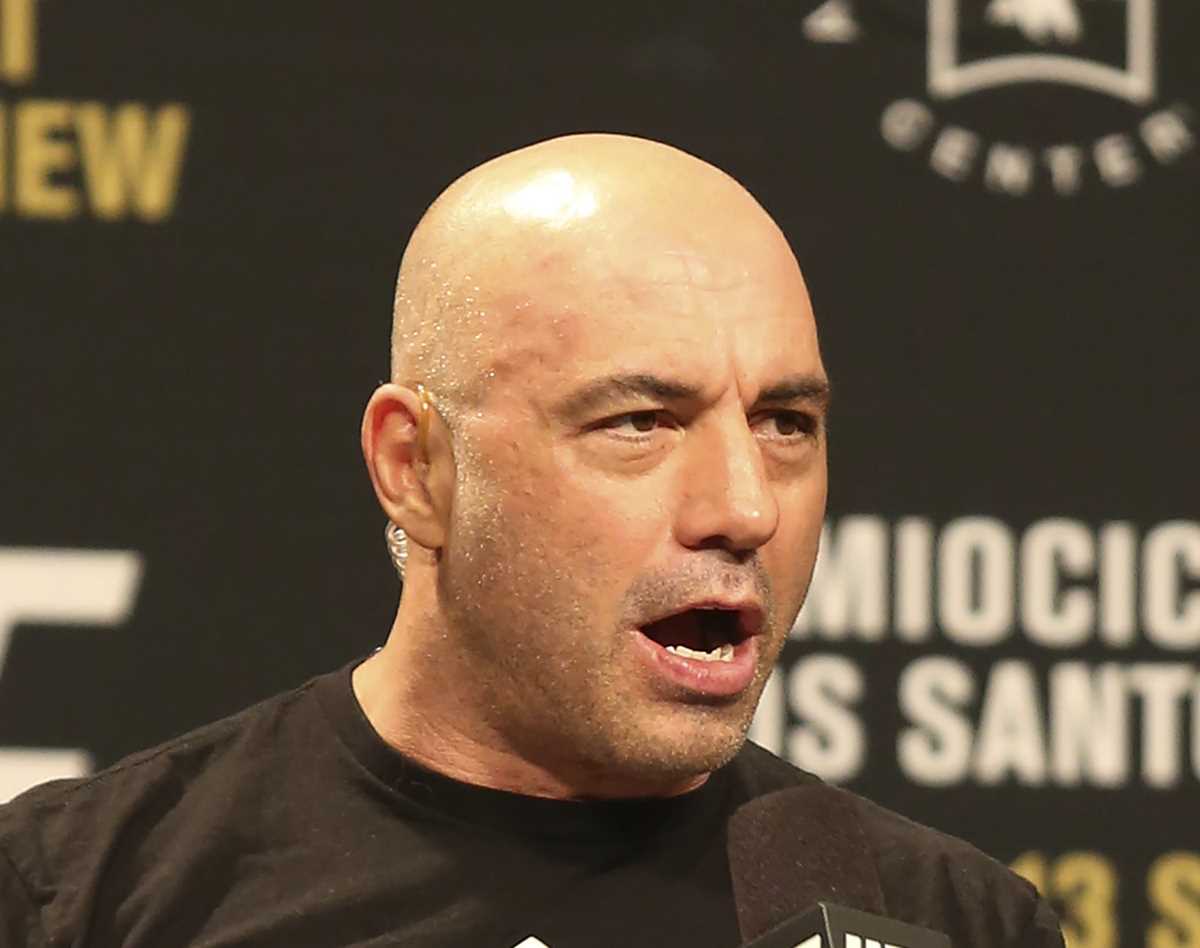 Joe Rogan is seen during a weigh-in before UFC 211 on Friday, May 12, 2017, in Dallas before UFC 211. Spotify’s popular U.S. podcaster has apologized after a video compilation surfaced that showed him using racial slurs in clips of episodes over a 12-year span. In a video posted on his Instagram account on Saturday, Feb. 5, 2022, Rogan who hosts a podcast called “The Joe Rogan Experience,” said his use of the slurs was the “most regretful and shameful thing that I’ve ever had to talk about publicly.” ( AP Photo/Gregory Payan, File)

In a video posted on his Instagram account, Rogan, who hosts a podcast called “The Joe Rogan Experience,” said his use of the slur was the “most regretful and shameful thing that I’ve ever had to talk about publicly.” But he said the clips were “taken out of context.”

“It’s not my word to use. I am well aware of that now, but for years I used it in that manner,” he said during the six-minute video on his Instagram account. “I never used it to be racist because I’m not racist.”

Rogan’s mea culpa follows Grammy award-winning singer-songwriter India.Arie’s announcement on Thursday that she was removing her music from the Spotify streaming service because of the racial slur that Rogan had made during his podcasts. She posted the video montage of Rogan’s clips on her Instagram account. Rogan, who launched his podcast in late 2009, didn’t specify which years he used the racial slur.

In her video, Arie said even if some of Rogan’s conversations were taken out of context, “he shouldn’t be uttering the word.”

“Don’t even say it under any context,” she added.

Rogan’s message Saturday addressed a video a clip from his podcast 11 years ago in which he talked about going to a movie theater in a Black neighborhood to see “Planet of the Apes”.

“I was trying to make the story entertaining, and I said we got out and it was like we were in Africa. It’s like we were in ‘Planet of the Apes.’,” Rogan said. He said he wasn’t trying to be racist but realized it was “an idiotic thing” to say. He said he deleted the podcast but that someone must have saved the clip.

Rogan’s apology comes as Spotify is promising to combat the spread of COVID-19 misinformation as part of a damage-control campaign sparked by musician Neil Young, who called out the streaming service’s top podcaster for magnifying vaccine skepticism.

He’s delivered an 83% win rate, but he guarantees he’ll beat that!

Watch how he does it…

Last Sunday, Spotify said it will soon add a warning before all podcasts that discuss COVID-19, directing listeners to factual, up-to-date information from scientists and public health experts. The company also aims to bolster transparency about its publishing decisions by laying out the rules it uses to protect users’ safety.

Spotify garnered 31% of the 524 million worldwide music stream subscriptions in the second quarter of 2021, more than double that of second-place Apple Music, according to Midia Research. Spotify isn’t always popular with musicians, many of whom complain that it doesn’t pay them enough for their work.

Arie said on her video that Spotify is built on the back of the music streaming business and that it uses that money to reward Rogan in a lucrative deal. She said she doesn’t want to generate money that pays for the podcaster.

Spotify didn’t respond immediately to a request for comment.

7 Cyclical Stocks That Make Sense In a Volatile Market

Despite many predictions of an imminent, and possibly severe, market correction, 2021 has been a great year for investors. And that’s particularly true for investors who invested in cyclical stocks. This group of stocks was hit hard as the economy ground to a halt. This makes sense because cyclical stocks move in the direction of the broader economy.

But that’s also why, almost immediately, many of these stocks began to come back. And with the economy reopening, these stocks continue to show strength.

Cyclical stocks are commonly dividend into companies that manufacture durable goods, non-durable goods, or deliver services. At any given time, one or more of these sectors has outperformed others. But for the most part investors that bought into cyclical stocks continue to be rewarded.

In this presentation, we’ll take a look at seven cyclical stocks that are proving to be resilient even as the market continues to baffle even the most experienced investors.

View the “7 Cyclical Stocks That Make Sense In a Volatile Market”.