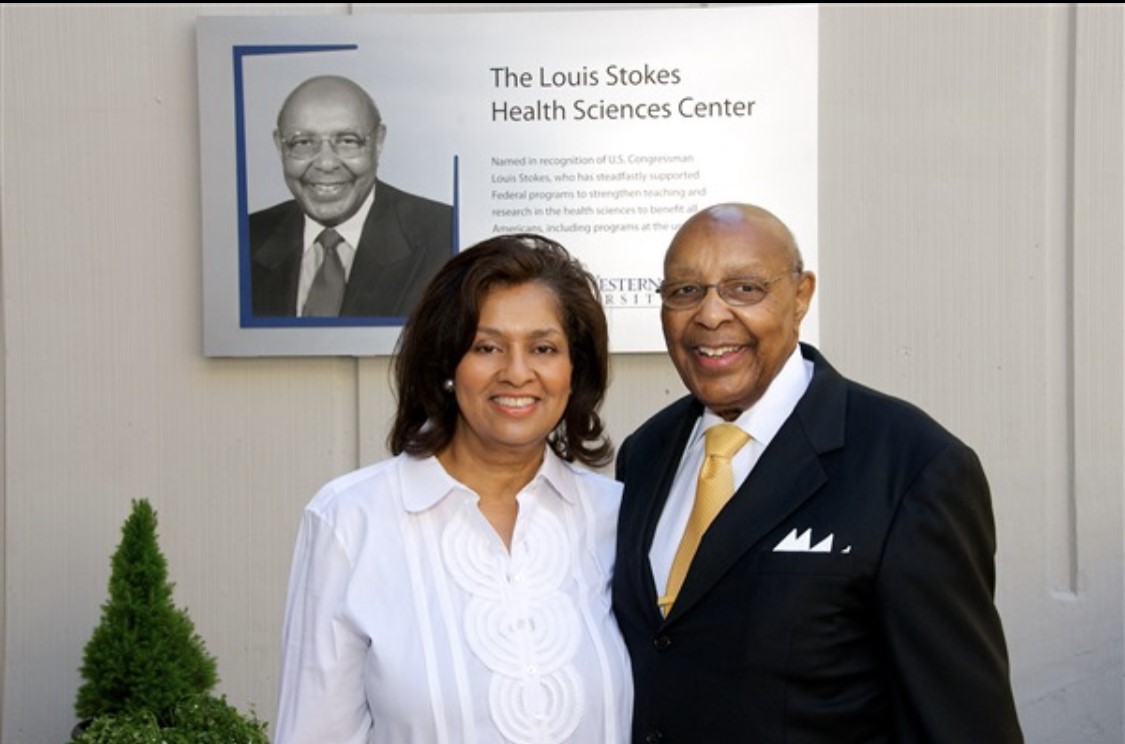 Stokes’ husband passed away in 2015. And she is survived by their four children and multiple grandchildren, including FOX 8’s own reporter Alex Stokes.

Jeanette “Jay” Stokes, wife and life partner of former Congressman and Civil Rights champion Louis Stokes, passed away peacefully in Cleveland on Oct. 30, 2021, at the age of 83.

Jay was born to parents Thomas and Allie on February 26, 1938 in Trenton, New Jersey. She grew up with her dear sister and best friend, Arline Dixon. When she was a child—at the age of nine years old—Jay was diagnosed with Rheumatic and Scarlett Fever and confined to the UH Rainbow Babies and Children Hospital for two years of her young life.

Ever the fighter, Jay went on to beat the illnesses — though she was told that she would be unable to have children of her own. After graduating from John Hay High School, as a young African American woman, Jay attended the Cleveland Institute of Art and explored various career pursuits — from a position with the Cleveland Board of Education to a successful modeling career after attending the Artha-Jon School of Modeling in Cleveland, later teaching at the Earl Wheeler-School of Modeling and the Billy Tilton Finishing School and Modeling Agency.

Jay was set up on a blind date at Cleveland’s historic Karamu House with Louis Stokes, a young lawyer with three children. She would joke she was skeptical at first— an older man with three kids from a previous marriage. Nevertheless, she quickly fell in love with him and their shared drive, determination, and desire to make the world a more equitable place. In 1960, at the age of 22, Jay married Louis at East Mt Zion Baptist Church and became stepmother to three young children.

In 1962, Jay beat the odds when she welcomed her own daughter, Lori, who went on to have a successful national career in journalism.

Despite her reluctance to be in the spotlight, Jay and Lou became a team — successfully campaigning for each of his 15 terms in Congress, attending every state dinner and political engagement and forming powerful relationships of her own with world leaders.

She attended Democratic Conventions around the country and accompanied her husband on fact-finding CODELS (congressional delegations) around the globe. From friendships with Presidents Lyndon B. Johnson and Jimmy Carter to audiences with Pope John Paul II, Jay carried out her role with the utmost grace and poise. Together, she and Lou — whom she lovingly called Cap — were unstoppable.

Jay dedicated her life to her husband and her children. They remember her fondly as a woman who wore many hats around the house. As her son Chuck remembers, she could pick up a screwdriver and measuring tape to repair something at home one minute, only to be dolled up and fashionable for an event that evening. Her daughter Shelley lovingly remembers her reading poetry and exploring the World Book Encyclopedia with them. Her daughter Angie remembers her detailed and exquisite decorating. Lastly, her daughter Lori affectionately remembers her beautiful writing and unending dedication as a mother, always her children’s biggest cheerleader. Their plight was her plight, their success was her success. But Lori ponders, “The truth of the matter is, how do you put into a sentence what someone has done in a lifetime?”

After her children were old enough, Jay revisited her career and became a multi-million-dollar realtor with Long & Foster in Maryland—where she and Stokes’ had a second residence because of his congressional career. She also was a field director for the Miss D.C./U.S.A. pageants.

Jay was the receipt of numerous awards. In 1979, she was selected by Hurray for Black Women as the Wife and Mother of the Year. In 1986 she was recognized for her role as a Member of the Board of Directors for the Congressional Black Caucus Foundation. In 1994 she was recognized by The Phillis Wheatley Association for her Years of Outstanding Community Service. In 1998 she was honored by General Mills Inc. for outstanding leadership in health education and in 2015, she was honored by Mt. Zion Church in Oakwood Village as an Amazing Woman of Courage.

She also had a quiet, reserved side. She was a brilliant artist who enjoyed the simple things, such as spending time with her grandkids and listening to Johnny Mathis’ albums. She enjoyed bowling and trips to Martha’s Vineyard and St. Michaels.

Jeanette Stokes was many things to many people and dedicated her life to others. Above all else, she would describe herself as a loyal wife and mother.

In Congressman Stokes’ autobiography, The Gentleman from Ohio, finished days before his passing in 2015, he wrote: “To my beloved wife Jay, who has been the bedrock for me through all the years in all I was able to do. The best wife a man could have. In memory of the complete and fulfilled life she gave me.”

What a wonderful life she gave us all.

Funeral information has not been released to the public yet.