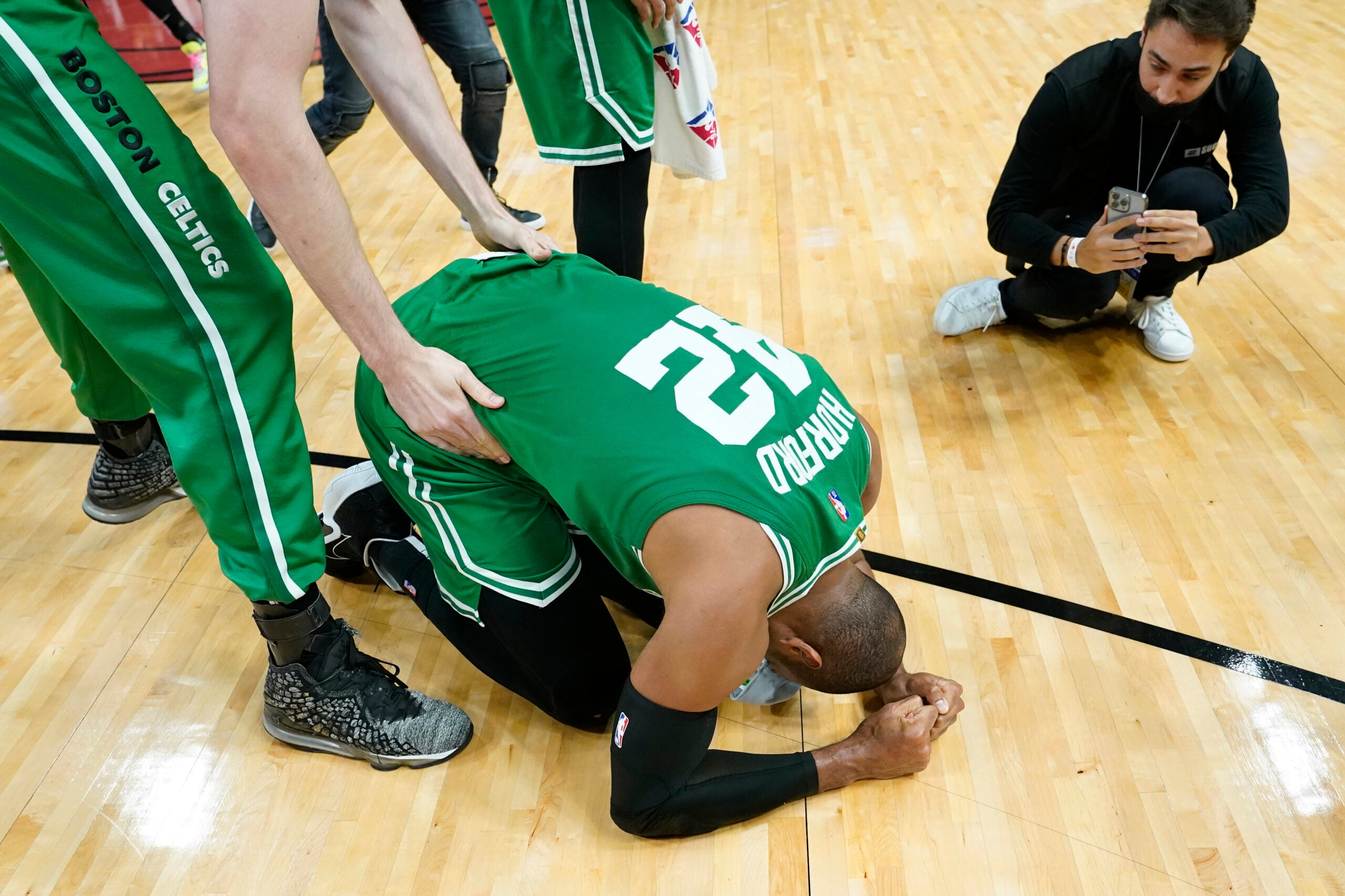 Al Horford has experienced just about everything in his 15-year NBA career, one in which he long ago earned the reputation as Mr. Reliability, a poised and almost regal presence who could be leaned on to do the right thing under any circumstance.

But in the most satisfying moment of his career, Horford was temporarily stumped.

As he secured the rebound of the final missed shot of the Miami Heat’s season in the Celtics’ 100-96 victory in Game 7 of the Eastern Conference finals Sunday night, he wasn’t quite what to do next.

For understandable reasons, too. After playing 950 regular-season games and another 141 in the playoffs, Horford was heading to the NBA Finals for the first time. No player in NBA history has played more playoff games before reaching the Finals.

“Yeah, man, just didn’t know how to act,” said Horford, who of course got the moment right anyway, heaving the ball to the rafters, sprinting to midcourt to join the flash mob of joyous teammates, pirouetting a couple of times while seeking out teammates to embrace, then dropping to his knees and rejoicing while yelling, “Yes! Yes!”

“These guys, I’ve seen JB [Jaylen Brown] come in the league, take steps, take levels. I’ve seen JT [Jayson Tatum] do the same thing. I’ve seen [Marcus] Smart grow. For me it’s just special to be with them and be able to help them and be a part of this. I’m really grateful to be in this position.”

Turning the conversation to his pride in his teammates is as familiar a Horford move as one of his praying-mantis corner threes. But on this night, his fellow Celtics — so happy for their dependable, respected, and eldest teammate (he turns 36 Friday) — made sure he received his bouquets of praise.

“Nobody deserves it more than this guy on my right right here, man,” said Brown, sitting next to Horford at a postgame press conference. “His energy, his demeanor, coming in every day, being a professional, taking care of his body, being a leader.

“I’m proud to be able to share this moment with a veteran, a mentor, a brother, a guy like Al Horford, man. He’s been great all season, really my whole career.”

Horford did not submit his finest statistical performance. He made just 2 of 9 shots, including 1 of 6 from 3-point range, his lone make giving the Celtics a 12-3 lead in the first quarter. After missing the first game of the series while in health and safety protocol (doesn’t that feel like it happened about two months ago?), Horford emerged as a thinking fan’s candidate for the Larry Bird Trophy after a 16-point, 7-rebound, 5-assist performance in the Celtics’ Game 5 win. But he scored just 8 points over the final two games.

The reasons for his struggles in Game 6 were understandable; it was revealed afterward that he had played despite the death of his maternal grandfather José Reynoso Núñez on Thursday at age 81.

“It’s been difficult for me and my family,’’ said Horford. “My grandfather was somebody that I was extremely close with, somebody that I really care for. All week my mom and my family told me to just go out there and play. That’s something that he would have wanted me to do, to just continue on and really just try and stay focused and understand that he’s at peace now.”

Horford’s shot still refused to fall in Game 7, but as he usually does, he found other essential ways to contribute in 44 minutes of playing time, the most he’s played in any game all season.

He delivered two stunning blocks — a denial at the rim of Max Strus in the first quarter, and a swat of a Victor Oladipo up-and-under in the fourth. More important, he became a rebounding force in the second half, grabbing 10 of his 14 rebounds after the break, including six in the fourth quarter.

He probably should have been credited for a seventh fourth-quarter rebound, too, since he ended up with the ball after the tensest play of the game. The Celtics had built a 98-85 lead with 3:35 left, but a tough, proud Miami team refused to go quietly, ripping off an 11-0 run with the aid of some dubious Smart shots.

And all of a sudden, with 18 seconds left, the lead down to 2, and everything — the season, reputations, all of it — hanging in the balance, the Heat’s indefatigable Jimmy Butler hauled in a rebound and took off, with Horford back to defend.

Horford squared his body and retreated slightly. Butler, a 23.3 percent 3-point shooter during the regular season but a habitual marksman with the stakes highest, pulled up. Front rim. Short. Brown tipped the rebound and got credit for the board, but it was Horford who plucked it from the sky. I suspect there are some Celtics fans who still haven’t exhaled since that moment.

“I didn’t know what he was going to do,’’ said Horford. “It seemed like he was going to go for the shot, but I had to make sure that I stayed solid, and when he pulled up for the three, I was like, ‘Let me contest the best way that I can.’

A few seconds later, after a pair of Smart free throws put the Celtics up 4, Horford got control of the ball once more, after Miami’s last gasp, last shot, and last play of the season.

When the ball and victory were both secured, he wasn’t quite sure what he was going to do there, either. But in that familiar Horford way, he got it just right.

It’s one of the reasons why his teammates appreciate him so much, and were so happy for him. He’s always right there where you need him to be in the end.

Get breaking news and analysis delivered to your inbox during basketball season.