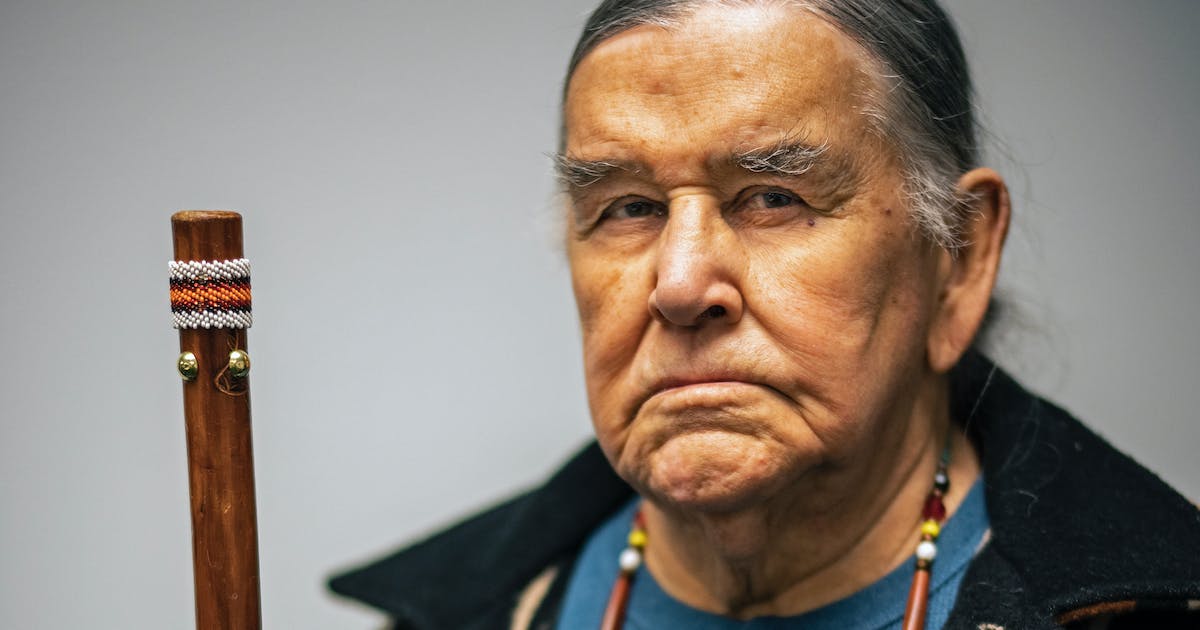 American Indian leader Clyde Bellecourt traveled across the country in recent years on a mission to make the Washington Redskins football team change its name, which he denounced as a racist slur.

The team said it would never change its name, “and Clyde would say, ‘We will never, ever stop marching until you do,’ ” activist Spike Moss said. “The name is no longer the Redskins.”

Hundreds of people paid their respects to the legendary Bellecourt on Thursday night, gathering at East Phillips Park Cultural and Community Center for traditional midewiwin funeral rites. Friends and dignitaries shared stories of his determination, courage and relentless fight for Native Americans’ civil rights, and reflected on the opportunities he forged for younger generations of indigenous people.

Bellecourt died of cancer in his Minneapolis home on Tuesday. He was 85.

Lt. Gov. Peggy Flanagan honored him “for preparing a path for so many of us, for ensuring that Indian people are seen and heard and valued, and that we are visible in a way that would not have been possible without Clyde Bellecourt.”

Bellecourt helped found the American Indian Movement (AIM) in 1968, building it into a national force of activism. He organized community patrols on the streets of Minneapolis to combat police brutality against Native Americans, led a march to Washington, D.C., in 1972 called the Trail of Broken Treaties, and staged a 71-day occupation of Wounded Knee, S.D., the following year to bring attention to corruption and injustice. Bellecourt started organizations to provide better education, health care and legal rights for Indians.

“I think he was probably one of the best community organizers in America because he helped organize a number of institutions that are still serving the community for many races, not just Indians,” said Bill Means, who worked closely at AIM with Bellecourt for 30 years.

“He stood out because he had a booming voice that couldn’t be ignored, and so many times he used to break through the doors of prejudice and racism and challenge people and institutions to include Indian people in their developments and their thinking and their service.”

If it involved Indians, Means added, they knew they could depend on Bellecourt to attend a meeting to try to further the cause.

Bellecourt was “respected by many, maybe even hated by some, but never ignored,” said Means.

Katie Denomie, Bellecourt’s sister-in-law, recalled accompanying him on the Trail of Broken Treaties, ending in the occupation of the Bureau of Indian Affairs in Washington, D.C., to protest the agency’s mismanagement.

“He was a strong leader, a very strong leader that believed in everybody no matter what color you were,” she said. “He wanted equal justice for any human being and he fought hard.”

Denomie said Bellecourt would be buried Saturday on White Earth Reservation, where he was born and raised.

Moss, a Black civil rights leader, was a teenager in 1966 when he met Bellecourt. The native leader taught him about activism, and they’d show up for one another’s causes over the years, uniting to fight police violence in Native American and African American communities. Moss carries his mentor’s lessons of never backing down or giving up.

“He taught me what it was to be brave, to be bold, to be unafraid to fight for what you want no matter what they do to you,” Moss said.

The pair traveled across the nation to protest the Redskins name, with Bellecourt organizing massive demonstrations. The NFL team finally dropped the name in 2020.

Bellecourt had a lighter side, too.

“The thing this man loved the most was to joke and laugh and, boy, we would joke and laugh,” said Moss. “Clyde wasn’t right unless he was having fun.”

“There are few people that leave such a mark where your remember every single interaction with them, and Clyde had that sort of charisma. … His presence was literally preceded by drumbeats every single time he entered City Hall,” said Frey.

Joe Hobot said the best education he got was being around Bellecourt and hearing his stories about activism, securing resources for the community and ensuring that natives were respected and reflected in the highest circles. Hobot saw him exemplify the old saying of AIM leadership, “anytime, any place, anywhere.” Bellecourt was always there, whether it was protesting over the Dakota Access Pipeline at Standing Rock or Enbridge Line 3 in Hubbard County.

“The fact that our community is able to thrive and survive and the network of nonprofits that support our community is all because of the work that he did,” said Hobot, president and CEO of American Indian Opportunities Industrialization Center, which Bellecourt founded. “And so it’s incumbent upon us to honor his legacy by working extra hard. He always used to say, ‘You’ve got to put the work in.’ “