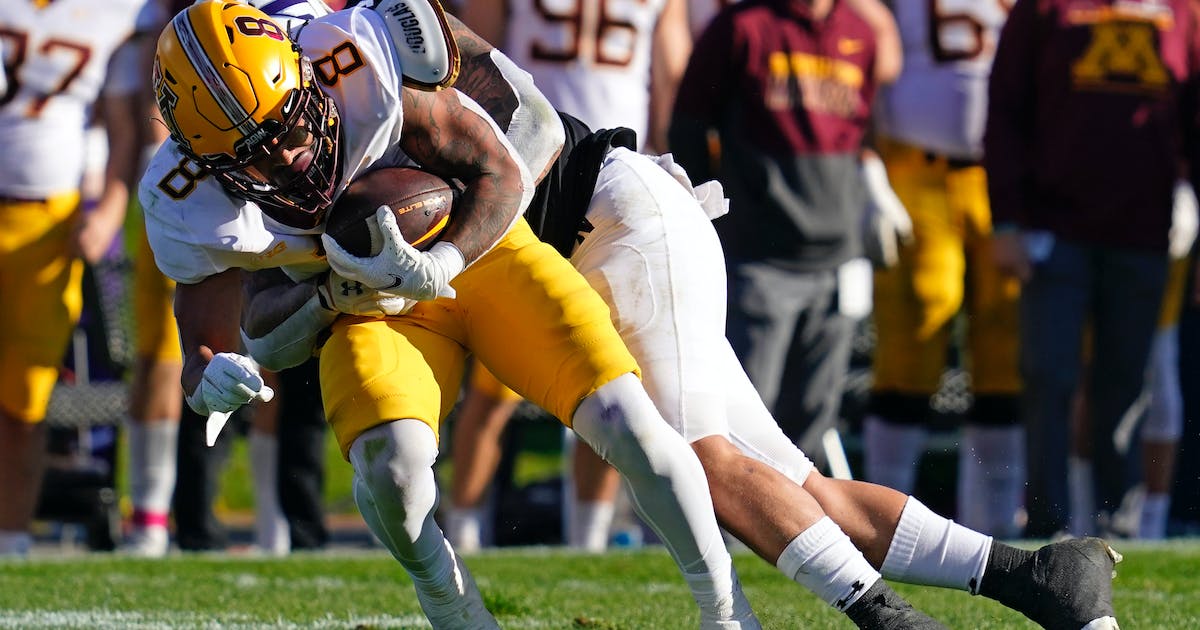 EVANSTON, ILL. – The Gophers took care of business Saturday, methodically pounding away at Northwestern, rushing for 308 yards and holding the ball for more than 40 minutes on their way to a 41-14 victory at Ryan Field. In the process, they took full advantage of what transpired in Madison, Wis., earlier in the day, when Wisconsin knocked off Iowa 27-7.

Those two results mean that the Gophers (6-2, 4-1) sit alone atop the Big Ten West Division’s standings, a game ahead of both the Badgers and Hawkeyes, teams that Minnesota will play in November. With four games remaining in the regular season, the Gophers control their own destiny in the division race. They also gained bowl eligibility with the win.

The victory came with a price, however. Gophers running back Bryce Williams left the game and was taken by cart to the locker room after suffering an injury to his lower left leg. Williams, a redshirt junior who ranked fourth on the team with 181 rushing yards entering Saturday, was injured while being tackled after a 19-yard gain on a third-down catch in the first quarter.

Quarterback Tanner Morgan got in the act, too, running 18 yards untouched on the first play of the fourth quarter to boost the Gophers lead to 27-7. They punctuated the victory with 24-yard touchdown run by Derik LeCaptain, a special-teams ace and linebacker who’s filling in at running back.

The Gophers took the opening kickoff and marched to the Northwestern but settled for Matthew Trickett’s 26-yard field goal. On second-and-7 from the 9, Morgan threw high to Daniel Jackson in the end zone, and on third down Northwestern stopped Cole Kramer for a 2-yard gain.

Minnesota’s defense quickly got into the act with a turnover for a touchdown and 10-0 lead. On Northwestern’s first play from scrimmage after a false start penalty, wide receiver Malik Washington caught a swing pass and was stretching for extra yards. Linebacker Mario Sori-Marin knocked the ball loose just before Washington’s knee hit the ground, and defensive back Justin Walley scooped up the ball and returned it 25 yards for the TD.

Boye Mafe’s third-down sack of Ryan Hlinski forced a three-and-out on Northwestern’s next possession. The Gophers drove to the Wildcats 11 but settled for a 30-yard field goal by Trickett for a 13-0 lead. On the drive, Morgan hit Williams for a 19-yard gain on third-and-10 and Thomas for an 11-yard gain on third-and-7.

Northwestern drove 75 yards to cut the lead to 13-7 with 11:51 left in the second quarter on Andrew Marty’s 6-yard TD pass on a screen to Hull on third-and-goal. Hull, a sophomore from Maple Grove, started the 11-play march with a 30-yard run.

The Gophers responded with an 11-play, 75-yard drive lasting 7:04 that was capped by Irving’s 3-yard TD run with 4:47 left in the second quarter. Key on the march were receptions of 17 and 18 yards by Mike Brown-Stephens.

Minnesota’s defense forced a three-and-out on three incompletions by Hlinski, and the Gophers offense took over at its 22 with 4:21 left in the second quarter. The Wildcats’ possession lasted only 26 seconds.

Morgan’s 24-yard hookup with Brown-Stephens helped the Gophers drive to the Wildcats 22 with 40 seconds left on the second quarter. But Morgan’s pass on third-and-6 was tipped by Northwestern cornerback AJ Hampton Jr. and intercepted in the end zone by safety Brandon Joseph.

On the first possession of the third quarter, Northwestern drove to the Gophers 28, but Minnesota got a defensive stop when Marty’s fourth-and-3 pass fell incomplete.

The Gophers stretched their lead to 27-7 on the first play of the fourth quarter on Morgan’s 18-yard run on an option that fooled the Wildcats defense. It finished a 11-play, 71-yard drive that took 6:21.