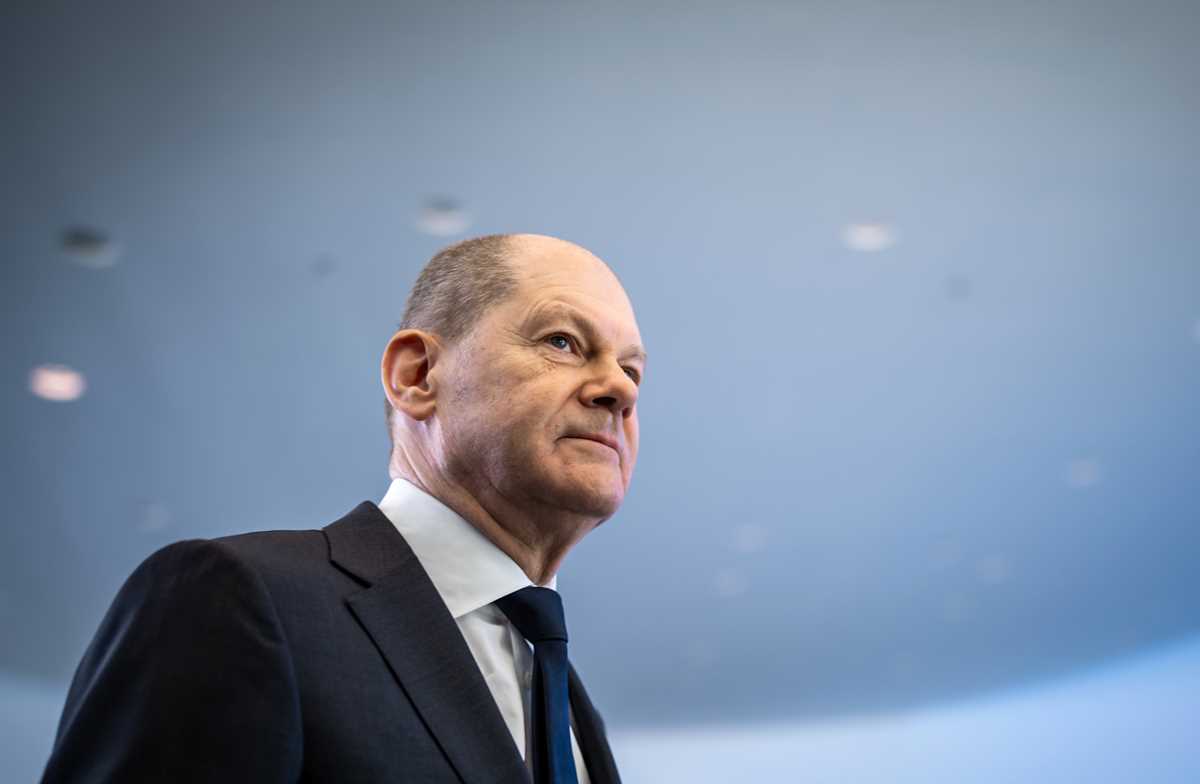 German Chancellor Olaf Scholz leaves after a news conference, ahead of a one-day closed meeting of the German Cabinet at the Chancellery in Berlin, Germany, Friday, Jan. 21, 2022. Scholz is flying to Washington this week to reassure Americans that his country stands alongside the United States and other NATO partners in opposing any Russian aggression against Ukraine. Scholz has publicly said that Moscow would pay a “high price” in the event of an attack. But his government’s refusal to supply lethal weapons to Ukraine, bolster its troop presence in eastern Europe or spell out which sanctions it would support against Russia has drawn criticism abroad and at home. (Michael Kappeler/Pool via AP, File) 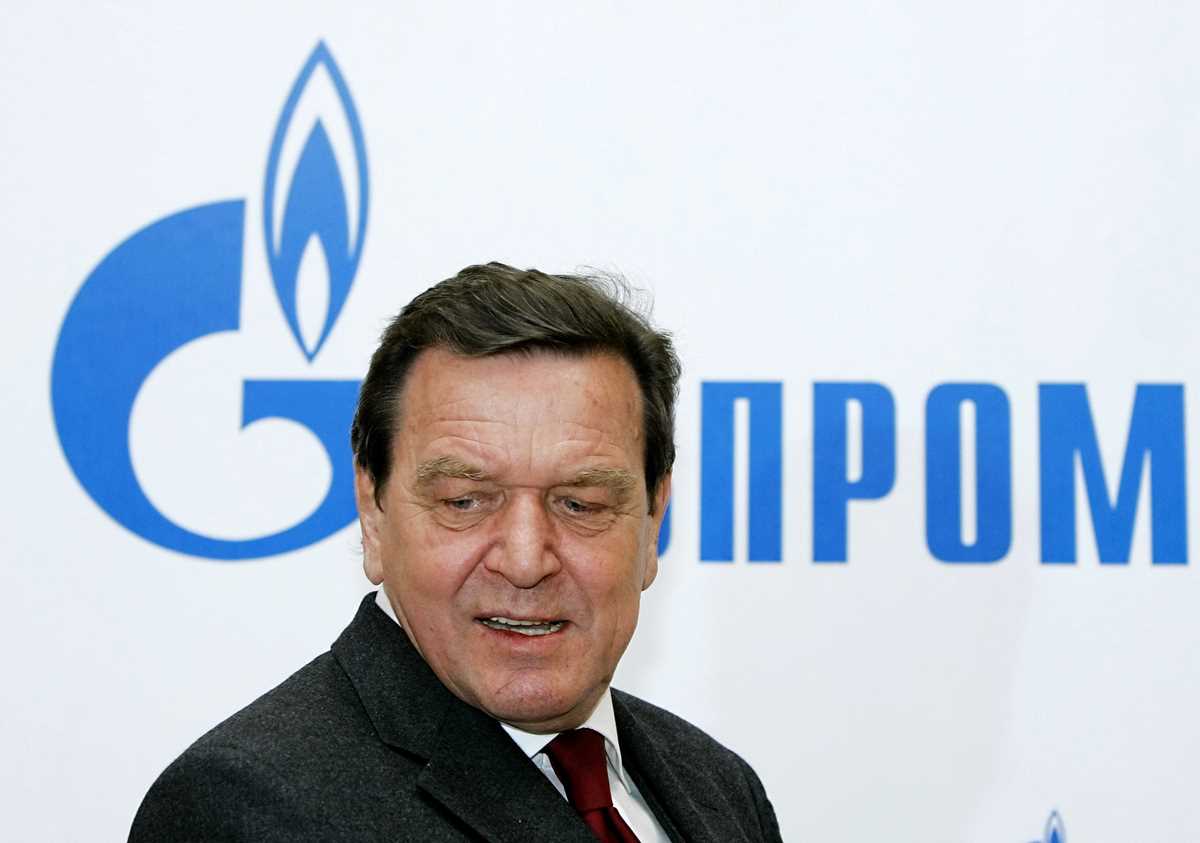 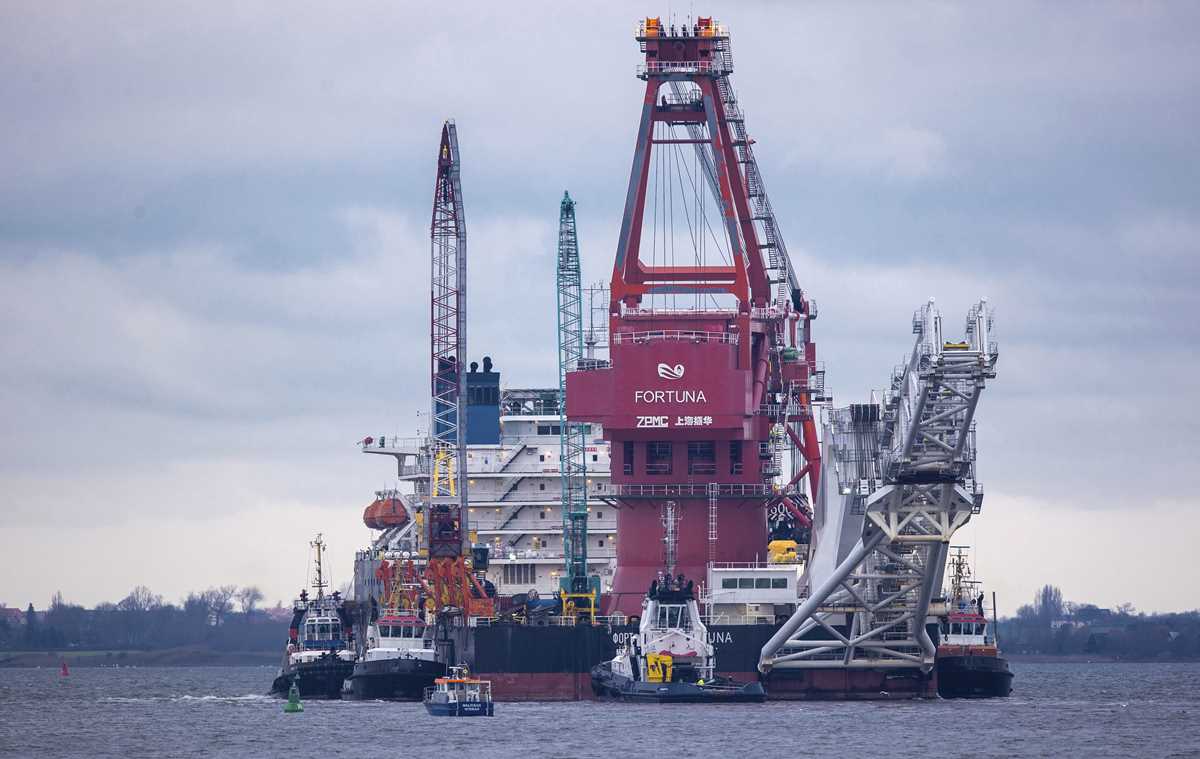 File photo shows tugboats get into position on the Russian pipe-laying vessel “Fortuna” in the port of Wismar, Germany,Jan.14, 2021. The special vessel is being used for construction work on the German-Russian Nord Stream 2 gas pipeline in the Baltic Sea. German Chancellor Olaf Scholz is flying to Washington this week on a mission to reassure Americans that his country stands alongside the United States and other NATO partners in opposing any Russian aggression against Ukraine. (Jens Buettner/dpa via AP, File) 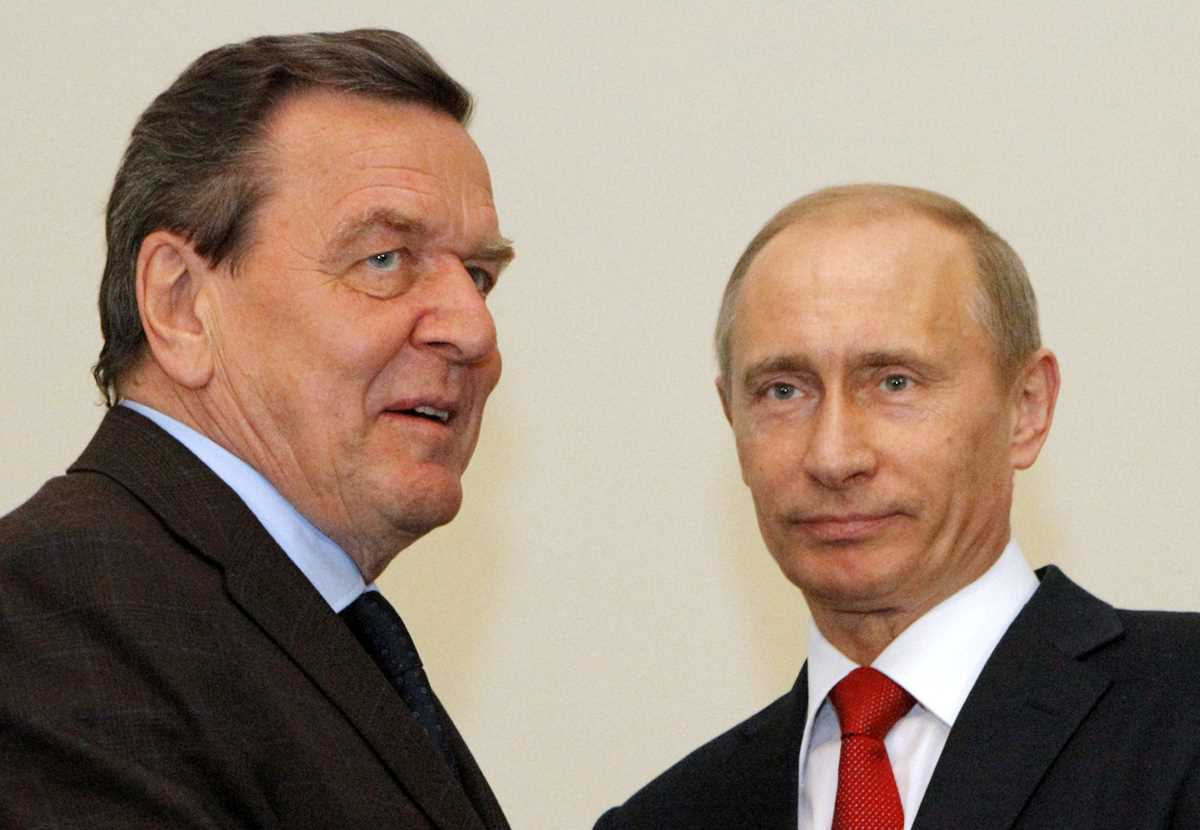 FILE—File photo shows Russian Prime Minister Vladimir Putin, right, and former German chancellor Gerhard Schroeder during their meeting in St. Petersburg, Russia. German Chancellor Olaf Scholz is flying to Washington this week on a mission to reassure Americans that his country stands alongside the United States and other NATO partners in opposing any Russian aggression against Ukraine. (AP Photo/Dmitry Lovetsky,file) 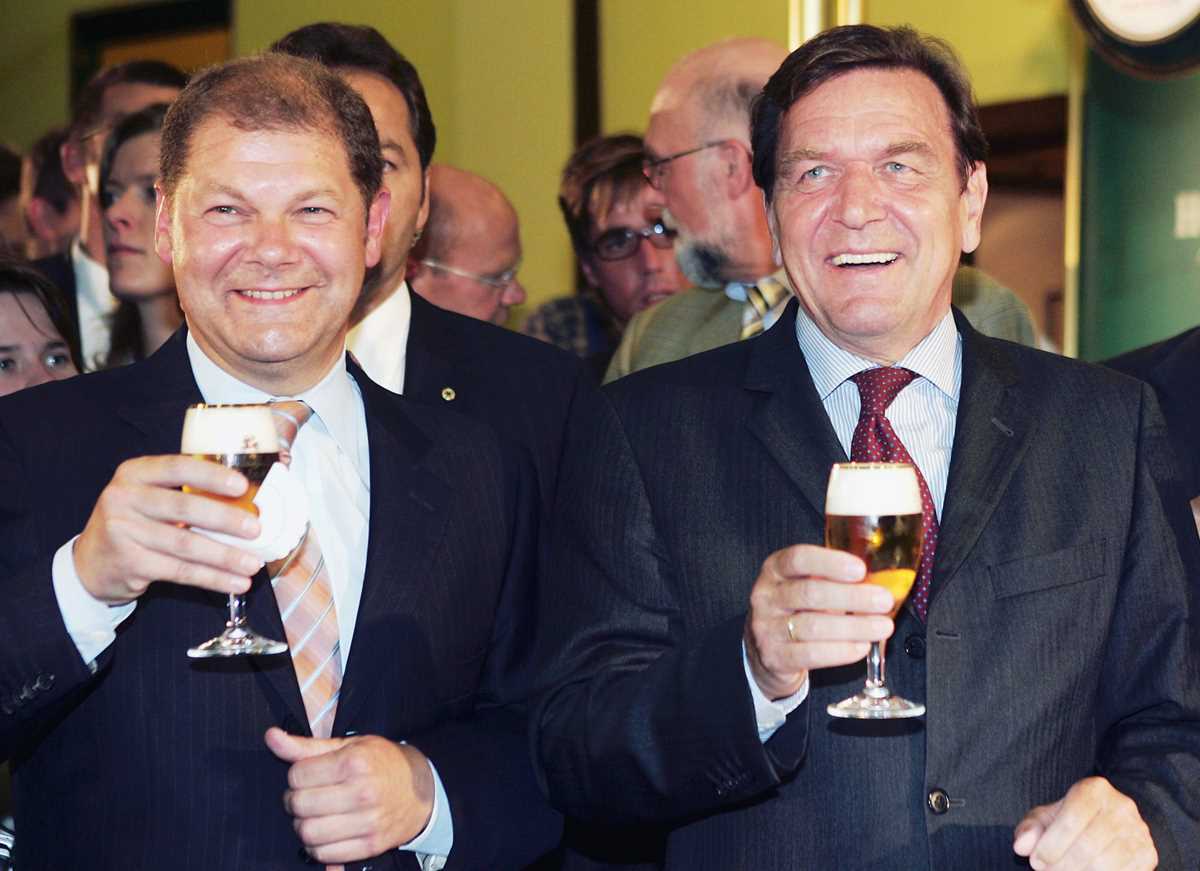 File-File Photo shows German Chancellor Gerhard Schroeder, right, drinking a glass of beer with Social Democratic member of German parliament Olaf Scholz during their visit to the Holsten brewery in Hamburg, northern Germany on Wednesday, Aug. 3, 2005. German Chancellor Olaf Scholz is flying to Washington this week on a mission to reassure Americans that his country stands alongside the United States and other NATO partners in opposing any Russian aggression against Ukraine.(AP Photo/Fabian Bimmer, file) 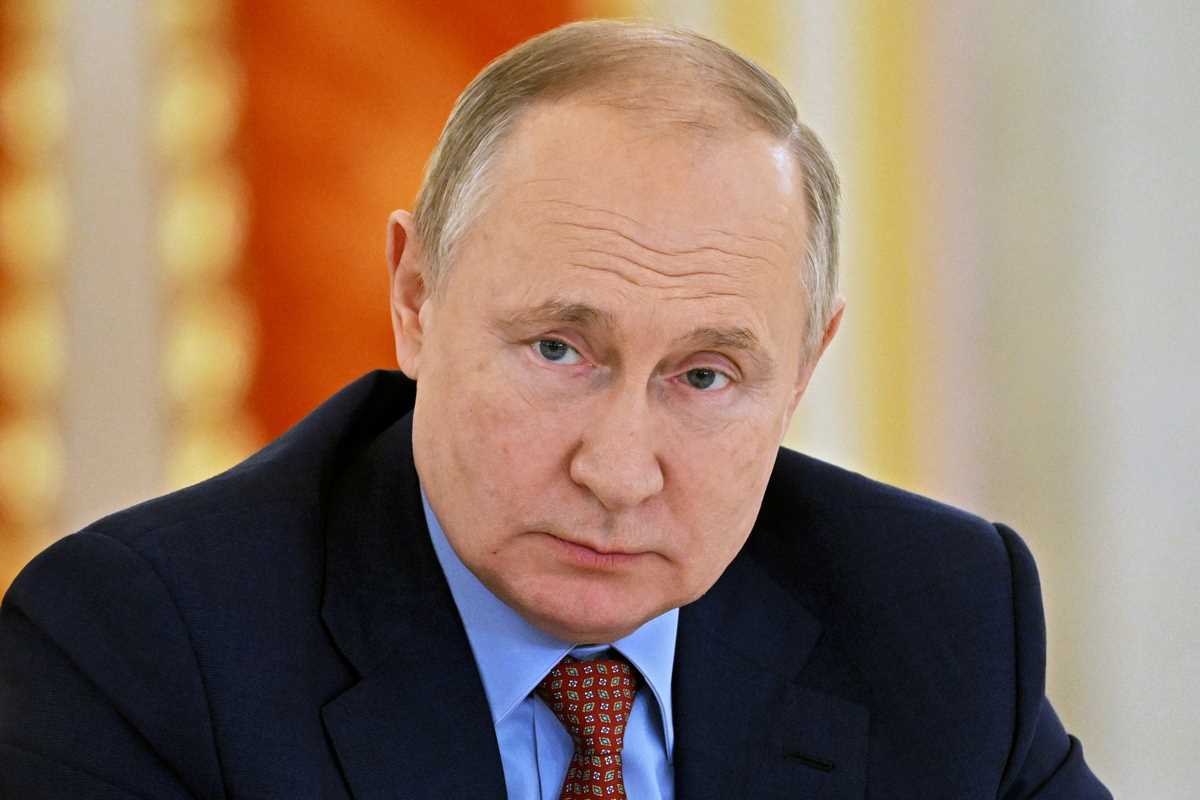 File–File Photo shows Russian President Vladimir Putin attending a meeting with members of Business Russia, All-Russia Public Organization in the Kremlin, in Moscow, Russia, Thursday, Feb. 3, 2022. German Chancellor Olaf Scholz is flying to Washington this week on a mission to reassure Americans that his country stands alongside the United States and other NATO partners in opposing any Russian aggression against Ukraine. (Alexei Nikolsky, Sputnik, Kremlin Pool Photo via AP,file)

BERLIN (AP) — German Chancellor Olaf Scholz set off Sunday for Washington seeking to reassure Americans that his country stands alongside the United States and other NATO partners in opposing any Russian aggression against Ukraine.

Scholz has said that Moscow would pay a “high price” in the event of an attack, but his government’s refusal to supply lethal weapons to Ukraine, bolster Germany’s troop presence in Eastern Europe or spell out which sanctions it would support against Russia has drawn criticism abroad and at home.

“The Germans are right now missing in action. They are doing far less than they need to do,” Sen. Richard Blumenthal, a Democrat and member of the Armed Services Committee, recently told an audience of Ukrainian Americans in his state, Connecticut.

This sentiment was echoed by Republican Sen. Rob Portman, who questioned why Berlin hadn’t yet approved a request to let NATO member Estonia pass over old German howitzers to Ukraine. “That makes no sense to me, and I’ve made that very clear in conversations with the Germans and others,” Portman told NBC.

Ahead of his trip, Scholz defended Germany’s position not to supply Kyiv with lethal weapons, but insisted that his country is doing its bit by providing significant economic support to Ukraine.

Asked about the future of the Nord Stream 2 pipeline that seeks to bring Russian gas to Germany under the Baltic Sea, bypassing Ukraine, Scholz refused to make any explicit commitments.

“Nothing is ruled out,” he told German public broadcaster ARD.

Germany has come under criticism over its heavy reliance on Russian supplies of natural gas and the pipeline has long been opposed by the United States. But is strongly supported by some in Scholz’s center-left Social Democratic Party, including former chancellor Gerhard Schroeder.

The 77-year-old Schroeder is close to Russian President Vladimir Putin and already heads the shareholders’ committee of Nord Stream AG and the board of directors of Nord Stream 2.

There aren’t many days left on the calendar… and yet the global semiconductor market grew to $466.2 billion – in spite of the pandemic.

These four tech companies are well-positioned to take advantage of this rapidly growing demand.

In a move likely to embarrass Scholz ahead of his first official trip to Washington, the Russian state-owned gas company Gazprom announced Friday that Schroeder — who has accused Ukraine of “saber-rattling” in its standoff with Russia — has been nominated to join its board of directors.

Despite Germany’s reluctance to officially put the new pipeline — which has yet to receive an operating permit — on the negotiating table with Russia, the United States has made clear that even without Berlin’s agreement the project is dead should Moscow launch an attack.

Scholz will meet President Joe Biden and members of Congress on Monday to try to smooth out differences. The 63-year-old’s performance in Washington could have broad implications for U.S.-German relations and for Scholz’s standing at home.

While former President Donald Trump frequently slammed Germany, accusing it of not pulling its weight internationally, his successor has sought to rebuild relations with Berlin.

“Biden has taken some real risks, including on the the issue of the German-Russian gas pipeline,” said Jeff Rathke, president of the American Institute for Contemporary German Studies.

“(Scholz’s) visit to Washington is an opportunity for him to try to turn that page,” said Rathke.

Having succeeded long-time German leader Angela Merkel last year, Scholz also needs to appease doubters at home who accuse him of pulling a diplomatic vanishing act compared to his European counterparts. With the phrase “Where is Scholz?” trending on social media last week, German conservative opposition leader Friedrich Merz called for “clear words” from the government on the Ukraine crisis.

“We must rule nothing out as a reaction to a further military escalation,” the leader of Merkel’s center-right bloc said, though he too has been skeptical about sending possible German arms shipments to Ukraine.

Others in Scholz’s three-party governing coalition have struck a harsher tone toward Russia.

Speaking alongside her Russian counterpart in Moscow last month, German Foreign Minister Annalena Baerbock of the Green Party branded Russia’s troop deployment at the border with Ukraine a “threat.” She plans to visit Ukraine on Monday and Tuesday and inspect the front line between Ukrainian troops and areas held by Russian-based separatists in the east.

Marie-Agnes Strack-Zimmermann, a member of the Free Democrats who chairs Germany’s parliamentary defense committee, said Schroeder’s work for Moscow “harms the country he should serve” and suggested removing the privileges he enjoys since leaving office.

Whatever Germany does to support Ukraine will likely come at a cost.

Meanwhile, some German officials worry that any mention of further sanctions against Russia, let alone a full-blown conflict, could drive up Europe’s already high gas prices. Constanze Stelzenmueller, a specialist on trans-Atlantic relations at the Brookings Institution, noted that Europe will bear the brunt of blowback costs from economic sanctions against Russia.

“You have populists in Europe always looking for ways to exploit political differences and tensions,” she said. “That’s what’s at stake here.”

In an uncharacteristic outburst at the start of the coronavirus pandemic, Scholz — who was then Germany’s finance minister — announced that he would be pulling out a figurative “bazooka” to help businesses cope with the crisis by setting aside more than 1 trillion euros ($1.1 trillion) in state aid.

Scholz may need to make a similarly expansive gesture to ease concerns in Washington and beyond, said Rathke.

“Germany is going to have to show that it is not only committed to the sovereignty and territorial integrity of Ukraine, but that it’s putting real resources behind it now, not just pointing to what it’s done in the past,” he said.

Geir Moulson in Berlin and Ellen Knickmeyer and Nathan Ellgren in Washington contributed to this report.