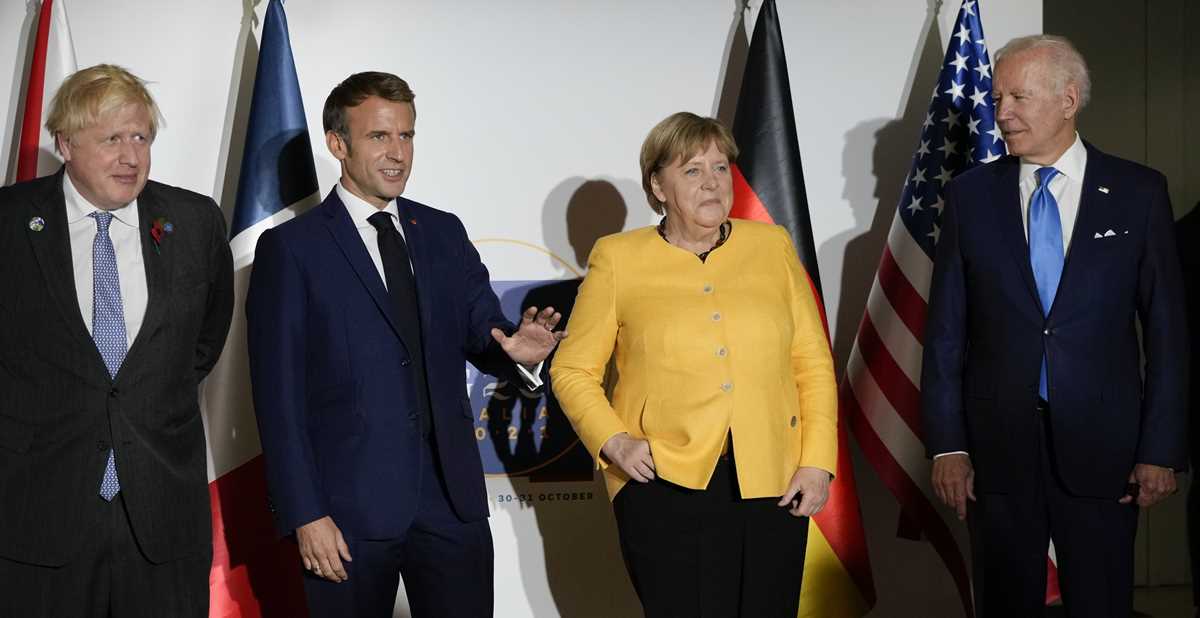 British Prime Minister Boris Johnson, French President Emmanuel Macron, German Chancellor Angela Merkel, and U.S. President Joe Biden, from left, pose for the media prior to a meeting at the La Nuvola conference center for the G20 summit in Rome, Saturday, Oct. 30, 2021. The two-day Group of 20 summit is the first in-person gathering of leaders of the world’s biggest economies since the COVID-19 pandemic started. (AP Photo/Kirsty Wigglesworth, Pool) 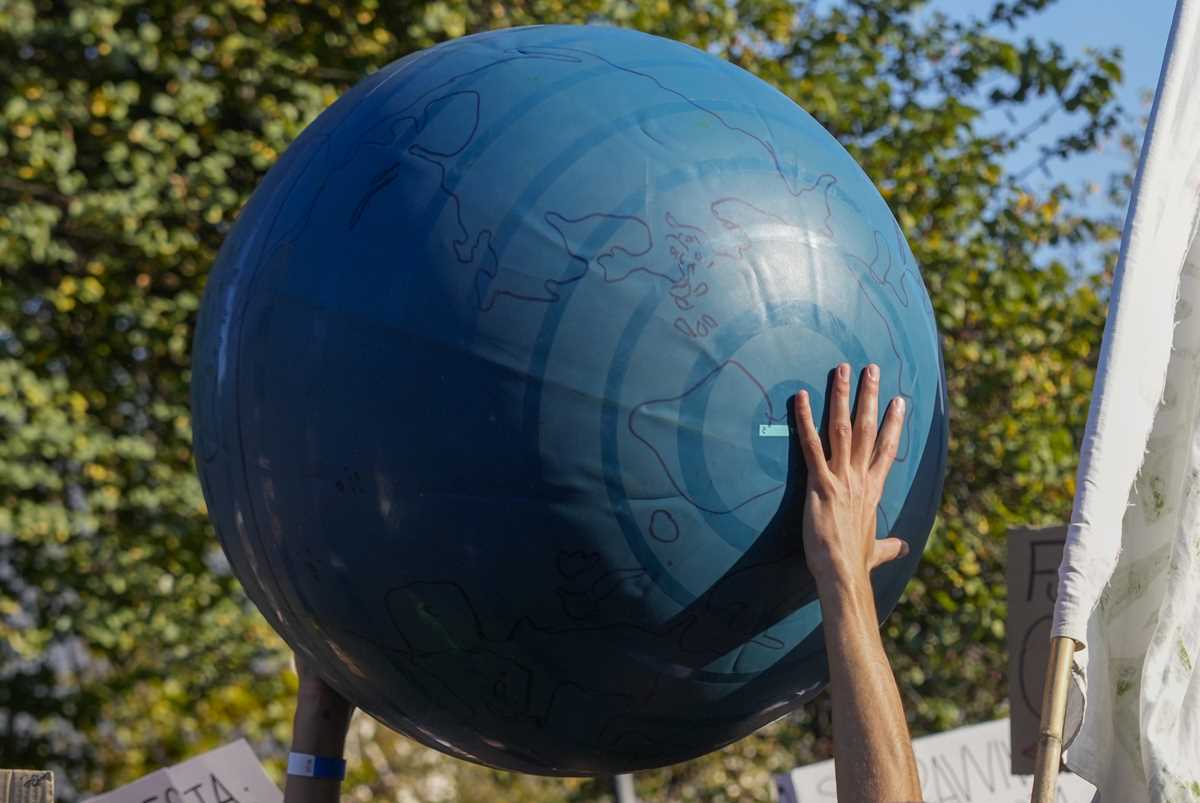 Demonstrators carry a makeshift globe of planet hearth during a march in Rome, Saturday, Oct. 30, 2021, the day a Group of 20 summit started in the Italian capital. Factory workers, climate activists, antiglobalization campaigners, unions, feminist groups, vaccine skeptics and political extremists are seizing the opportunity to voice anger while world’s leaders are gathering in town for the first time in presence since the COVID-19 pandemic started in 2019. (AP Photo/Luca Bruno) 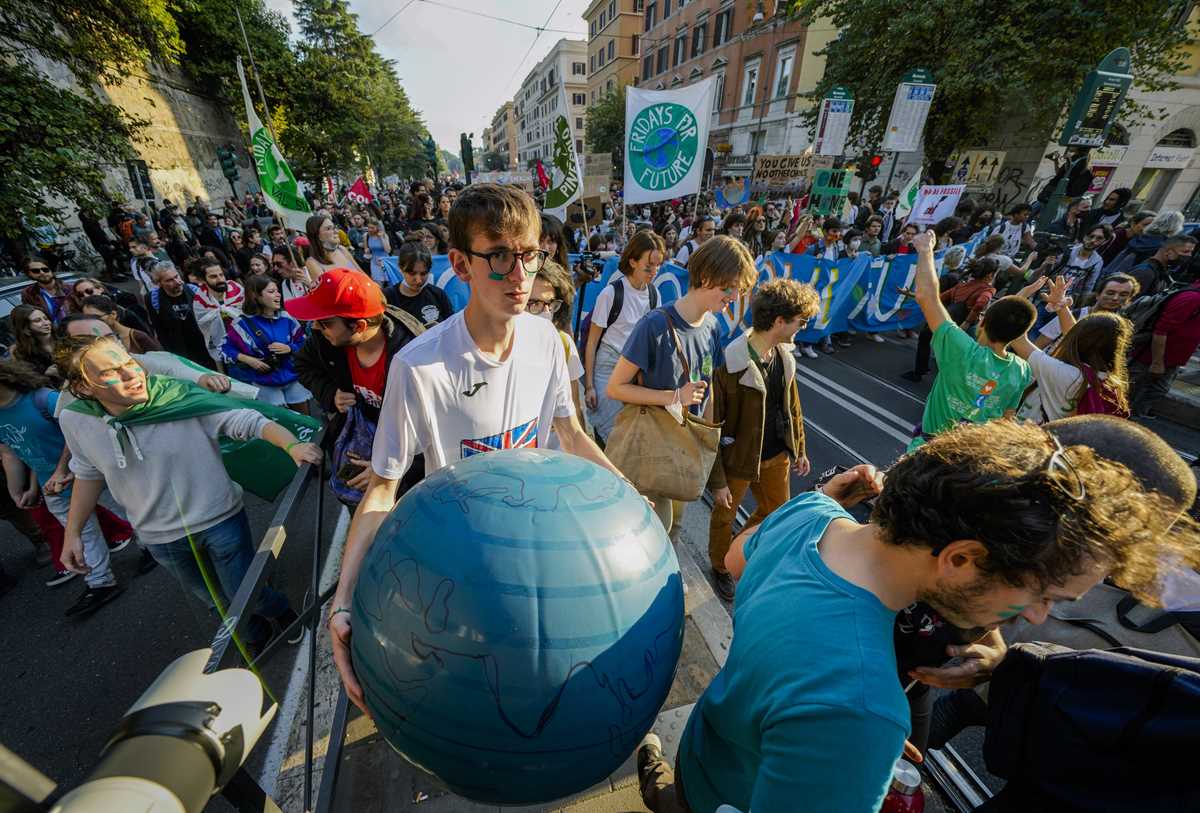 A demonstrator marches with a makeshift globe of planet earth in Rome, Saturday, Oct. 30, 2021, the day a Group of 20 summit started in the Italian capital. Factory workers, climate activists, antiglobalization campaigners, unions, feminist groups, vaccine skeptics and political extremists are seizing the opportunity to voice anger while world’s leaders are gathering in town for the first time in presence since the COVID-19 pandemic started in 2019. (AP Photo/Luca Bruno) 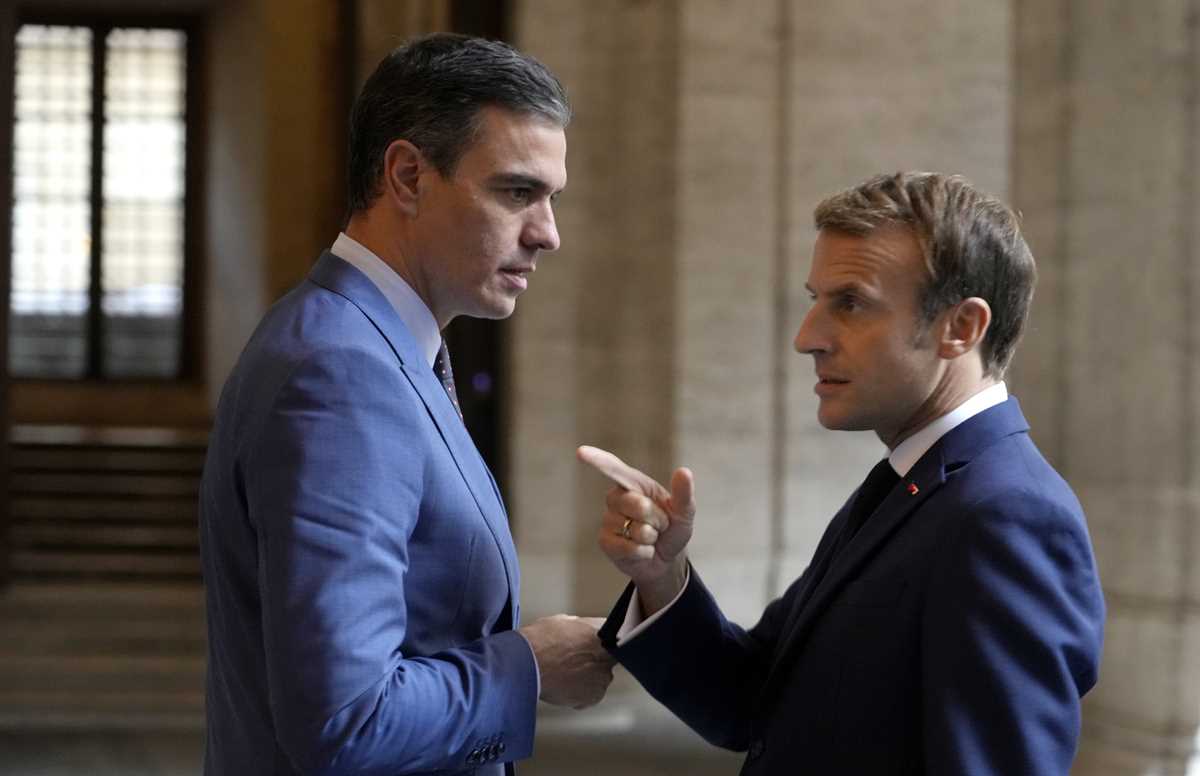 French President Emmanuel Macron, right, speaks with Spain’s Prime Minister Pedro Sanchez prior to a meeting of the European Union and the African Union at the French Embassy in Rome, Saturday, Oct. 30, 2021. (AP Photo/Gregorio Borgia, Pool)

ROME (AP) — Britain’s Prince Charles urged leaders of the world’s biggest economies on Sunday to put words into action as they tackled the global climate change crisis on the final day of a weekend summit that is setting the tone for an even bigger U.N. climate conference opening in Glasgow, Scotland.

Warning that “it is quite literally the last-chance saloon,” Charles told the Group of 20 leaders that public-private partnerships were the only way to achieve the trillions of dollars in annual investment needed to transition to clean, sustainable energy sources that will mitigate the warming of global temperatures.

“It is impossible not to hear the despairing voices of young people who see you as the stewards of the planet, holding the viability of their future in your hands,” Charles told the presidents and prime ministers gathered in Rome.

The Group of 20 countries, which represent more than three-quarters of the world’s greenhouse gas emissions, are looking for common ground on how to reduce emissions while helping poor countries deal with the impact of rising temperatures. Diplomats said negotiators, known as “sherpas,” worked through the night to try to come up with solid commitments on emissions in a final statement to be released later Sunday.

If the G-20 summit ends with only weak commitments, momentum could be lost for the larger annual talks in Glasgow, where countries from around the globe will be represented including poor ones most vulnerable to rising seas, desertification and other effects.

The future of coal, a key source of greenhouse gas emissions, has been one of the hardest things for the G-20 to agree on. However, the U.S. and other countries are hoping to get a commitment to end overseas financing of coal-fired power generation, said a senior U.S. official who spoke on condition of anonymity to preview President Joe Biden’s plans.

Western countries have moved away from financing coal projects in developing countries, and major Asian economies are now doing the same: Chinese President Xi Jinping announced at the U.N. General Assembly last month that Beijing would stop funding such projects, and Japan and South Korea made similar commitments earlier in the year.

6 stocks make up our compound income portfolio, which yields 24 dividend payments a year.

Claim our free investment report which details 6 companies in our Forever Dividend Stocks.

China has not set an end date for building domestic coal plants at home, however. Coal is still China’s main source of power generation, and both China and India have resisted proposals for a G-20 declaration on phasing out domestic coal consumption.

“In terms of their NDC, it moved forward somewhat from 2015 … but of course we expected more,” Sharma told the BBC. He added that while Beijing has pledged to stop international coal financing and reducing domestic coal “we need to see the details of that.”

British Prime Minister Boris Johnson said before the Rome summit that he tried but could not get a commitment on a coal phase-out from Xi, who did not travel to the gathering.

Climate campaigners were hoping that rich G-20 countries would take steps to meet a long-standing but yet-to-be-fulfilled commitment to raise $100 billion annually to help developing countries move toward greener economies and adapt to the changing climate.

Youth climate activists Greta Thunberg and Vanessa Nakate issued an open letter to the media as the G-20 was wrapping up, stressing three fundamental aspects of the climate crisis that often are downplayed: that time is running out, that any solution must provide justice to the people most affected by climate change, and that the biggest polluters often hide behind incomplete statistics about their true emissions.

“The climate crisis is only going to become more urgent. We can still avoid the worst consequences, we can still turn this around. But not if we continue like today,” they wrote, just weeks after Thunberg shamed global leaders for their “blah blah blah” rhetoric during a youth climate summit in Milan.

G-20 leaders also discussed the COVID-19 pandemic and the uneven distribution of vaccines in the world. On Saturday they endorsed a global minimum tax on corporations, a linchpin of new international tax rules aimed at blunting fiscal paradises amid skyrocketing profits of some multinationals.

And after a meeting on the sidelines about Iran’s nuclear program, Biden, Johnson, Germany’s Angela Merkel and France’s Emmanuel Macron made a joint statement expressing their “determination to ensure that Iran can never develop or acquire a nuclear weapon.”

They also voiced concern that Tehran “has accelerated the pace of provocative nuclear steps” after halting negotiations on a return to the nuclear agreement, formally known as the Joint Comprehensive Plan of Action.

Defensive stocks are companies that deliver consistent revenue and earnings regardless of what is happening in the broader economy. This has the effect of allowing these stocks to outperform the market when the economy is in a downturn. But it also means that these stocks are frequently overlooked during bull markets.

After all, for many investors, particularly younger investors, but the benefit of capturing a dividend is far down on their list of priorities. But it’s specifically their ability to serve as a hedge against volatility that makes defensive stocks worthy of consideration in every portfolio.

One characteristic of defensive stocks is they have a high percentage of institutional ownership. These institutions (hedge funds, large investment banks, mutual funds, etc.) are frequently referred to as the “smart money.” By putting their money into these companies it’s a sign that the company is financially sound and likely to perform well.

Defensive stocks can be found in many sectors. In this presentation, we’re giving you one pick from various sectors.

View the “7 Defensive Stocks to Buy on Market Jitters”.