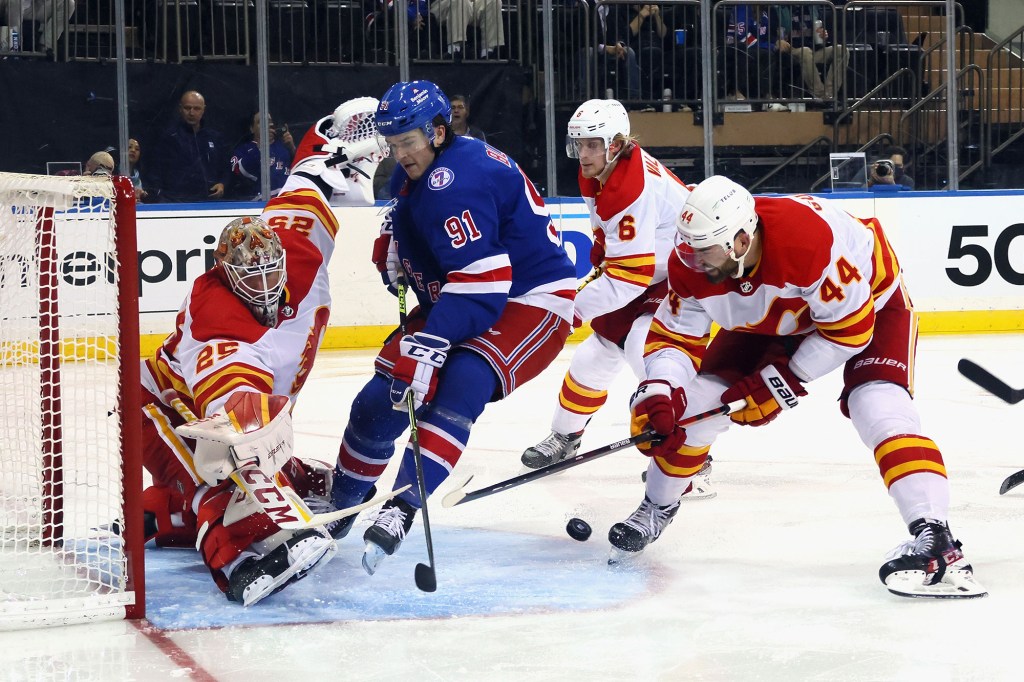 There was an ever-present sloppiness to the Rangers’ play on Monday night that no amount of grit or grind could overcome.

Maybe it was the fact that the Blueshirts have competed in seven games in 12 days, which included a four-game road trip, but the result was a disheveled 5-1 loss to the Flames at Madison Square Garden. The loss brought the Rangers’ four-game winning streak to a screeching halt.

Head coach Gerard Gallant was forced to roll with 11 forwards and five defensemen early on, after fourth-line winger Ryan Reaves and first-pair defenseman Ryan Lindgren went to the locker room with injuries in the first period.

Lindgren returned to the bench with 3:50 left in the period, but then sat out for the remainder of the opening frame. The 23-year-old defenseman made it back onto the ice in the second and was able to compete for the rest of the night. Reaves rejoined the Rangers at the start of the second period, though the veteran enforcer sat at the end of the bench next to backup goalie Alexandar Georgiev and didn’t play for the remainder of the game.

The Rangers were sloppy with the puck through the opening 20 minutes and registered nine giveaways compared to the Flames’ zero. There were certainly spurts of pressure, particularly from a makeshift line of Dryden Hunt, Kevin Rooney and Chris Kreider, who had an extended shift in the offensive zone at one point.

When Jacob Trouba and Brett Ritchie earned matching roughing penalties to ignite four-on-four play, however, the Flames struck first. Calgary defenseman Christopher Tanev found the back of the net at 18:50 off a Flames three-on-two rush.

The Rangers continued to commit turnovers throughout the night, telegraphing their passes and mishandling puck after puck. An errant pass from Patrik Nemeth went right to the Flames’ Andrew Mangiapane, who swept the puck back in for the 2-0 score at 2:09 of the second period.

Hunt put the Rangers on the board at 5:25 of the second, but the Flames answered quickly and took the air out of the Garden. Calgary’s Blake Coleman retrieved his own rebound and backhanded it past Rangers goalie Igor Shesterkin to put the Flames up 3-1.

The Flames’ No. 2 center Mikael Backlund’s first goal of the season was a dagger. Extending Calgary’s lead to 4-1, Backlund picked the corner off the rush to put the game out of reach.