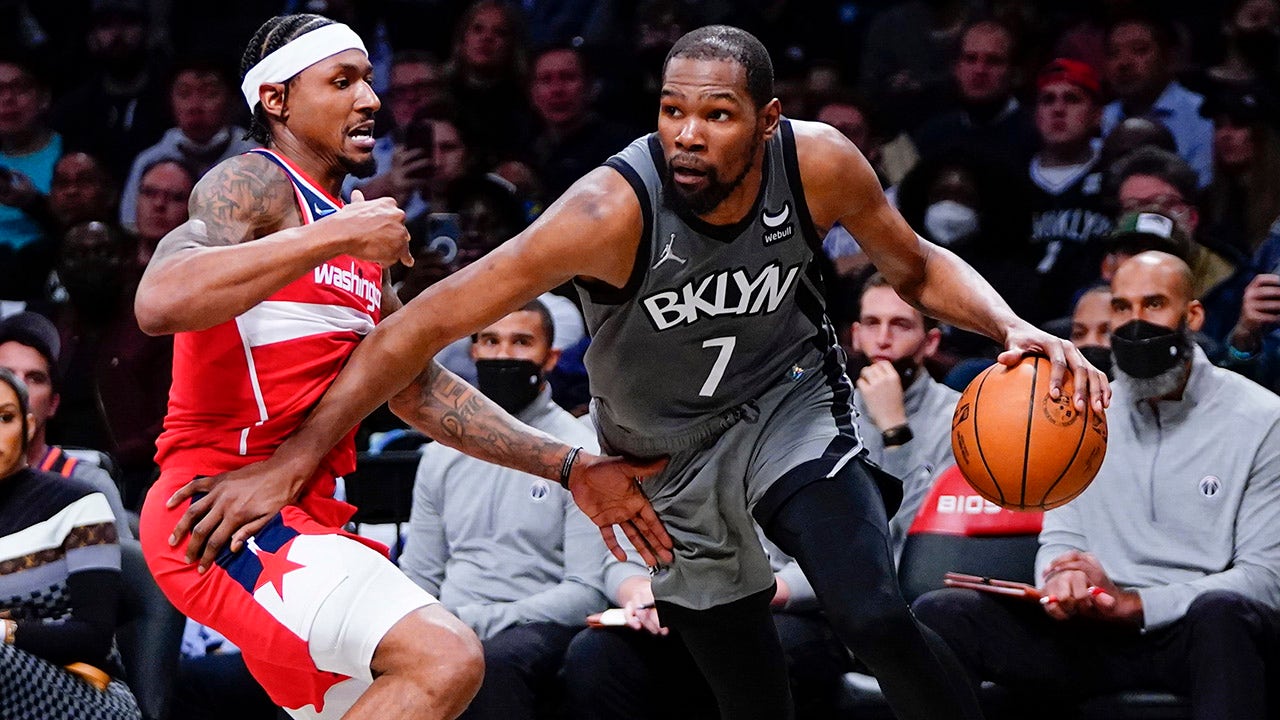 Kevin Durant scored 25 points and the Brooklyn Nets bounced back from a poor finish a day earlier with a blistering start that sent them to a 104-90 victory over the Washington Wizards on Monday night.

Patty Mills made five 3-pointers and added 21 points off the bench, while James Harden finished with 14 points, nine assists and six rebounds.

The Nets were dominated in the second half of a 111-95 loss to Charlotte on Sunday in their home opener, which featured protests by fans over the vaccine mandate that has kept Kyrie Irving from playing for Brooklyn. They overcame poor 3-point shooting nights from Harden (1 for 8) and Joe Harris (3 for 11) by holding Washington below 35% shooting.

Washington’s Bradley Beal scored 19 points but shot 8 for 22 after missing a game with a bruised right hip. The Wizards won their first two games but were already down by 18 in this one by the time the Nets honored Spencer Dinwiddie with a video tribute after the first quarter of his return to Barclays Center.

Dinwiddie shot 3 for 13 and finished with 10 points, six assists and five rebounds. He averaged 14.3 points in 274 games for Brooklyn from 2016-21 before partially tearing his ACL on Dec. 27 in the third game of the season and having surgery.

The Nets scored 38 points in the first quarter — one more than the entire second half Sunday — and led by 18 after shooting 59%.

The lead grew to 47-22 on Harden’s layup with 7 1/2 minutes left in the second and it was 59-42 at the half when Durant pulled up from a few feet behind the 3-point line with 3,8 seconds left and two defenders in front of him, grinning widely as he jogged back down the court.

The smiles briefly went away for the Nets when they missed their first nine shots of the third quarter, allowing Washington to cut it to 61-52 on Daniel Gafford’s three-point play. But the Nets answered with a 9-0 spurt, with Harden’s four-point play and Mills’ 3-pointer pushing it back to 18.

Wizards: Coach Wes Unseld Jr. said before the game that “our depth is going to win us some games,” but only Montrezl Harrell and Aaron Holiday scored off the Washington bench in the first three quarters. … Gafford had 13 points.

Unseld said it was clear when training camp opened that Dinwiddie had gotten himself prepared to play when this season started.

“He was pretty much ready to go,” Unseld said. “We saw him over the summer obviously after we acquired him and he was well ahead of schedule.”

Just not enough to have returned a couple months earlier.

The Nets badly needed help in their second-round series against Milwaukee after first Harden and then Irving were hurt. But even if they advanced, coach Steve Nash said there was no consideration to bringing Dinwiddie back.

“He had the perfect scenario in a sense,” Nash said. “Like, I think that ACLs, people say six months you can be cleared to play. I think there’s like a two-three month window after that where you should play in a safe environment before you really are committed to playing again. So, I personally didn’t like it, I don’t think anyone in our medical staff thought it was fair to Spencer and I think if it jeopardizes the situation he’s in right now, it’s just not fair to Spencer. So we didn’t bring it up.”