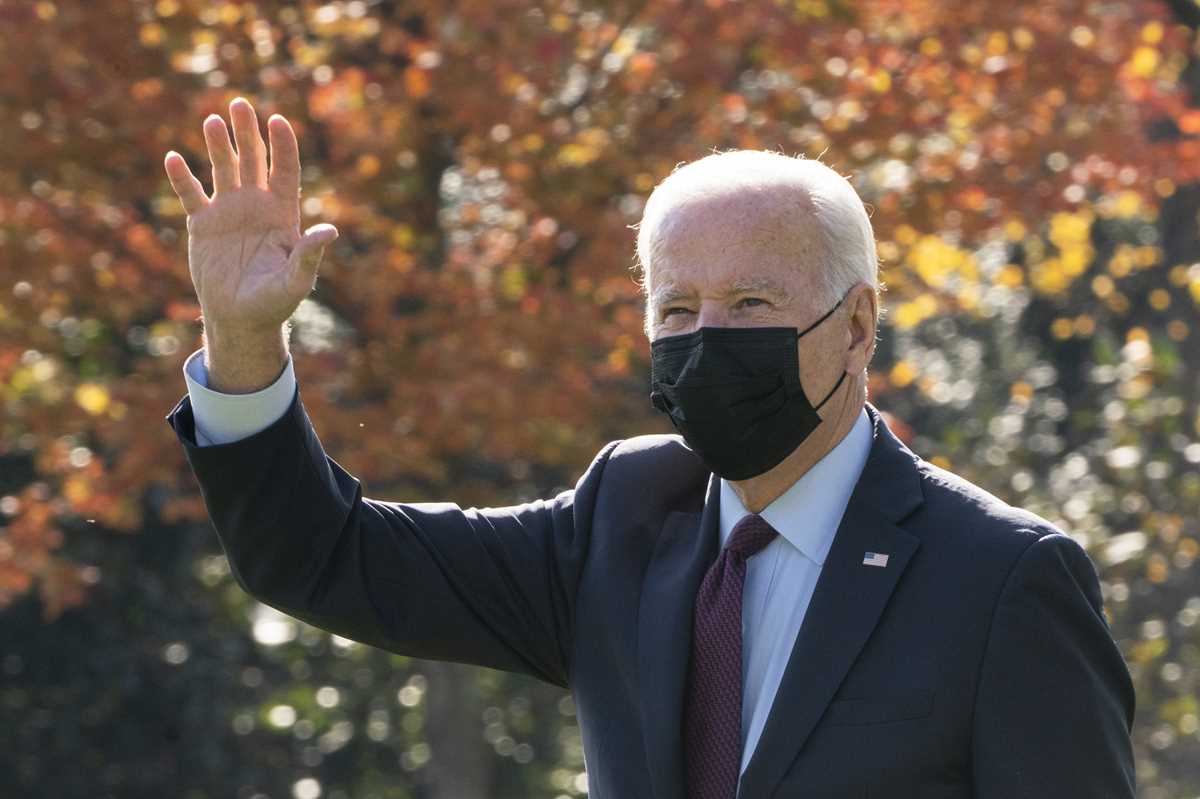 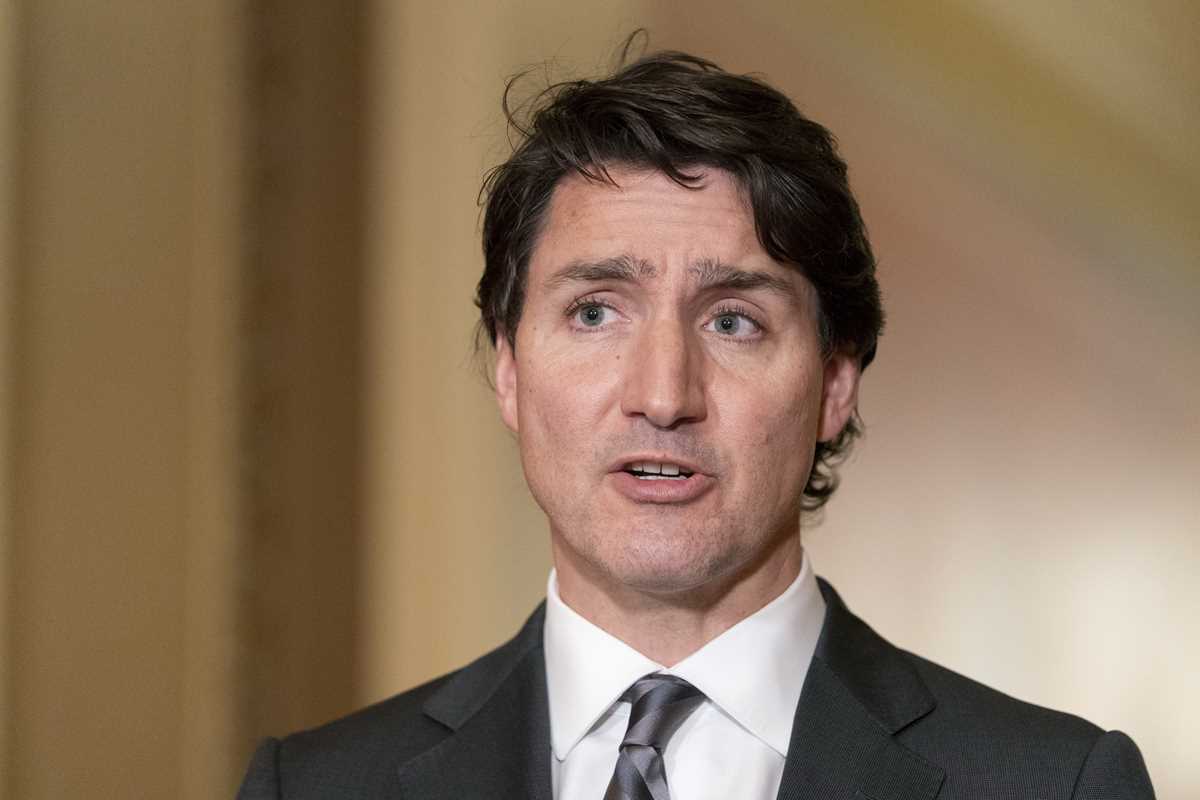 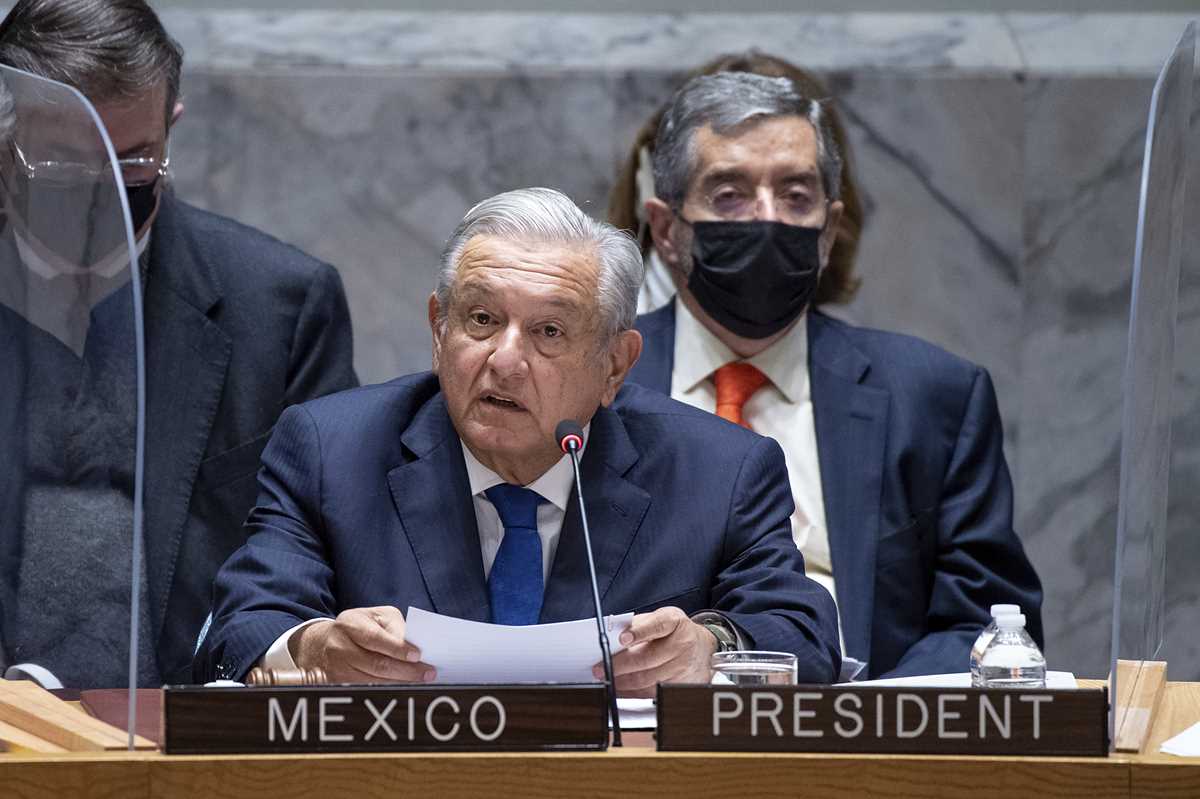 Mexico’s President Andres Manuel Lopez Obrador addresses the United Nations Security Council, Tuesday, Nov. 9, 2021. Obrador warned that the world is sliding from “civilization to barbarity” and called for the thousand richest people, the thousand largest private corporations and the 20 major economies to improve life for the 750 million people now existing on less than $2 dollars a day. (UN Photo/Eskinder Debebe via AP) 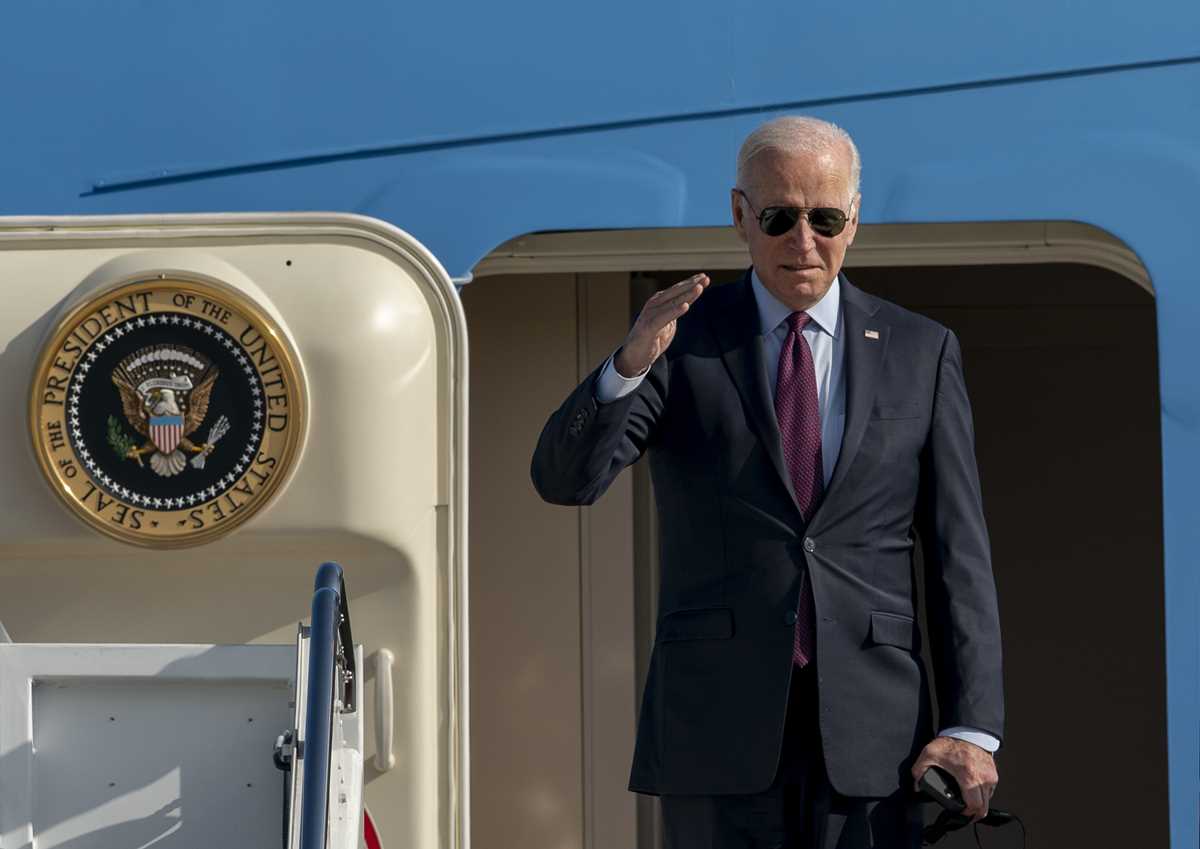 President Joe Biden returns a salute as he boards Air Force One for a trip to Michigan, Wednesday, Nov. 17, 2021, at Andrews Air Force Base, Md. (AP Photo/Gemunu Amarasinghe) 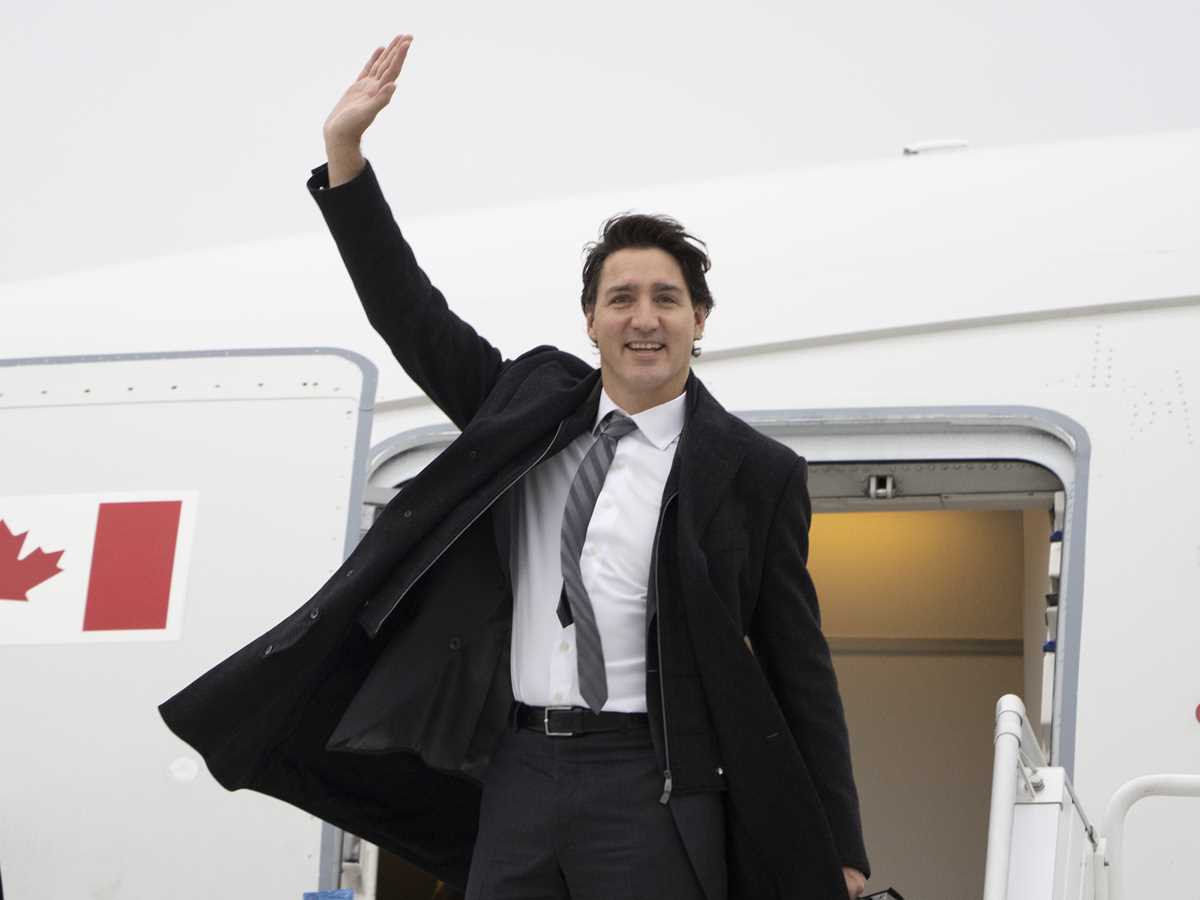 Canadian Prime Minister Justin Trudeau departs on a government plane, Wednesday, Nov. 17, 2021 in Ottawa. Trudeau is flying to Washington for meetings at the White House. (Adrian Wyld /The Canadian Press via AP) 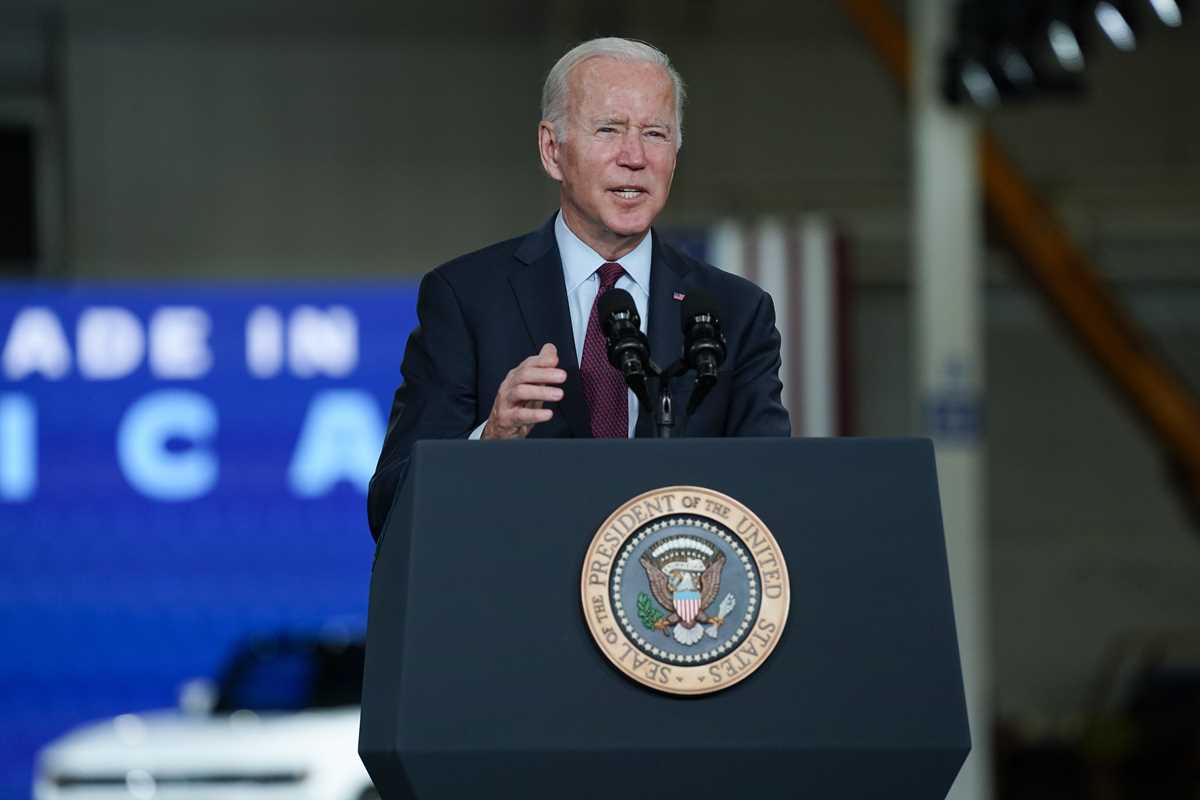 Thursday’s meetings at the White House will be the first trilateral get-together for North American leaders since a June 2016 gathering of Trudeau, Barack Obama and Enrique Peña Nieto in Ottawa. The gatherings took a hiatus under President Donald Trump, who feuded with Trudeau and Nieto during his tenure.

Biden has made some progress in repairing relations with U.S. neighbors after the turbulent Trump years. But many significant strains remain — and some new ones have emerged.

Trudeau arrived in Washington with concerns about buy-American provisions in the president’s proposed $1.85 trillion social services plan. Mexico’s priorities heading into the summit were to obtain concrete advances on immigration and more equitable access to COVID-19 vaccines.

The tradition of three-way meetings started when George W. Bush played host to Mexico’s Vicente Fox and Canada’s Paul Martin in 2005 for talks at his ranch in Waco, Texas.

Biden has already held separate virtual meetings with Trudeau in February and López Obrador in March.

Biden will meet separately with Trudeau and López Obrador again on Thursday before the leaders hold a trilateral session in the midst of what is a big week for the U.S. president. Biden signed a $1 trillion infrastructure bill into law Monday, held a virtual summit with China’s Xi Jinping that night, and traveled over the next two days to promote provisions in the big spending deal. He’s also trying to push through his social services and climate spending plan.

With the US dependent on China for the most critical resource, we use for our military, electric vehicles, and power grid…The US is facing a “National Lithium Emergency”. They are pumping hundreds of millions into sparking our lithium production. And one domestic Lithium exploration company just staked 11,700 acres of mineral claims in Nevada…

There are growing concerns in Canada about a provision in the spending plan that would offer U.S. consumers a $7,500 tax credit if they buy electric vehicles through 2026. The following year, only purchases of electric vehicles made in the U.S. would qualify for the credit. The base credit would go up by $4,500 if the vehicle was made at a U.S. plant that operates under a union-negotiated collective bargaining agreement.

Freeland said that for Canada, “Job one here in the U.S. this week is to really make our American counterparts aware of the extent to which their current approach to this issue is a problem for Canada and to really explain to them that the way they have formulated this incentive really, really has the potential to become the dominant issue in our bilateral relationship.”

The U.S. and Canada, meanwhile, have expressed frustration that López Obrador has failed to get on board with global efforts to curb climate emissions. The Mexican president skipped this month’s U.N. climate summit in Glasgow.

López Obrador’s government, for its part, wants promised U.S. development funds for the Northern Triangle countries of Central America to be firmed up. The Mexican leader continues to press the U.S. to fund an expansion of his tree planting program to Central America.

Mexico has worked with the United States — under both Trump and Biden — to control migrant flows and assist in returning migrants to Central America. The two countries are still negotiating the court-ordered re-implementation of a Trump-era policy known as Remain in Mexico, which forced asylum seekers to wait out their U.S. asylum process in Mexico.

López Obrador has also mentioned on multiple occasions his interest in the U.S. government expanding its temporary work visa program so more Mexicans and Central Americans can fill the demand for labor in the U.S. The temporary workers in turn could have access to the higher pay they seek in the U.S. without becoming part of the illegal immigration flow.

Trudeau and Biden are also expected to discuss the future of an oil pipeline that crosses part of the Great Lakes and is the subject of rising tension over whether it should be shut down. Biden is caught in a battle over Enbridge’s Line 5, a key segment of a pipeline network that carries Canadian oil across the U.S. Midwest.

Michigan Gov. Gretchen Whitmer, a Democrat and Biden ally, has demanded closure of the 68-year-old line because of the potential for a catastrophic rupture along a 4-mile section (6.4 kilometers) in the Straits of Mackinac, which connects Lake Huron and Lake Michigan. The Biden administration has not taken a position but is under increasing pressure to do so.

Canada last month invoked a 1977 treaty that guarantees the unimpeded transit of oil between the two nations.

7 Retailers That Are Bucking the E-Commerce Trend

Once again it appears that the death of brick and mortar retail appears to be exaggerated. First-quarter earnings are showing that many retailers that rely on in-person traffic for a considerable chunk of their business are seeing a rebound in sales. And many are planning to open stores in 2021.

This isn’t to say that e-commerce is going away. In fact, a common feature for many of these stocks is that they either developed or enhanced their digital footprint during the pandemic.

This special presentation focuses on retailers that are planning to add to their brick-and-mortar footprint in 2021. And some are planning to do so by a substantial margin. Once again, this doesn’t signal a transformative shift in the overall trend, but it does mean that for the foreseeable future, brick and mortar will have some relevance.

View the “7 Retailers That Are Bucking the E-Commerce Trend”.