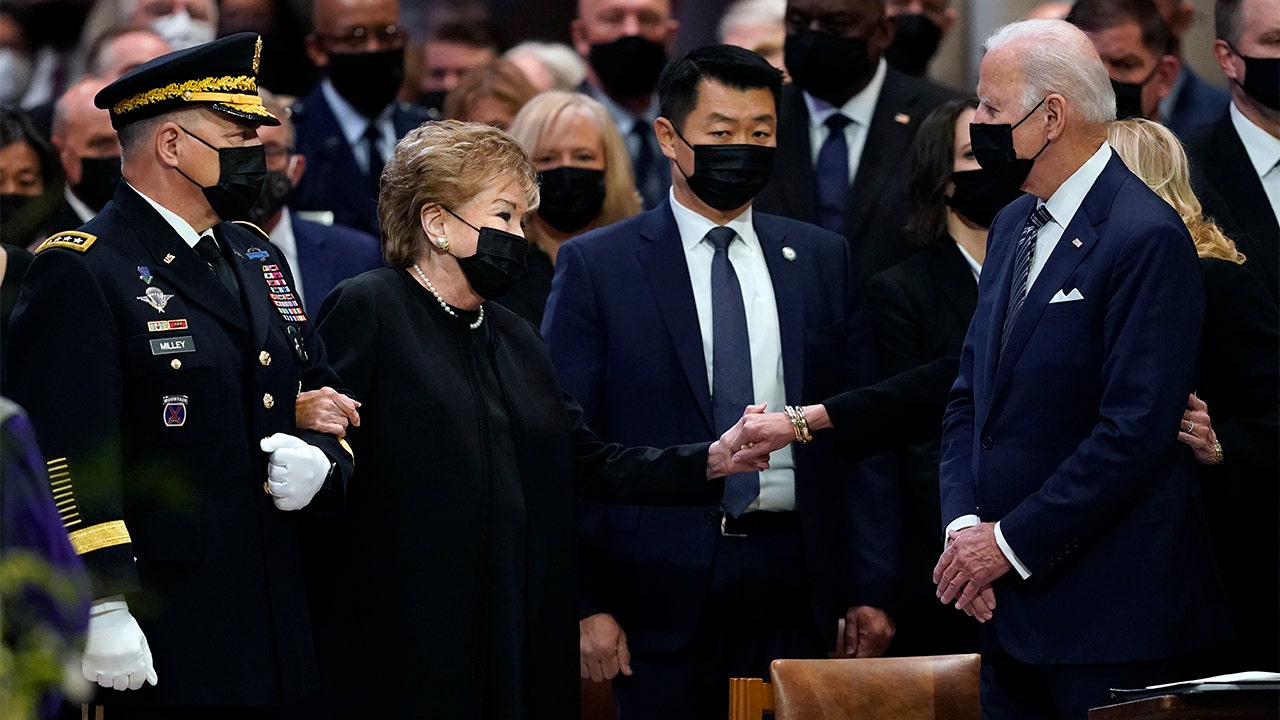 The life of former Sen. Bob Dole, R-Kan., is again being honored in the nation’s capital Friday, with ceremonies at the Washington National Cathedral and the World War II Memorial.

Dole’s casket departed the U.S. Capitol Rotunda where his body was lying in state and traveled across the city to the cathedral, where President Biden paid tribute to Dole as a “genuine hero.”

“We disagreed, but we were never disagreeable with one another – not one time that I can think of,” Biden said. “I found Bob to be a man of principle, pragmatism and enormous integrity.”

Biden, a frequent Amtrak passenger as a senator, told a story about Dole voting against defunding the railroad service. Dole was asked later about why he voted that way, according to Biden.

“It’s the best way to get Joe Biden the hell out of here at night,” Biden quoted Dole as saying.

“Excuse my language,” the president added.

Vice President Kamala Harris, former President Bill Clinton and former Vice Presidents Mike Pence and Dick Cheney are a few of the notable figures who are attending. The chaplain of the U.S. Senate, Reverend Dr. Barry C. Black, will deliver a homily.

National Cathedral is where Dole and his wife Elizabeth Dole, who went on to serve as a Cabinet secretary under two presidents and as a senator, were married in 1975.

DOLE’S BODY LIES IN STATE IN CAPITOL ROTUNDA, WHERE BIDEN, LAWMAKERS PAY TRIBUTE TO ‘GIANT OF OUR HISTORY’

Dole’s remains will then be escorted to the World War II Memorial, a site on the National Mall that Dole helped to bring into existence. He sustained serious injuries while fighting Nazi Germany in 1945 in the U.S. Army.

Dole was awarded two Purple Hearts, the Bronze Star and an Oak Cluster for his military service. In 2013, Dole told Fox News he wanted to be remembered as a “veteran who gave his most for his country.”

He left the Army as a captain and was promoted to colonel by Congress in 2019.

Dole’s body, with Elizabeth Dole and Robin Dole, will depart Washington and fly from Joint Base Andrews to Kansas, where more events are scheduled.

Biden and congressional leadership honored Dole Thursday as a “giant of our history.”

“America has lost one of its greatest patriots,” Biden said at the U.S. Capitol.

Biden urged unity as a way to honor Dole.

“Like many of us here, we disagreed on a number of things, but not on any of the fundamental things. We still found a way to work together,” Biden said. “We genuinely respected one another as colleagues, as fellow Americans, It was real. It wasn’t fake.”

Lying in state is one of the most solemn American traditions, reserved only for select prominent individuals. Dole is only the 33rd person in U.S. history to lie in state in the Rotunda. Since the turn of the century, only Rep. John Lewis, D-Ga., Sens. John McCain, R-Ariz., and Daniel Inouye, D-Hawaii, and former Presidents George H.W. Bush, Ford and Reagan have lain in state in that location.