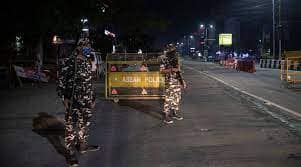 Fresh tension brewed between Assam and Mizoram along the inter-state border in Hailakandi district after a blast near a police outpost and arrest of a Mizoram policeman for his alleged involvement in it, a senior official said on Saturday.

The “low-intensity blast” took place near the Baicherra forward outpost of Assam Police at around 1:30 am on Friday, Hailakandi Superintendent of Police Gaurav Upadhyay told PTI.

The incident occurred around three months after a clash between police forces of the two North-eastern neighbours on a disputed border area in Cachar district left seven people including six Assam policemen dead.

“Our outpost was on a hillock and the blast took place just below it. After the explosion, we immediately cordoned off the area with the help of neutral central forces and started an investigation,” the Hailakandi SP said.

On Friday morning, an Indian Reserve Battalion (IRBn) personnel of Mizoram Police was found loitering in the area and he could not explain his presence there, Upadhyay said.

“We picked him up and during interrogation, we found his involvement in the blast. We arrested him yesterday and produced him in a court, which sent him to judicial custody,” he added.

The blast took place just two days after Assam Police objected to the construction of a bridge at Kachurthal area on the Assam side that was abandoned after a confrontation erupted over it in August.

“After our objection and at the Centre’s intervention, Mizoram had stopped construction of the bridge. But on October 26, they again started working on it. When we objected, they left the place without taking their equipment,” Upadhyay said.

On August 20, a few workers from Mizoram were trying to build a bridge at Kachurthal under Ramnathpur police station. Around 40-50 security personnel from Mizoram reached the site when Assam Police had objected to the construction.

Two days later, in order to assert the position of Assam and to ask Mizoram forces to retreat from the Assam side of the bridge, a party of around 200 Assam Police personnel and commandos under Upadhyay’s leadership had reached Kachurthal and the issue was settled.

“Today, the Mizoram administration came to the bridge site and dismantled the construction that they had started. They also took away all their equipment and machinery,” the SP said.

A clash between police forces of Assam and Mizoram on the disputed border area in Cachar district on July 26 left seven people – six Assam Police personnel and a civilian – dead and over 50 others injured.

The National Human Rights Commission (NHRC) on August 22 issued notices to the Centre, Assam and Mizoram over the deadly border clash between the two Northeastern states in July, stating that “grave violation of human rights” took place.

The long-standing dispute has its origin in a notification of 1875 issued during the British era that differentiated Lushai Hills from the plains of Cachar, and another of 1933 that demarcates a boundary between Lushai Hills and Manipur.

Mizoram insists the inter-state boundary should be demarcated on the basis of the 1875 notification, a corollary to the Bengal Eastern Frontier Regulation (BEFR) Act, 1873.

Mizoram leaders have, however, been arguing against the demarcation notified of 1933, claiming that the Mizo society was not consulted, while Assam wants that notification to be enforced.