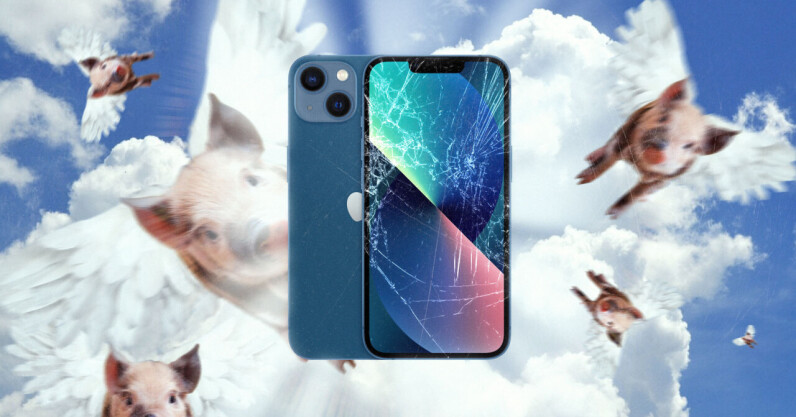 Here’s a sentence I never thought I’d write, let alone in 2021: Apple today announced Self Service Repair, a program that will allow everyday customers to buy genuine Apple repair parts and tools to fix their own broken devices, starting with the iPhone 12 and 13.

In related news, the domestic pig, Sus domesticus, has recently been spotted flying south for the winter.

Seriously though, my mouth was agape as I read Apple’s press release. I can still hardly believe it as I type this.

Apple notes that the program, which begins in early 2022, will initially focus “on the most commonly serviced modules, such as the iPhone display, battery, and camera.” Apple’s Self Service Repair Online Store will include over 200 parts and tools to start, and the company will add more repairable items later next year.

Apple will also provide customers with repair manuals so they can be best prepared to make these fixes, rather than following a third-party guide that may be less reliable. Used parts can be returned to Apple for recycling, including credit toward Apple purchases.

But more than just Apple, it’s potentially huge for tech consumers of all ilks. I’m no Apple fanboy — in large part because of its prior stances on repairs — but there’s no denying the company has an unparalleled influence on the tech industry. This move all but guarantees that other hardware makers will follow suit, and that is a wonderful, wonderful thing.

Okay, I know I shouldn’t get my hopes up too much. Just because Apple is giving consumers access to repair tools, doesn’t mean the company will actually design its devices to be easier to repair. I don’t expect the iPhone 14 to end up like Fairphone or the next MacBook Air to be like the Framework laptop. Nor do I think Apple should just abandon aesthetics for the sake of repairability.

But it needn’t be so black and white. We’ve already seen signs of hope from Apple too, such as the fact that it’s substantially easier to replace the battery on the new MacBook Pros. And ultimately I don’t care as much about a device being intuitive to repair so long as the manufacturer is willing to walk consumers through the process.

That seems to be the approach Apple is taking. It is perhaps the biggest victory for the right-to-repair movement in recent memory, and it just goes to show that sometimes, putting pressure on the big companies can actually make a positive impact.

Thank you Apple, that’s all we’ve been asking for all this time. I feel like I’m living in a bizarro world. I’ve been a lifelong Windows guy, but Apple has been consistently addressing some of my biggest complaints about it product culture recently. What happened to the company that sacrificed functionality for design, overcharged for average performance, and was hostile to almost any user repairs?

Between the new MacBook Pros with ridiculous performance and (gasp!) ports and this decidedly consumer-friendly turn regarding repairs, my respect for Apple has never been higher.