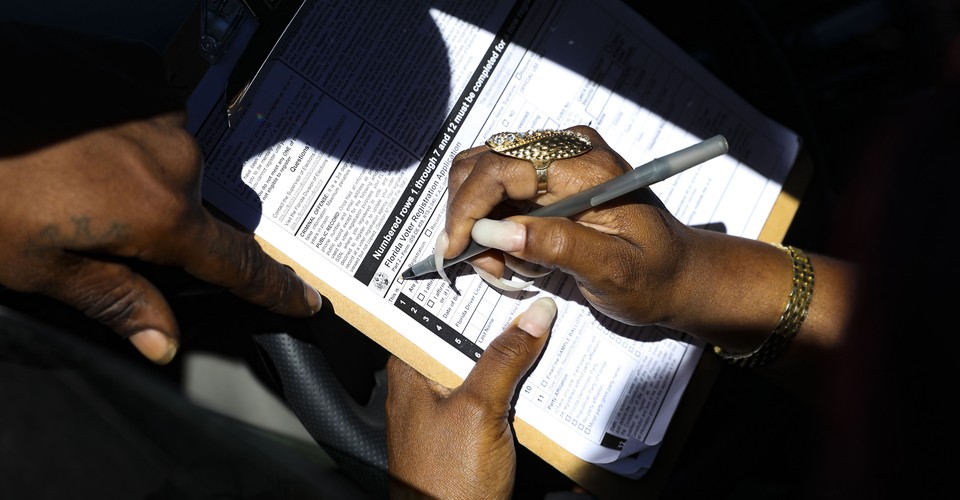 The state of Florida is silencing those opposing its efforts to disenfranchise its own citizens.

A lawsuit filed by a coalition of civil-rights groups contends that Florida’s Republican-controlled government has repeatedly attempted to restrict the franchise, including curtailing third-party registration campaigns, cutting early voting, and imposing an onerous poll tax on formerly incarcerated Floridians after the state voted overwhelmingly to restore their rights. The more recent restrictions involve a series of “measures that prohibit or restrict access to the ballot and voting mechanisms that Black and Latino voters used to great effect in the 2020 elections.” The GOP has chosen this path despite Republican gains among both groups in the last election.

As Florida prepares to defend these new voting restrictions in court, it has prohibited three University of Florida law professors from testifying about the restrictions’ impact. “University officials told the three that because the school was a state institution, participating in a lawsuit against the state ‘is adverse to U.F.’s interests’ and could not be permitted,” The New York Times reported. The university has reiterated its commitment to “free speech” and defended its actions by arguing that the professors were merely barred from undertaking “outside paid work that is adverse to the university’s interests as a state of Florida institution.” Under this definition of free speech, you may speak as long as you say nothing the state has forbidden you to say.

This decision is of a piece with the censorship campaign that has swept Republican-controlled states that have attempted to outlaw the teaching of the history of racial discrimination in America in public schools. At the core of this panic is a sentiment similar to the falsehood of “negro tyranny” used to justify the violent overthrow of the Reconstruction governments in the 1870s. As the Black vote was seen by reactionaries as oppression of whites then, an accurate accounting of America’s history of racial discrimination is seen by their ideological descendants as bigotry against white people today.

Florida’s move to censor academics employed by its state university makes clear that, for many, the arguments about free speech that have dominated the political conversation over the past few years have never truly been about the right to speak. They have, instead, been about providing a predicate for conservatives to use the power of the state to settle political arguments. The campaigns of censorship and disenfranchisement must thus be understood as two halves of the same whole. The former erases the historical memory of the effect such restrictions have had in the past, and the latter prevents the public from acting on the knowledge of the discriminatory past that GOP leadership is attempting to erase.

The triumphant Democrats who rewrote Florida’s constitution in 1885 knew enough not to leave a paper trail. At the constitutional convention, the historian Edward C. Williamson wrote, they rapidly squelched a suggestion to have the proceedings transcribed.

Their aims, however, were nonetheless clear: “the disenfranchisement of the Negro and the obliteration of the Republican Party of Florida.” In the aftermath of Reconstruction, through devices such as poll taxes, literacy tests, and the white primary, and extralegal methods including terrorism and intimidation, Black men in Florida were stripped of the franchise. As the historian Darryl Paulson has written, “between laws passed by the Legislature and the adoption of the 1885 Constitution, almost every black vote was eliminated.” When my mother was born in Tampa, this was the law of the land. My grandparents could not vote. Most of the country was fine with that.

Despotism was imposed by law but sustained by a propaganda campaign that would justify the falsehoods on which the new society was built. Newspapers and politicians, not just in Florida but across the country, lamented the supposed unfitness of the Black man for the ballot and portrayed his enfranchisement as a threat to the nation. Redemption governments ensured that local schools, which in many cases had been built by the Reconstruction governments the Redeemers had destroyed, “taught young children that the ‘Redeemers’ had saved the state from the excesses of Reconstruction.” The flawed but admirable attempt to build a multiracial democracy in the South was thus rewritten as despotism, while those imposing a racial autocracy were celebrated as heroes.

“Propaganda was furthered by a sensational press that played up and headlined current stories of Negro crime, charges of rape and attempted rape, and alleged instances of arrogance, impertinence, surly manners, or lack of prompt and proper servility in conduct,” the historian C. Vann Woodward wrote in The Strange Career of Jim Crow. “It was quite common in the ’eighties and ’nineties to find in the Nation, Harper’s Weekly, the North American Review, or the Atlantic Monthly Northern liberals and former abolitionists mouthing the shibboleths of white supremacy regarding the Negro’s innate inferiority, shiftlessness, and hopeless unfitness for full participation in the white man’s civilization.”

This propaganda campaign was a necessary element of the reimposition of white rule in the South. There had to be a reason to justify the apparent contradiction of basic principles of popular sovereignty. The white Democrats in the South had to give themselves permission to do it, and the white Republicans in the North had to give themselves permission to look away. The disenfranchisement of Black Americans in the South lasted until the Voting Rights Act of 1965. Since then, a right-wing majority on the Supreme Court that believes that anti-Black racism is a thing of the past has drastically weakened voting-rights protections, leading to an avalanche of novel voting restrictions targeting the constitutional rights of communities the law was meant to enfranchise.

The political leadership of Florida is today gripped by a new “lost cause.” Despite the fact that Donald Trump triumphed in the Sunshine State in 2020, in an election that Governor Ron DeSantis called “the smoothest, most successful election in the country,” the Republican-controlled legislature imposed a series of new voting restrictions in the aftermath of the election. The impetus for these restrictions was the falsehood that Trump had won reelection but had been deprived of victory by “voter fraud.”

Trump, along with his allies in the right-wing media, has inundated conservative voters with ludicrous claims that the election was “rigged.” These claims cannot be proved because they are false; in fact, the Trump camp has always known that they were false, and that their supporters would believe them nonetheless. The allegations, though, need not be substantiated in any factual sense, because they are fundamentally an expression of the conviction that Trump should have won, not because he actually won the most votes but because the other side’s votes simply should not count. This belief justifies not merely restrictions on the right to vote but the right to simply overturn elections, as Trump supporters attempted to do when they ransacked the Capitol on January 6.

The novel restrictions cannot be a solution to endemic voter fraud, a problem that DeSantis’s boasts implicitly acknowledge does not exist. They are a solution to a different problem: the fact that the other side gets to vote at all.

None of these attempts to restrict the franchise has been as overtly racist or close to as successful as the efforts of the Redeemers. But as long as the risk of competitive elections exists, a party driven by the belief that its rivals are illegitimate will seek to eliminate them. That this effort is today led by the Republican Party, during Reconstruction the defender of Black rights in the South, is one of history’s great and tragic ironies.

Florida’s rule limiting the teaching of this history is not the worst of the state-level efforts at censorship—it states that teachers “may not suppress or distort significant historical events, such as the Holocaust, slavery, the Civil War and Reconstruction” but also bars them from teaching that “racism is embedded in American society and its legal systems in order to uphold the supremacy of white persons.” It is obvious that the former cannot be taught without recognizing the history of the latter, and that under the ambiguous wording of the rule, teachers will fear that doing so will risk professional consequences.

But to acknowledge this history would be to raise uncomfortable questions about its legacy in the present. Rather than doing so, this movement has settled on the belief that its fundamental political rights are threatened when those its members fear exercise their own. In the name of “free speech,” Florida censors its educators; in the name of “democracy,” it disenfranchises its citizens. This is because, as Florida’s so-called Redeemers understood, power does not need to resolve its contradictions when it can simply silence them.