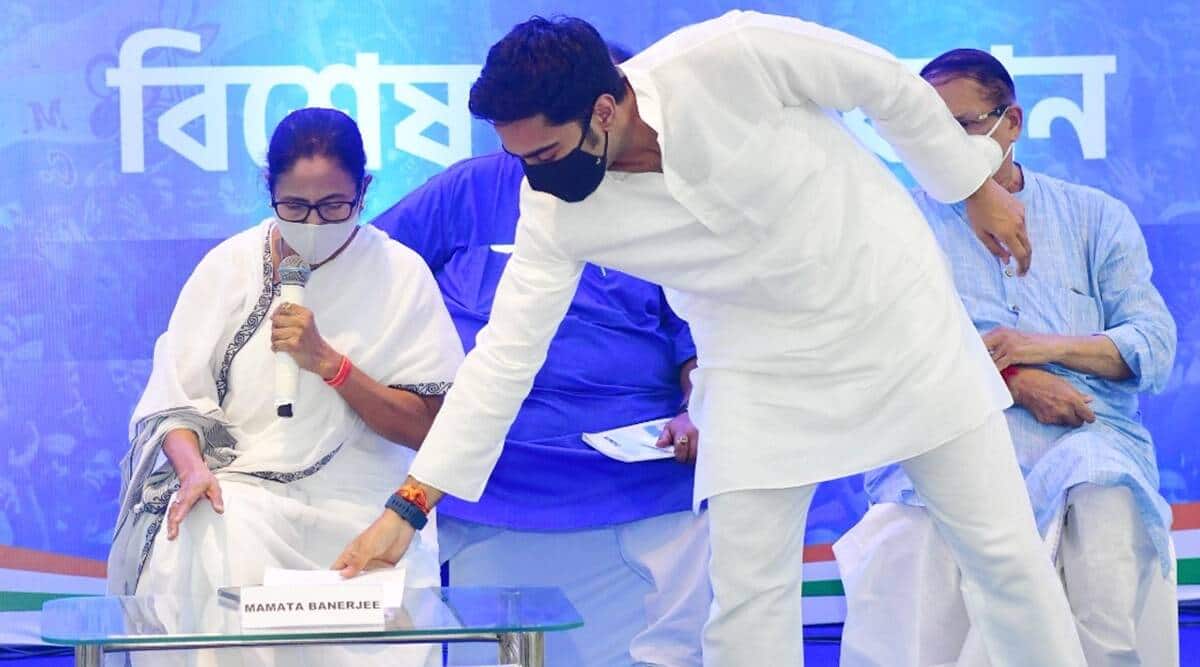 In his controversial remarks against the opposition BJP, TMC national general secretary Abhishek Banerjee on Monday likened the saffron party to a “virus” and claimed that Chief Minister Mamata Banerjee was the “vaccine” against it.

Addressing a public meeting for the Dinhata bypoll in Cooch Behar, Abhishek urged people to administer the first vaccine dose against the BJP on October 30 and the second in the 2024 Lok Sabha polls.

“Covid-19 is a virus and there is a vaccine for it, which is called Covishield or Covaxin. Just like corona is a virus, the BJP is also a virus, and Mamata Banerjee is the vaccine against the BJP. Administer the first dose on October 30 and the second in 2024,” said Abhishek.

In response, BJP spokesperson Shamik Bhattacharya called the TMC a virus. “In 1998, a virus (TMC) was born from the Congress in West Bengal, which is now creating trouble for others. We don’t know what is the antidote to this virus.”

Besides Dinhata, bypolls will be held at Shantipur, Gosaba and Khardah on October 30, and the results declared three days later. Bypolls to Dinhata and Santipur were announced as two MPs Nisith Pramanik and Jaganath Sarkar did not take oath as MLAs after winning the state Assembly polls earlier this year. Bypolls to Khardaha and Gosaba were necessitated following the death of TMC MLAs.

Positioning his party as a crucial player in other states, the TMC MP exuded confidence that the TMC would come to power in Goa after the Assembly polls there. He also said that within a month, the TMC would make its presence felt in five to seven other states.

“The TMC cannot be now contained within West Bengal. We have gone to Tripura and Goa and within a month we will go to five to seven other states. There are 40 Assembly seats in Goa, and the TMC is starting from zero. Today, I am telling you that the Assembly polls will be held in three months, and the TMC will form the next government there after the election. Next will be Tripura, Assam, Uttar Pradesh and other states,” said Abhishek.

MLA and Leader of the Opposition in the state Assembly Suvendu Adhikari dared the TMC to first field candidates in the Tripura civic polls. “First let the TMC field candidate in all the seats in Tripura civic polls, then he should speak about conquering other states. Those who do not know how to take care of one state is thinking about others.
The TMC has no support other than members of one community and state police,” said Adhikari.

Abhishek hit out at the BJP for allegedly polarising the upcoming state bypoll to four constituencies by using violence against Hindu minorities in neighbouring Bangladesh as a poll plank.

Abhishek accused BJP leaders Nisith Pramanik and Jagannath Sarkar, who were elected from Dinhata and Shantipur in the recent Assembly polls, of “disregarding people’s verdict”.

“BJP candidates Jagannath Sarkar and Nisith Pramanik resigned as MLAs after being elected by people earlier this year. But they had resigned to keep their MP posts. They had done this as they thought that they would become ministers once the BJP wins Bengal. But their party failed and they later resigned to retain their post as MPs. They disregarded the verdict of people,” he said.

In the recent reshuffle by Prime Minister Narendra Modi, Pramanik was made Union Minister of State for Home and Sports.

Taking a pot shot at central BJP leaders for visiting the state before elections, Abhishek said, “BJP leaders used to visit Cooch Behar regularly before and during the Assembly polls, but they have stopped coming after their electoral defeat. They had made false promises of a Narayani Sena in the Central Forces, but Mamata Banerjee has kept her promise of creating a Narayani battalion.”

Asserting that the TMC would make a ”4-0 sweep” in the October 30 bypoll, the Diamond Habour MP said, “’The entire country and its people are eagerly awaiting the bypoll results. They want a leader like Mamata Banerjee. That is why they are saying as ‘Desh ki netri kaisi ho, Mamata didi jaisi ho’.”

Reiterating his attack against Opposition national parties, including Congress, for bowing down before the BJP, Abhishek said Mamata was emerging as the “undisputed leader against the saffron camp”.

”There are several other national parties. But all of them have failed to put up a fight against the BJP. Under pressure from Central agencies, the Congress has surrendered before the BJP in the last seven years. It is only the TMC that has not been cowed,” he said.