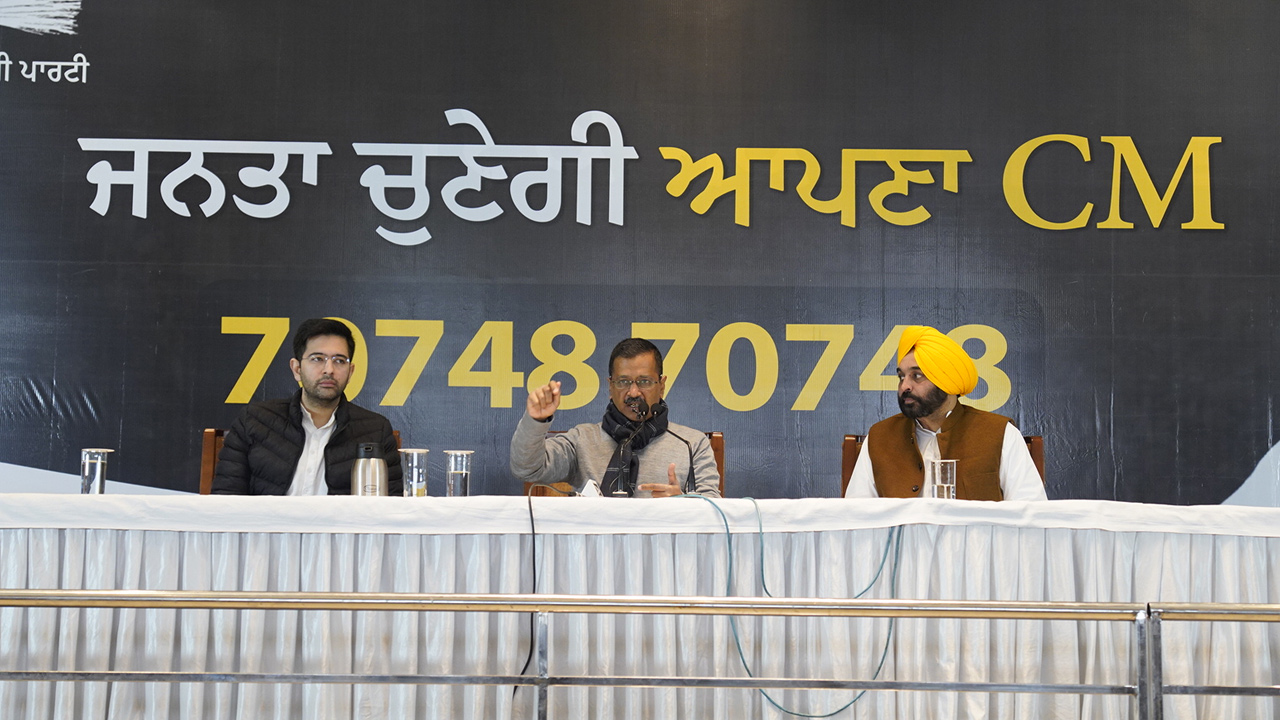 NEW DELHI/PUNJAB: After insurmountable hard-work, dedication and honesty the Aam Aadmi Party has emerged as a bonafide leading contender for Punjab Polls, under the leadership of National Convenor and Delhi CM Shri Arvind Kejriwal. Today, Shri Kejriwal announced AAP’s game-changing strategy for Punjab elections announcing that for the first time in India, the public will vote and decide the party’s CM face. He stated — People of Punjab can vote for the name of CM face of their choice by SMS, Call or WhatsApp on 7074870748 till 17th January 5PM. It is almost certain that the Aam Aadmi Party government will be formed in Punjab and the CM face of AAP will be the next CM of Punjab. After 1947 so many elections have been held, till date no party has had the guts to ask the public who their CM face should be? In a historic first, the Aam Aadmi Party is asking the public who should be their CM face; whoever the public votes for will be made the CM. Aam Aadmi Party will announce its CM face on the basis of the response of the people itself. All the surveys are stating that the Aam Aadmi Party will get 57 to 60 seats and only a push from the public is needed to form the government. I appeal to all the residents and volunteers of Punjab, give a strong push so that AAP gets at least 80 seats, and not just 60. I wanted to make Bhagwant Mann the CM face, but he said that no, people should choose their CM face. At the same time, AAP MP and Punjab Convenor Shri Bhagwant Mann said that the Chief Minister looks after the joys and miseries of the people of the state, if the people choose their CM face, then they will trust their CM too.

Addressing a press conference in Mohali during his Punjab visit, Shri Arvind Kejriwal said, “All TV channels are conducting surveys in Punjab to estimate how many seats which party will get in the upcoming elections. All surveys present Aam Aadmi Party to be the single largest party, with some estimating 57 seats, some 58, some 60. It feels like we’ve almost reached the finish line and just need a slight push across it now. I want to ask all our volunteers to move for the last big push towards the finish line now. To the people of Punjab I appeal, we need your final push with full force now. On the poll day, vote for us with such enthusiasm that we don’t just cross the finish line but win with a thumping majority. There are still a couple of weeks left for campaigning so I’d ask everyone to go in with full energy to make this possible.”

He added, “It is almost certain that AAP will form the next Punjab Government. This means that whoever AAP’s CM face is, will be the next CM of the state. So to take that call, we invite the public. Usually you see these old political parties fielding their sons and daughters if not other family members in the CM frays. Bhagwant Mann Ji is very dear to all of us. He’s like my younger brother. He’s the most towering leader of the party as well. When we were sitting together I proposed why not Bhagwant be made the CM candidate. Bhagwant instead refuted and said that the public should take a call on it. He said whatever responsibility the public gives him he’ll happily take but the trend of choosing CMs behind closed doors should end.”

He concluded, “We are issuing a number 7074870748 on which one can cast their vote. Our country has seen hundreds of polls since independence. Not one party has had the might to ask the public who they should make the CM. In a historic first we are going to ask the public that we are certain of forming the government but we need you to choose the CM. You can SMS, WhatsApp or leave a voice message on call through this number and tell us your choice. The line will be open till the evening of 17th January. Post 5PM on the 17th all votes will be collated and calculated based on which we will announce our CM face. This time the public will elect the CM itself.”

At the same time, AAP MP and Punjab Convenor Shri Bhagwant Mann said, “CM Sahib told me that your name can be declared as the CM face. But I told him that usually parties force a CM face on people and do not ask their choice. For five years only the CM has to go look after the happiness and misery of the people so why not ask the public which one of the leaders of the Aam Aadmi Party do you want to be the CM. So if people choose, they will have faith that CM is their choice. Therefore, the trust of the public should be secured for the CM face. For this we are issuing a mobile number 7074870748. On this, one can SMS, call or WhatsApp message to choose the Chief Minister’s face of their choice. I am a true soldier of the Aam Aadmi Party. Even if my duty is pasting posters, I will do that too. If my duty is to sweep the streets, then I will do that too. Punjab is important to me. That’s why I don’t have any desire to become the CM. I am very grateful and thankful that CM Arvind Kejriwal has given me a lot of respect and trust.”