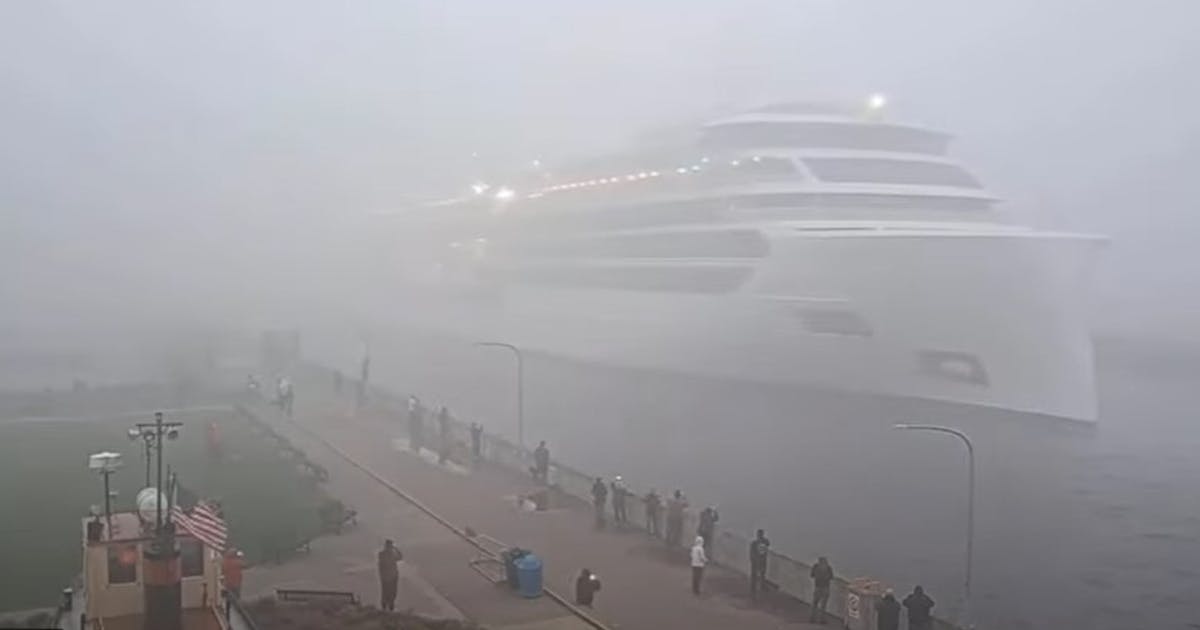 The Duluth Harbor Cam captured the arrival of the Viking Octantis, which was enshrouded in fog as it floated into the harbor. The newly constructed luxury ship, which holds nearly 400 passengers, is touring the Great Lakes all summer.

A dozen local people gathered by the city’s new customs facility at the Duluth Entertainment Convention Center (DECC) to greet visitors with “Welcome to Duluth” signs, goody bags and poppies in honor of the holiday.

“Several people were like, ‘Oh, my goodness, we’ve never been welcomed anywhere.’ They took selfies with us,” said Lucie Amundsen, communications director for the DECC. “I think the fact that people turned out, even though it was raining and cold, meant a lot to them.”

A tender vessel ferried passengers from ship to shore in groups of about 50, Amundsen said. Guests split off to enjoy a variety of excursions, such as a trip to Hawk Ridge Bird Observatory and a local beer-and-chocolate tour.

The eight-day “Undiscovered Great Lakes” cruise started in Thunder Bay, Ontario, and will finish in Milwaukee. The ship will also stop at the Apostle Islands in Wisconsin, as well as Houghton and Mackinac Island in Michigan.

Six more sold-out Viking cruises will visit Duluth this summer. Tickets are already on sale for 2023 trips, with prices starting at $6,700 per passenger.

St. Paul will also start welcoming Viking cruises this summer as part of a Mississippi River tour. Two additional passenger ships from American Queen Voyages are slated to stop in Duluth this year on a tour that starts and ends in Chicago.

Amundsen plans to organize future groups to greet arriving ships after hearing from about 50 people who expressed interest in being a “Duluth ambassador.”

“I think that there’s a subset of Duluthians who really know what we have here, who just want to show people what we love about this place,” she said.

“Memorial Day is a somber holiday, and it didn’t feel right to me to make this a party,” Amundsen added, though she has visions for more festive celebrations (perhaps featuring music and lawn games) for future cruise arrivals.

Tourists appeared to hail from all over, said Amundsen, who spent time with a pair of sisters from California who were looking forward to variety of activities in Duluth. They started their day at the Great Lakes Aquarium.

“Some people looked a bit chilly and like they could have been more hardily dressed,” Amundsen said. But by midafternoon the sun poked through the clouds, giving visitors a taste of the weather that makes the Minnesota winters worth it.