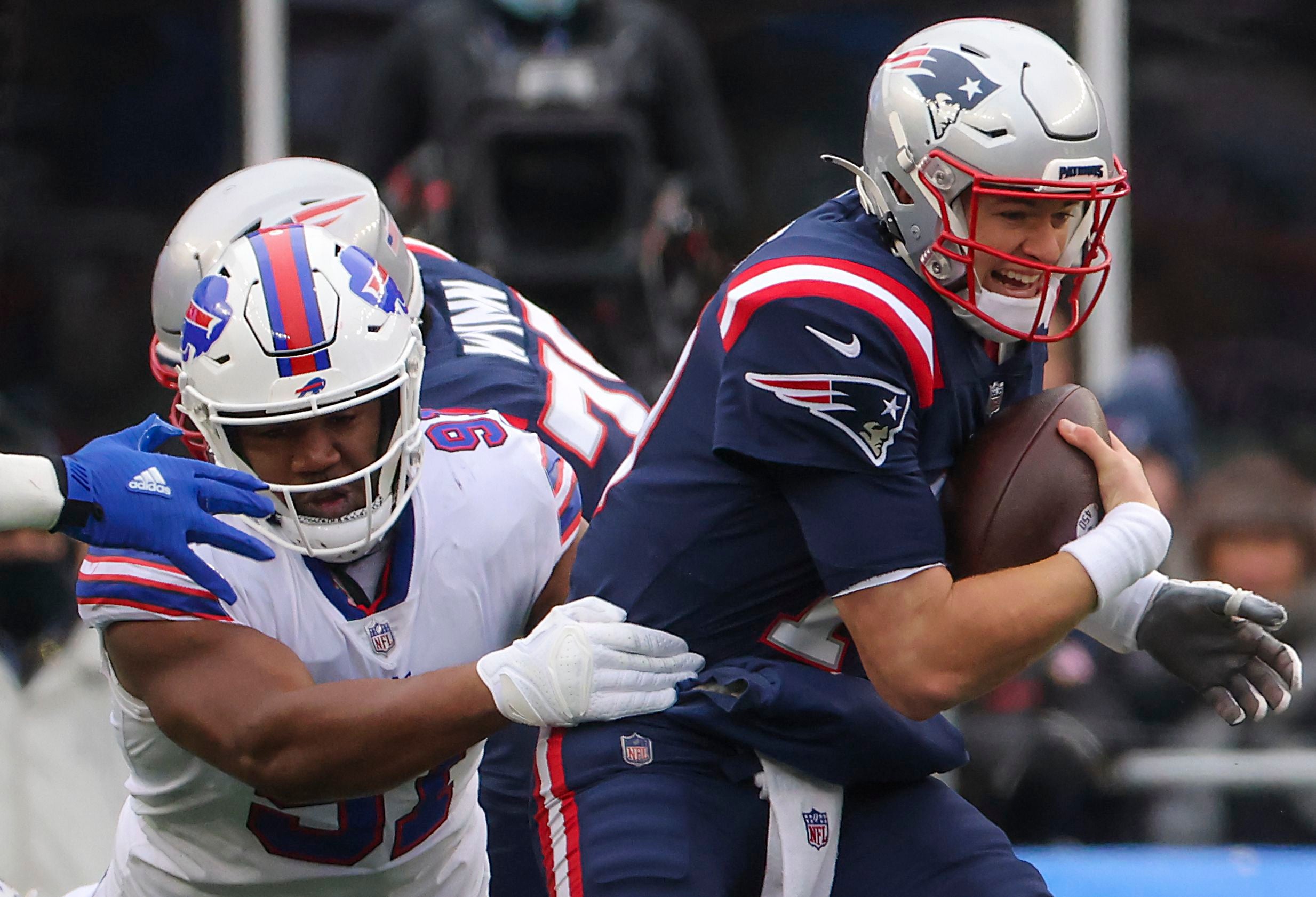 Shortly after watching his team lose Sunday, Patriots head coach Bill Belichick took to the podium and seemed even grimmer after a loss than usual.

Belichick’s monotone delivery was still detectable after the 33-21 loss to the Buffalo Bills, knocking the Patriots out of the top spot in the AFC East in the process. But it was also accompanied by a tinge of sadness, almost as if the coach were given some bad news just before entering the press briefing. He was even cordial, or, at least sympathetic, to a reporter who asked him to share his New Year’s resolutions. She still has her head this morning because Belichick declined to bite it off.

There was a hint of emotion during Belichick’s press conference, which suggests the coach came to the same realization about his team as we all did, watching the Patriots drop their second-straight game and go from playoff shoo-in to battling for a wild card spot.

This is who they are.

After weeks of unjustly comparing the 2021 New England Patriots to their 2001 predecessors, the current iteration finally has an identity of its own. Unlike the Lombardi-hoisting darlings, the present-day Patriots are collapsing to their reality.

On Sunday, the Bills played like a team that should be mentioned as a Super Bowl contender, while the Patriots played like one that still has some growing pains. Josh Allen performed like an MVP-caliber quarterback while Mac Jones looked more like a 23-year-old rookie. Holes were exposed in the Patriots’ defense, while Buffalo took the inside track at winning a second-straight division title.

One day after Christmas, it appeared as if the magic had run out.

Not to write a eulogy for the team, seeing as it is still in prime position to make the postseason, but the last two weeks have delivered a dose of reality to a football season that gave a rebirth to the possibilities surrounding the long-term health of the Patriots franchise. In the wake of a dreadful 2020 season, this year’s Patriots gave hope when it seemed being competitive might still be a few seasons away. The success of the team this season tore some eyes away from everything happening in Tampa Bay, reminding Patriot fans that their team still had reason and possibility. In many ways, Patriot fans had their own re-birth this season, demoralizing fan bases across the country who thought the obnoxious days of New England hierarchy were behind them with Tom Brady in Florida.

It was a fun season that had us all, perhaps, foolishly conjuring scenarios for how it all might end.

The Kansas City Chiefs, Bills., Buccaneers, and Green Bay Packers should be hanging “Super Bowl or Bust” banners across their locker rooms.

Suggesting these Patriots might have been in the same class was clearly born from the emotional attachment that came from two decades of watching the team dominate the rest of the league. That was the norm, and it felt comforting to get back to that, all with the novelty of the shiny, new toy.

Yes, there were reminders of 2001, but comparing any team to that one is like trying to find the redeeming qualities in “Caddyshack 2.” Keep trying to tell yourself it’s the same movie, even if the reality of the situation keeps trying to rear its ugly head.

Jones has proven he can manage the leading role with more grace that Jackie Mason, but he’s also shown to be a rookie QB lately. Which is, you know, what he is.

There’s a reason no rookie quarterback has led his team to the Super Bowl, and that was on display Sunday when Allen helped put his team back into the discussion of the best teams in the NFL. What Jones has managed the last two weeks, ever since being asked to throw the ball three times in Buffalo, is that he might have a plucky comeback gene in him. That’s nice. It’s a welcome development.

But it isn’t ready. Not yet.

Now, instead of dreaming about hanging onto the first-round bye, the Patriots need to beat the Jacksonville Jaguars at home this weekend in order to stay alive at all. With two weeks left in the season, there will be no “hat and t-shirt” game to seal a division win. That’s OK. This is who they are.

Maybe that understanding hit Belichick after watching what the Bills managed on Sunday. Perhaps he got caught up in the hype he helped deliver to New England himself, only to have some serious recognition of where his team is lacking. Instead of gaining the inside track to the Super Bowl in Los Angeles, his team is probably going to have to settle for a playoff game in Buffalo or Cincinnati. That can upset a lot of people.

But that’s who his Patriots are right now; a team that’s not ready, yet one good enough to tease. There’s a lot to like, but maybe we spent too much time pushing past success on a team trying to build its own identity.

It has one now.

Just not the one we had tried to force it into these last two months.