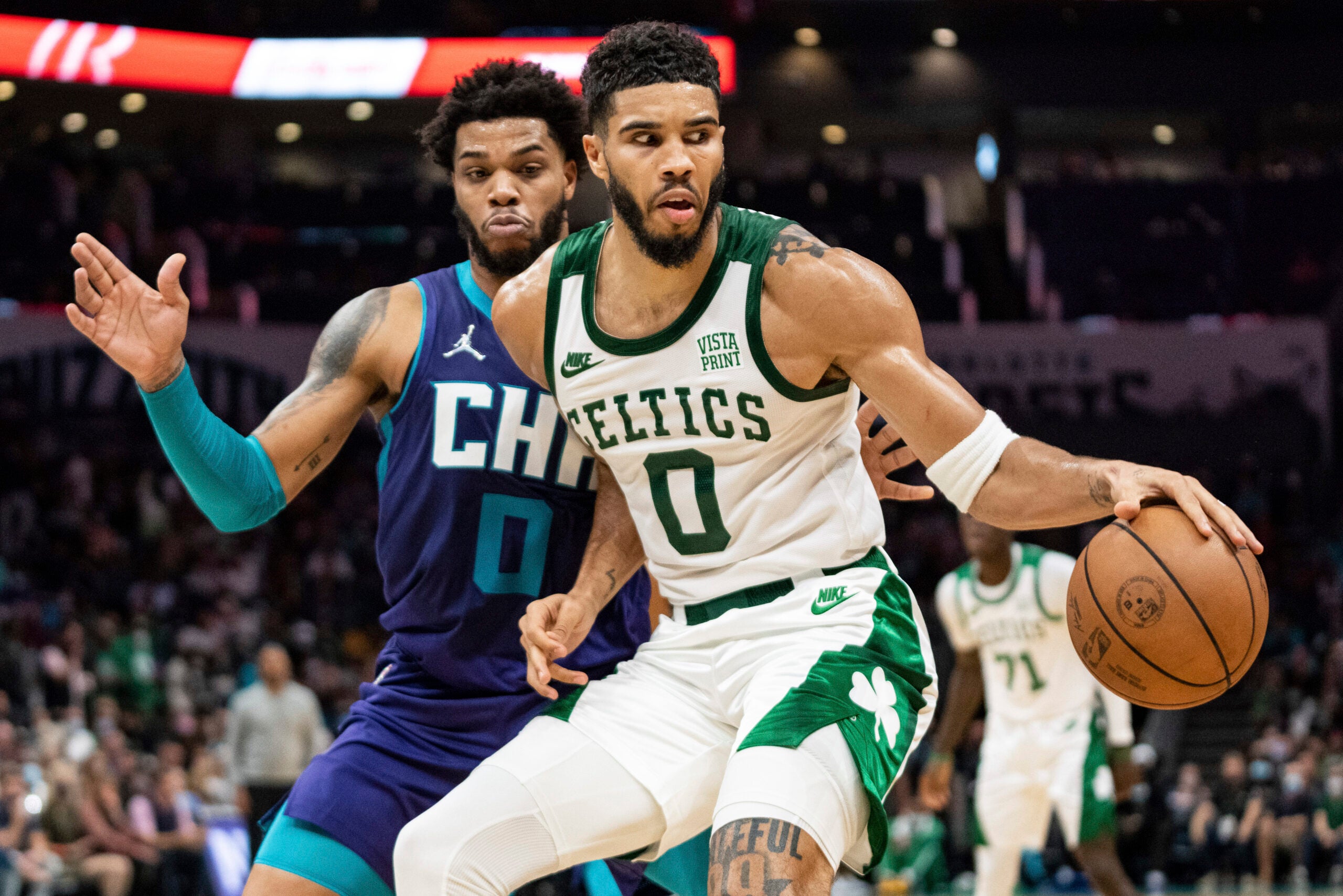 Here are the takeaways as the Celtics claimed an important win over a sizzling Hornets team with some help from their best players on Monday.

1. Jayson Tatum had 41 points. Jaylen Brown had 30, including the play of the game (more on that in a minute). So who was the player of the game?

If you ask Ime Udoka, the answer was … Marcus Smart — 3-for-12 from the floor, 1-for-9 from 3-point range, and 2-for-2 in enormous defensive plays down the stretch. Smart took some heat from Celtics fans for his shooting, but he once again reminded everyone late why the Celtics believe in him.

“I said it to the group in there, I said, ‘I don’t care about the 41 and the 30 from you guys, Marcus had the play of the game taking that last shot away from them,’” Udoka said. “… We know the toughness and heart and soul of our team comes from him.”

Smart said he played through a migraine and various other flu-like symptoms, and he wasn’t certain he would even be able to suit up. His teammates were glad he did.

“He may not get credit for having a great game, but defensively he won that game for us,” Brown said.

2. Tatum was brilliant — 41 points on 14-for-28 shooting in a performance that further buried questions about his 7-for-30 opener. He took 12 3-pointers and made six of them, and he earned seven trips to the free-throw line (as always: If Tatum gets to the line seven or more times, he’s probably going to have a good evening).

When Charlotte collapsed on Tatum, he took advantage — dishing out eight assists, including a crucial one to Rob Williams in the fourth quarter.

“I know I’m not perfect, but I try to do it all, and knowing I draw a lot of attention, finding guys in their spots, getting them easy, open looks,” Tatum said. “It just opens the game up when everybody else is scoring as well.”

If there’s a solitary criticism of Tatum’s performance, it might be his isolation-heavy possessions as regulation wound down, but when asked about them after the game, Udoka noted that the Celtics wanted to get LaMelo Ball iso’d on Tatum. If Brown joined the play, the Hornets would bring one of their better defenders into the mix.

Why the Celtics don’t run more pick-and-rolls with Tatum late is a different question, but as Udoka put it on Sunday: None of us have ever averaged 27 per game. The answer might simply be that a more complicated play runs more risk of something going wrong.

3. Tatum was the Celtics’ top scorer, but Brown had several of the biggest baskets, including the highlight of the year to date — a monstrous one-handed hammer on Miles Bridges in overtime that put the Celtics up five.

“I had to make up for the missed dunk in New York,” Brown said. “My teammates were teasing me a little bit. It was just a good play. Miles, obviously, is one of the better athletes in the league, so I knew that if I tried to lay it up, he was going to send it back to Boston. So I knew if I was going up, I was going up with bad intentions.”

4. Monday’s game felt like one of the first times we really saw Tatum and Brown feed off each other, and the results were intriguing. Even at their best in the past, Tatum and Brown sometimes felt like a Your-Turn-My-Turn pairing, but they made each other better on Monday and hurt the Hornets in a variety of ways. When Tatum drew a crowd, Brown knifed to the rim. When Brown heated up, Tatum broke open the resulting cracks in the defense. When one player went off the floor, the other picked up the slack seamlessly.

5. Robert Williams played 35 minutes, scored 12 points, pulled down 16 rebounds (six of which were offensive), dished out four assists, and blocked three shots. Against the smaller lineup, Williams dominated the offensive glass and soared over the top. Once again, he looked like a key piece of the puzzle.

The first two games offered a troubling view of the Celtics but a positive view of Williams. As the team finds some rhythm, the progress Williams made in nearly every facet looks amplified.

“His leap has been fantastic,” Brown said. “I’m looking forward to seeing him continue to grow. He can really pass, he rebounded excellent tonight. We’re looking for Rob to do that every single night.”

6. Dennis Schröder finished with 23 points, but his biggest contribution may have been getting the game under control in overtime when both Tatum and Brown suddenly started struggling to handle the ball. Schröder — a more natural ball-handler — seemed to calm everyone down, burying a triple and finding Brown for a spot-up three a few moments later that helped the Celtics reclaim the lead.

“The amount of open looks he’s missed that he’s going to start knocking down, he hasn’t really found a full rhythm yet or gotten a stride in these first few games, but we know what he is,” Udoka said. “He was just in Oklahoma City a few years ago, a guy that came off the bench and scored 20 points per game, and then would finish the game.

“So we feel it’s the same thing, when Jaylen or Jayson is off, or just one of them are on, we need that secondary playmaker and scorer. He’s doing it both ways. Not just the scoring, he had eight assists as well, only one turnover. So he’s doing exactly what we ask of him.”

7. Jabari Parker pitched in some surprisingly solid first-half minutes that helped the Celtics stay afloat against an early onslaught of 3-pointers by the Hornets. He finished with 13 points on 5-for-8 shooting.

8. Miles Bridges and LaMelo Ball warrant mention as an incredibly exciting young duo. Bridges is a spring-loaded athlete whose offensive game is much more advanced than last season. Meanwhile, the Celtics picked on Ball defensively, but Ball answered on the other end with 25 points including seven 3-pointers — one of which even fooled Smart.

Smart called Ball a “really good player” after the game but answered a question about the second-year guard with just a hint of salt.

“He’s going to get all the Overtime, House of Highlights, SportsCenter, and all that, but we got the win, and that’s all that matters,” Smart said.

9. The Celtics struggled defensively on Monday, but as Udoka noted, the effort was in stark contrast to last week’s debacle against the Raptors. Udoka said he believes the Raptors game was an aberration, brought about by the tough loss to New York two nights before.

“I feel like we’re building a good chemistry,” Williams said. “We may mess up a lot of plays, defensive tendencies too, but we fight at the end of the day. So as long as the effort is there and the fight is there, everything else will take care of itself.”